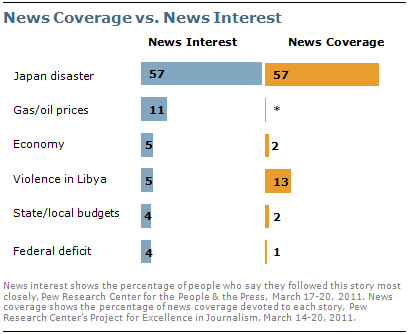 News about the aftermath of the deadly earthquake and tsunami in Japan dominated the public’s news interest and media coverage last week. The crisis at Japan’s nuclear plants – far more than other aspects of the story – captured the most public interest.

News about the disaster – most of which centered on the crisis at the damaged nuclear power plants – accounted for 57% of coverage for the week, according to the Pew Research Center’s Project for Excellence in Journalism (PEJ). That makes this one of the most covered stories since PEJ started its weekly analysis four years ago. Late in the week, another major international story – preparations for and the start of a military campaign by the U.S. and allies against Moammar Gadhafi’s forces in Libya –drew heavy coverage, according to PEJ. 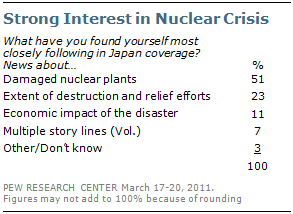 The nuclear emergency dominated news coverage as well. Fully 71% of all coverage of the Japan disaster was devoted to the damage to the country’s nuclear facilities, according to PEJ. 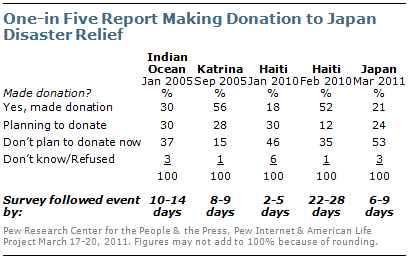 In the first days after the Japanese disaster, 21% of Americans say they have made a donation to help those affected by the earthquake and tsunami. Another 24% say they plan to make a donation.

More than a third of those who have already donated (36%) say they made their contribution digitally – online, through text messages or e-mail. Among those younger than 40, about as many have donated digitally as through more traditional methods. (For more on how Americans are 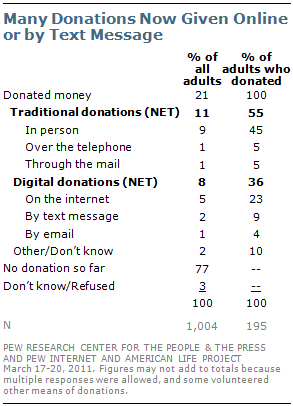 Less than a week after the January 2010 earthquake in Haiti, 48% said they either had (18%) or planned (30%) to make a donation to relief efforts there. But the number who actually donated rose quickly in the weeks following the quake. By early February, more than half (52%) said they had made a donation and another 12% said they still planned to do so.

Among those who gave, donations made through traditional methods – in person, over the telephone or by mail – are still more popular than donating digitally: 11% of the public (55% of those who have made a donation) have given to the Japan relief effort through traditional means, compared with 8% (36% of those who have made a donation) who have done so digitally (on the internet, by text message or via email. The balance between donations made traditionally and digitally was similar in the immediate aftermath of the Haiti earthquake. 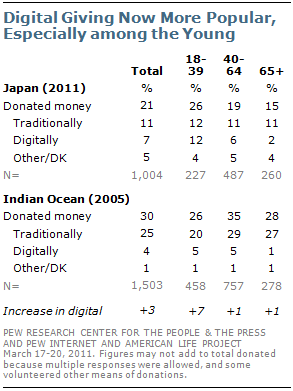 With most public and media attention focused on the aftermath of the disaster in Japan, Americans showed only modest interest in other news stories last week. Interest in Japan news was high across demographic and partisan groups. Half or more in every region say they followed this news very closely.

With most of the survey completed before airstrikes on Libya were launched by U.S. and allied forces, public interest in developments in Libya remained modest. About a quarter (26%) say they followed the conflict between rebels and government forces there very closely; 5% say this was the news they followed most closely. News about unrest in the Middle East accounted for 17% of coverage. Most of that (13%) focused on Libya.

These findings are based on the most recent installment of the weekly News Interest Index, an ongoing project of the Pew Research Center for the People & the Press. The index, building on the Center’s longstanding research into public attentiveness to major news stories, examines news interest as it relates to the news media’s coverage. The weekly survey is conducted in conjunction with The Project for Excellence in Journalism’s News Coverage Index, which monitors the news reported by major newspaper, television, radio and online news outlets on an ongoing basis. In the most recent week, data relating to news coverage were collected March 14-20, and survey data measuring public interest in the top news stories of the week were collected March 17-20, from a nationally representative sample of 1,004 adults.

Results for this survey are based on telephone interviews conducted March 17-20 among a national sample of 1,004 adults 18 years of age or older living in the continental United States (673 respondents were interviewed on a landline telephone, and 331 were interviewed on a cell phone, including 144 who had no landline telephone). The survey was conducted by interviewers at Princeton Data Source under the direction of Princeton Survey Research Associates International. A combination of landline and cell phone random digit dial samples were used; both samples were provided by Survey Sampling International. Interviews were conducted in English. Respondents in the landline sample were selected by randomly asking for the youngest adult male or female who is now at home. Interviews in the cell sample were conducted with the person who answered the phone, if that person was an adult 18 years of age or older.