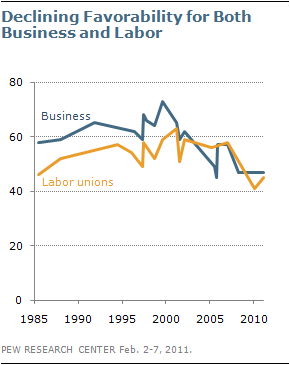 The favorability ratings for labor unions remain at nearly their lowest level in a quarter century with 45% expressing a positive view. Yet the public expresses similar opinions about business corporations – 47% have a favorable impression – and this rating is also near a historic low.

Americans express mixed views of the impact of labor unions on salaries and working conditions, international competitiveness, job availability and productivity. About half (53%) say unions have had a positive effect on the salaries and benefits of union workers, while just 17% say they have had a negative effect. Views are similar about the impact of unions on working conditions for all workers (51% positive, 17% negative). 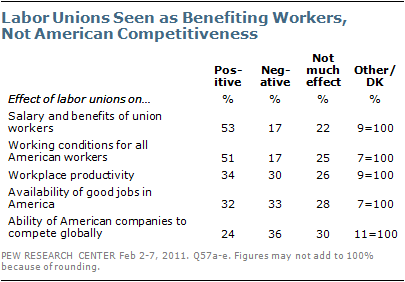 The latest national survey by the Pew Research Center for the People & the Press, conducted Feb. 2-7 among 1,385 adults, finds virtually no differences in opinions about private and public sector unions. 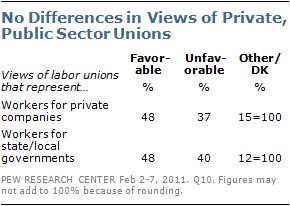 A previous Pew Research survey on proposals for balancing state budgets found more support for decreasing the pension plans of state government employees than for cutting programs or raising taxes. Even so, only about half (47%) favored decreasing government employee pensions to balance their state’s budget; an identical percentage said their state should not do this. (See “Fewer Want Spending to Grow, But Most Cuts Remain Unpopular,” Feb. 10, 2011.) 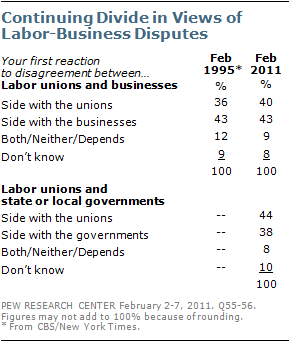 Opinions also are divided when people are asked for initial reaction to a disagreement between unions and state and local governments: 44% say that when they hear of such a dispute they side with unions, compared with 38% who say they side with governments.

Government data show that labor unions have become less of a factor in the overall U.S. economy in recent decades – most notably in the private sector. According to the U.S. Bureau of Labor Statistics (BLS), 11.9% of wage and salary workers in the United States belonged to unions in 2010. That is down slightly from the 12.3% in 2009, but much lower than the 20.1% that belonged to unions in 1983, the first year when comparable data are available. BLS also reports that now more public sector workers belong to a union than do private sector workers. 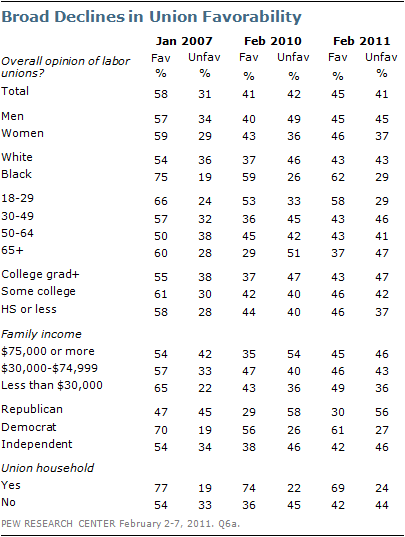 In the current survey, there is a little difference in opinions about labor unions based on education level or household income. Among many groups – but not all – opinions dropped between 2007 and 2010 and then made up some of that decline over the past year.

African Americans continue to offer more favorable opinions about labor unions than do whites. Currently, 62% of African Americans say they have a favorable view, compared with 43% of whites. Last year, the numbers were similar (37% for whites, 59% for blacks). Favorable opinions of labor unions among both whites and blacks were higher in 2007 (54% for whites, 75% for blacks). 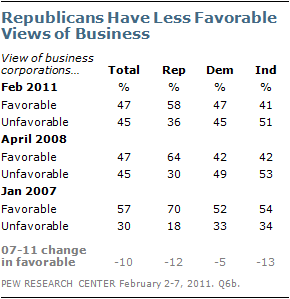 Currently, 47% say they have a favorable opinion of business corporations while 45% have an unfavorable opinion. These views are unchanged since April 2008, but are substantially less positive than in January 2007 (57% favorable, 30% unfavorable). Since early 2007, the favorability ratings for business corporations have fallen by 10 points while favorable ratings for unions have fallen by 13 points. 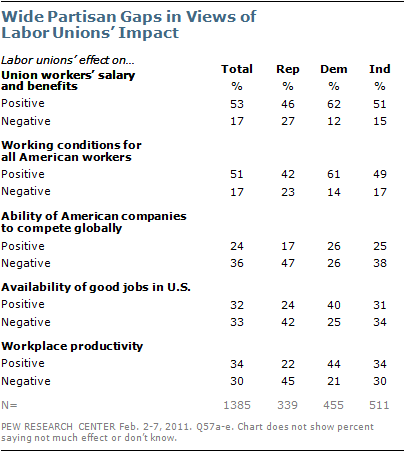 Democrats are much more likely to offer favorable opinions of unions than either Republicans or independents. Democrats also are less likely to say that unions have a negative impact on the ability of American companies to compete in a global marketplace and the availability of good jobs in the United States.

Republicans, though, are much more negative than Democrats about unions’ impact on America’s ability to compete globally, workplace productivity and the availability of good jobs in the U.S. Independents tend to fall in between. 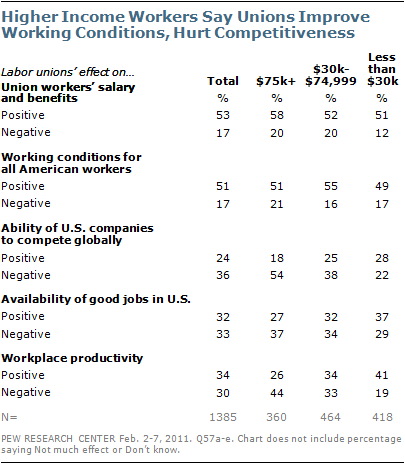 People across income levels say that labor unions have had a positive effect on both union members’ salaries and benefits and working conditions for all American workers. People with higher family incomes, however, are more critical of unions’ impact on American competitiveness and workplace productivity. 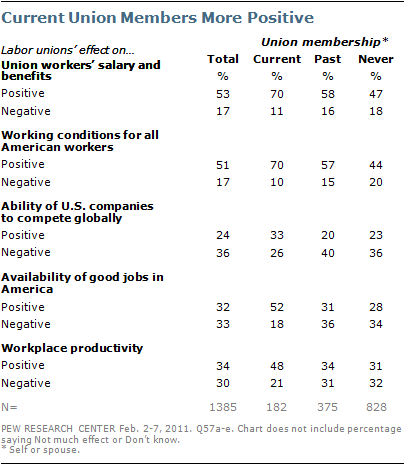 Households with current union members offer much more positive views on the impact of unions than those made up of former union members or people who have never belonged to a union.

For example, about half of those who say they or their spouse (52%) is currently a member of a labor union say unions have had a positive effect on the availability of good jobs in the United States. That drops to 31% among former union members and 28% among those never in a union.

Current union households also are more likely to say that unions have a positive effect on workplace productivity. Nearly half (48%) say this, compared with 34% of those in former union households and 31% among those never in a union. 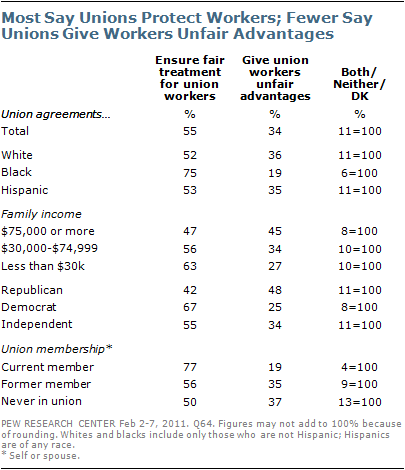 A majority of the public sees union agreements as ensuring fair treatment for union workers (55%), rather than giving union workers unfair advantages (34%).

Looking at union membership, 63% of those with household members ever in a union say union agreements ensure fair treatment for union workers. Half of those in households where neither spouse has ever belonged to a union agree.