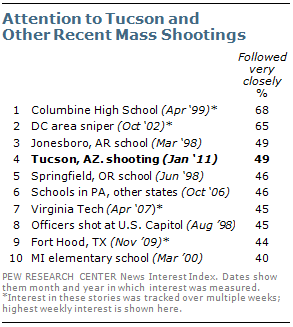 The aftermath of the deadly shooting rampage in Tucson, Ariz., dominated the public’s news interest last week as President Obama’s speech at a memorial service won praise – across party lines – among those who had read or heard about the event.

According to the latest News Interest Index survey, conducted Jan. 13-16 among 1,000 adults, Americans also followed news about the economy (37% very closely) and powerful winter storms that hit the east coast (35% very closely). But when the public is asked which story they followed most closely last week, both rank far behind the Tucson shootings.

The shootings and their aftermath also dominated media coverage, accounting for 57% of the newshole for the week, according to a separate analysis by the Pew Research Center’s Project for Excellence in Journalism (PEJ). 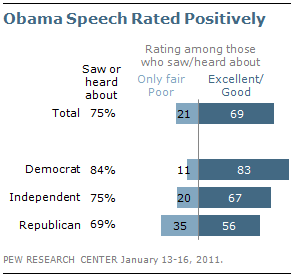 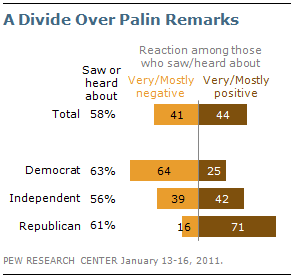 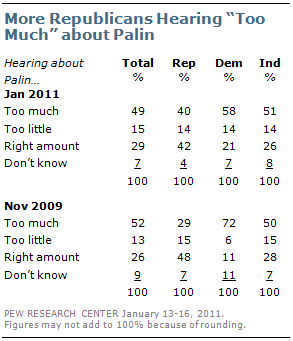 Currently, nearly six-in-ten Democrats (58%) say they are hearing too much about Palin, the 2008 Republican vice presidential candidate and a potential GOP candidate in 2012. Four-in-ten Republicans (40%) and 51% of independents say the same. In November 2009, amid the publicity for Palin’s book “Going Rogue,” 72% of Democrats said they were hearing too much about Palin, compared with 29% of Republicans and 50% of independents. 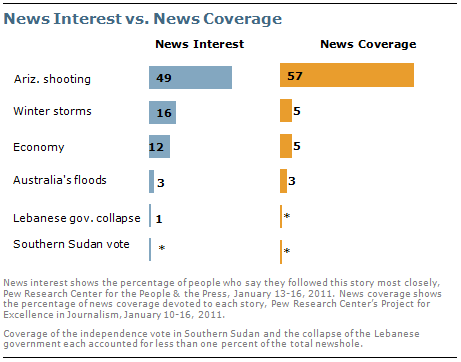 In a week dominated by news about the Tucson shootings, Americans continued to track news about the economy. Nearly four-in-ten (37%) say they followed economic news very closely, a level that has changed only slightly in recent weeks. Still, just 12% say this was the news they followed most closely.

About a third (35%) say they followed news about winter storms in the eastern United States very closely; 16% say this was the news they followed most closely. Not surprisingly, interest was highest in the north east and the south.

These findings are based on the most recent installment of the weekly News Interest Index, an ongoing project of the Pew Research Center for the People & the Press. The index, building on the Center’s longstanding research into public attentiveness to major news stories, examines news interest as it relates to the news media’s coverage. The weekly survey is conducted in conjunction with The Project for Excellence in Journalism’s News Coverage Index, which monitors the news reported by major newspaper, television, radio and online news outlets on an ongoing basis. In the most recent week,data relating to news coverage were collected January 10-16, and survey data measuring public interest in the top news stories of the week were collected January 13-16, from a nationally representative sample of 1,000 adults.

Results for this survey are based on telephone interviews conducted January 13-16, 2011 among a national sample of 1,000 adults 18 years of age or older living in the continental United States (670 respondents were interviewed on a landline telephone, and 330 were interviewed on a cell phone, including 134 who had no landline telephone). The survey was conducted by interviewers at Princeton Data Source under the direction of Princeton Survey Research Associates International. A combination of landline and cell phone random digit dial samples were used; both samples were provided by Survey Sampling International. Interviews were conducted in English. Respondents in the landline sample were selected by randomly asking for the youngest adult male or female who is now at home. Interviews in the cell sample were conducted with the person who answered the phone, if that person was an adult 18 years of age or older.

Summary of FindingsReaction to Palin Speech DividedToo Much Palin?The Week’s Other NewsAbout the News Interest Index