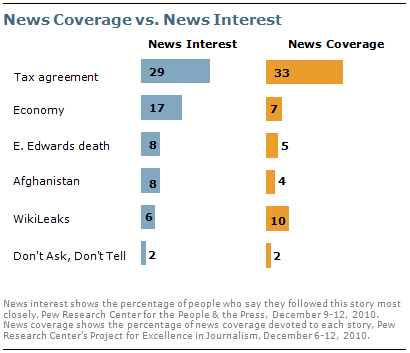 News about the economy – and efforts to spark greater growth – dominated news coverage as well. A third (33%) of news coverage last week focused specifically on the agreement reached between the White House and GOP leaders, according to a separate analysis by the Pew Research Center’s Project for Excellence in Journalism (PEJ). More general reporting on the economy accounted for another 7% of the newshole. People paid attention to both storylines: 69% say they followed news about the economy either very (39%) or fairly closely (30%), while 66% say they followed news about the tax deal either very (37%) or fairly closely (29%).

Like the fight over health care legislation earlier this year, the debate over taxes and the economy grabbed the public’s attention more than most Washington policy discussions – largely because it affects people so directly. In questions from the same survey released separately, 47% say the agreement will help people like themselves, while 25% think it will hurt people like themselves. Nearly half (48%) also say the agreement will help the economy, while 29% say it will hurt the economy. (See “Tax Cuts Win Broad Bipartisan Support” Dec. 13, 2010.)

Republicans are more likely than Democrats or independents to say they followed news about the tax agreement most closely last week (40% of Republicans vs. 29% of Democrats and 26% of independents.

Looking at other news, nearly one-in-ten (8%) say they followed reports about the death of Elizabeth Edwards more closely than any other major story. The death of Sen. John Edwards’ estranged wife accounted for 5% of coverage, according to PEJ. About two-in-ten (19%) say they followed news about Elizabeth Edwards’ death very closely, nearly matching the 17% that said in March 2007 they very closely followed the announcement that her breast cancer had returned. 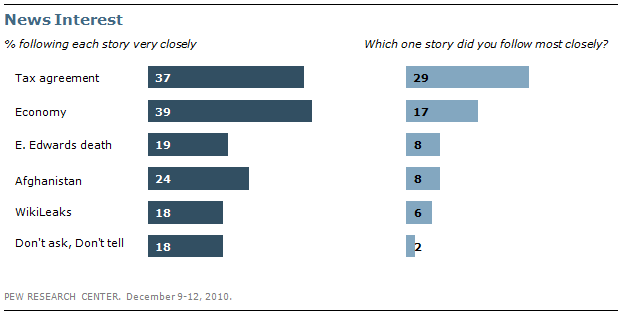 Partisan differences among those tracking this story are slim. Women, though, are more likely to say they followed news of Edwards’ death very closely than men (23% vs. 14%).

Just 6% say they most closely followed news about WikiLeaks and the arrest of its founder Julian Assange in England. The different threads of the WikiLeaks story accounted for 10% of coverage, down from 16% one week earlier.

About two-in-ten (18%) say they followed this story very closely. That’s also down from the previous week when 30% said they were very closely following news about WikiLeaks release of classified documents about U.S. diplomatic relations.

Another 2% say they most closely followed news about the status of the Pentagon’s “Don’t Ask, Don’t Tell” policy concerning gays and lesbians in the military. About two-in-ten (18%) say they followed this news very closely, down from 29% the previous week. News about efforts to end the policy accounted for 2% of coverage.

These findings are based on the most recent installment of the weekly News Interest Index, an ongoing project of the Pew Research Center for the People & the Press. The index, building on the Center’s longstanding research into public attentiveness to major news stories, examines news interest as it relates to the news media’s coverage. The weekly survey is conducted in conjunction with The Project for Excellence in Journalism’s News Coverage Index, which monitors the news reported by major newspaper, television, radio and online news outlets on an ongoing basis. In the most recent week, data relating to news coverage were collected December 6-12, and survey data measuring public interest in the top news stories of the week were collected December 9-12, from a nationally representative sample of 1,011 adults.

Results for this survey are based on telephone interviews conducted under the direction of Princeton Survey Research Associates International among a national sample of 1,011 adults living in the continental United States, 18 years of age or older, from December 9-12, 2010 (676 respondents were interviewed on a landline telephone, and 335 were interviewed on a cell phone, including 139 who had no landline telephone). Both the landline and cell phone samples were provided by Survey Sampling International. Interviews were conducted in English.