Results for this survey are based on telephone interviews conducted October 27-30, 2010 among a national sample of 3,005 adults 18 years of age or older living in the continental United States (2,005 respondents were interviewed on a landline telephone, and 1,000 were interviewed on a cell phone, including 439 who had no landline telephone). Interviewing was conducted by Princeton Data Source and
ABT SRBI Inc. under the direction of Princeton Survey Research Associates International. Both the landline and cell phone samples were provided by Survey Sampling International. Interviews were conducted in English. For detailed information about our survey methodology, see: https://www.pewresearch.org/politics/methodology/ 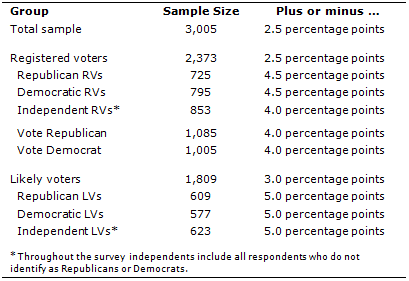 Likely voter estimates are based on a 7-item turnout scale that includes the following questions: thought, precinct, q9, oftvote, plan1, scale10 and pvote08a. Those who say they have already voted are automatically counted as likely voters. More details about the Pew Research Center’s methodology for estimating likelihood to vote are available at: https://www.pewresearch.org/politics/methodology/files/UnderstandingLikelyVoters.pdf