Reflecting today’s fragmented news landscape, about half of the public offers no specific answer when asked to name the journalist or newsperson they most admire. No journalist is named by more than 5% of the public in response to an open-ended question. While individual mentions are few, the most frequently named journalists continue to include both network anchors and cable hosts. However, there are fewer mentions of network news journalists in the latest survey than in 2007, while mentions of cable news hosts and anchors have held about steady. 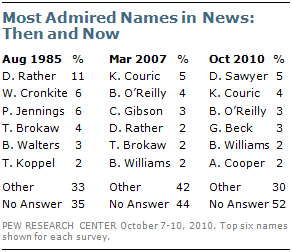 The decline in mentions of admired journalists is a response to a wider array of news choices. In 1985, nearly two-thirds (65%) could name a favorite journalist; 35% provided no answer. In 2007, 44% did not name anyone. Currently, 52% offer no name, according to the latest News Interest Index survey of 1,005 adults conducted Oct. 7-10 by the Pew Research Center for the People & the Press.

As was the case in 2007, no single person is named by more than 5% of the public, when respondents are asked which journalist or newsperson they most admire. But, in a shift over the past three years, cable newspeople are mentioned about as often as network news anchors and reporters; 17% name journalists or newspeople who are primarily seen on the traditional broadcast networks (ABC, CBS, NBC or PBS), while 16% name people who are primarily seen on cable news channels (CNN, Fox News or MSNBC). By contrast, in 2007 the balance tilted toward the network newspeople: 25% of Americans named network anchors or reporters, while 14% named cable newspeople.

Among individual journalists, Diane Sawyer is mentioned by 5%, Katie Couric by 4%, Bill O’Reilly by 3% and Glenn Beck by 3%. The differences in the percentages mentioning these news figures are not statistically significant.

Even a quarter century ago, when there were far fewer news choices, no single journalist was mentioned by more than about one-in-ten Americans. In 1985, Dan Rather, then the anchor of the CBS Evening News, was mentioned most frequently; 11% volunteered Rather as the newsperson they admired most.

Since then, the range of news options has expanded considerably. Pew Research’s most recent media consumption survey found that nearly as many Americans are now getting news on a given day from traditional and digital platforms (36%) as from traditional platforms alone (39%). (See “Americans Spending More Time Following the News,” Sept. 12, 2010).

The News Interest Index also finds that the public continued to focus most closely last week on news about the economy, while the media devoted the largest share of coverage to midterm elections. Separately, an increasing proportion of Americans say that, based on what they have read and heard, they think it is more likely that Republicans will regain a majority in the House of Representatives than that the Democrats will retain control; 50% expect the Republicans to win a majority, up from 41% in early September.

While about as many now mention cable news figures as network news figures, cable talk show hosts (including Bill O’Reilly, Glenn Beck, Sean Hannity, Jon Stewart and Keith Olbermann) account for the majority of cable figures mentioned. About one-in-ten (12%) now name a cable talk show host as their most admired journalist, while 5% name an anchor of a cable news program (for example, Anderson Cooper and Brit Hume). 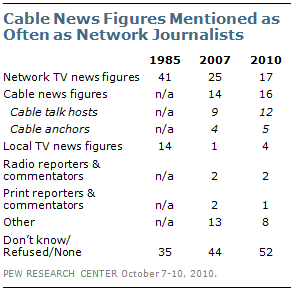 The proportion naming network news figures has declined from 25% to 17% since 2007. As was the case three years ago, evening news anchors – Sawyer, Couric and Brian Williams – are among the most frequently mentioned network journalists.

There are partisan differences in the type of journalist or news person likely to be mentioned. About a quarter of Republicans (23%) name a figure from cable news – 17% name cable talk hosts– while 14% name a network anchor or reporter. By contrast, just 11% of Democrats name a cable anchor or host while about a quarter (24%) name a broadcast network news figure. Independents are about as likely to mention a cable news personality (16%) as a network news personality (14%). 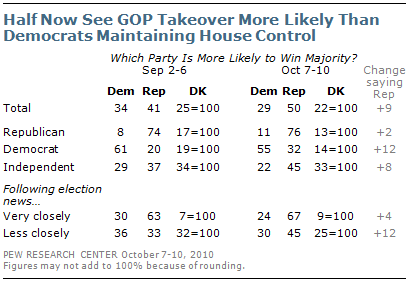 An increasing percentage of Americans now says they think Republicans are more likely to take control of the House of Representatives in the Nov. 2 elections than Democrats are to maintain their majority. Currently, half (50%) say they expect the Republican Party to regain a majority of seats in the House. That is up from 41% at the beginning of September.

About three-in-ten (29%) say they expect the Democratic Party to maintain its majority, down slightly from the 34% that said this Sept. 2-6.

Republicans remain about as confident as they were in early September, while increasing numbers of Democrats and independents now see a GOP takeover as more likely. Three quarters of Republicans (76%) say they think their party is more likely to win a majority. Though more than half of Democrats (55%) say they expect their party to hold on to its House majority, about a third (32%) now say they expect the GOP to take control; just 20% said this in early September. Among independents, 45% say they think it is more likely that the Republican Party will regain its majority, up slightly from 37%. 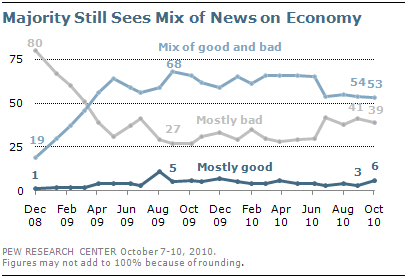 Most Americans continue to say they are hearing a mix of good and bad news about the nation’s still-struggling economy. Just more than half say this (53%), a number little changed since early July (54%).

With the survey in the field as the federal government released a jobs report that showed the unemployment rate hovering around 9.6%, few (6%) say they are hearing mostly good news about the economy. That’s comparable to most months this year. 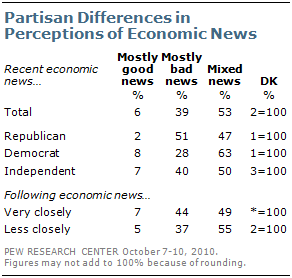 Among partisans, there has been little change since September. About half of Republicans (51%) say they are hearing mostly bad news, compared with 28% of Democrats and 40% of independents. More than six-in-ten Democrats (63%) say they are hearing a mix of good and bad economic news, compared with 47% of Republicans and 50% of independents. 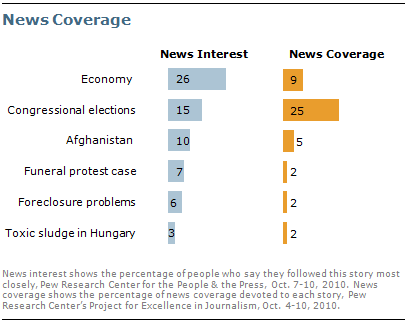 About two-in-ten (19%) say they very closely followed news about problems with how banks and other financial institutions have been handling foreclosures; 6% say this was the news they followed most closely. In terms of coverage, the nation’s economic troubles accounted for 11% of the newshole last week. That included 9% for economic news in general and 2% for news focused on the foreclosure problems, according to the Pew Research Center’s Project for Excellence in Journalism.

Nearly a quarter (23%) say they followed news about the upcoming midterm congressional elections very closely; 15% say this was the news they followed most closely. The media devoted 25% of coverage to the campaigns. That made the elections the most covered story of the week as has been the case for the past four weeks.

Among partisans, Republicans continue to track the elections more closely than Democrats. Three-in-ten Republicans (31%) say they followed election news very closely, compared with 21% of Democrats. Interest among independents (22% very closely) is similar to that among Democrats.

About two-in-ten (21%) say they followed news about the situation in Afghanistan very closely last week, while this was the top story for 10%. News about Afghanistan accounted for 5% of the newshole.

Nearly two-in-ten (18%) say they very closely followed news about a free speech case heard by the Supreme Court last week, while 7% say they followed news about the case more closely than any other news last week. The case, which involves a fundamentalist pastor’s anti-gay protests at the funeral of a soldier killed in Iraq, accounted for 2% of coverage.

About one-in-ten (11%) say they followed news about a deadly spill of toxic sludge in Hungary very closely; 3% say they followed this news most closely. The spill accounted for 2% of the newshole examined by PEJ. 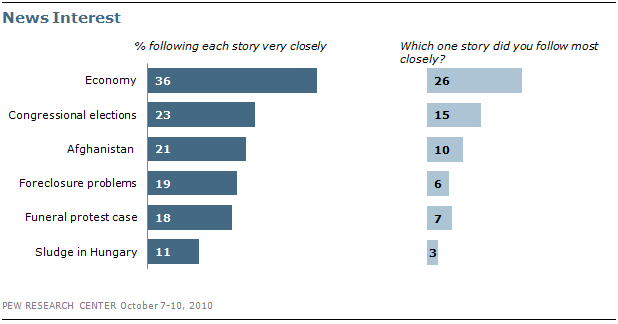 These findings are based on the most recent installment of the weekly News Interest Index, an ongoing project of the Pew Research Center for the People & the Press. The index, building on the Center’s longstanding research into public attentiveness to major news stories, examines news interest as it relates to the news media’s coverage. The weekly survey is conducted in conjunction with The Project for Excellence in Journalism’s News Coverage Index, which monitors the news reported by major newspaper, television, radio and online news outlets on an ongoing basis. In the most recent week, data relating to news coverage were collected October 4-10, and survey data measuring public interest in the top news stories of the week were collected October 7-10, from a nationally representative sample of 1,005 adults.

Results for this survey are based on telephone interviews conducted under the direction of Princeton Survey Research Associates International among a national sample of 1,005 adults living in the continental United States, 18 years of age or older, from October 7-10, 2010 (673 respondents were interviewed on a landline telephone, and 332 were interviewed on a cell phone, including 152 who had no landline telephone). Both the landline and cell phone samples were provided by Survey Sampling International. Interviews were conducted in English.