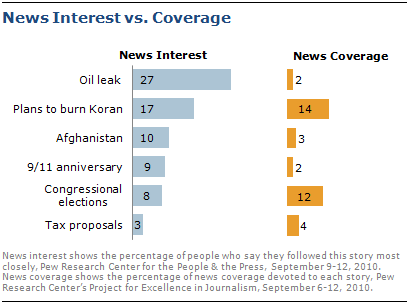 As the nation marked the ninth anniversary of the Sept. 11 terror attacks last week, many in the public and the media focused more on current tensions over Islam in America – most notably plans by a Florida pastor to burn copies of the Koran.

Nearly two-in-ten (17%) say they followed the controversy over the pastor’s announcement that he would burn Korans on Sept. 11 more closely than any other major story. The burning did not happen, but the story ranked second on the list of stories followed most closely, according to the latest News Interest Index survey of 1001 adults by the Pew Research Center for the People & the Press. Another 9% say they followed news about the Sept. 11 anniversary most closely.

The media devoted 15% of the newshole last week to news dealing with anti-Muslim sentiments. Most of that (14%) focused on Pastor Terry Jones’ plans and the push to get him to cancel the Koran burning, according to the Pew Research Center’s Project for Excellence in Journalism (PEJ). An additional 4% of coverage focused on the continuing debate over a planned Muslim community center and mosque near the site of the World Trade Center towers in downtown Manhattan.

Despite the attention to religious controversies, Americans say they followed news about the major oil leak in the Gulf of Mexico – now stopped – more closely than other major news stories (27%). News about the spill, however, was limited (2% of the newshole). With coverage now focused on blame for the spill and its uncertain environmental impact, the public’s continued interest likely also reflects the story’s perceived importance.

Following the April 20 oil rig explosion in the gulf that left 11 dead, interest in the story grew and stayed hig 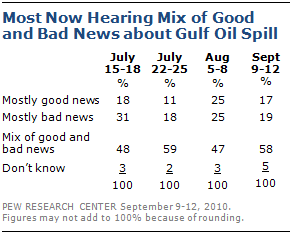 h as the massive scale of the spill became clear and repeated efforts to stem the flow of oil failed. The story dominated the public’s interest for weeks.

Two months later, most Americans (58%) say they have been hearing a mix of good and bad news about the oil spill, up from 47% when the question was last asked Aug. 5-8. Fewer say they are hearing mostly bad news (19%) than in early August (25%), though the proportion hearing mostly good news is also down (from 25% to 17%). 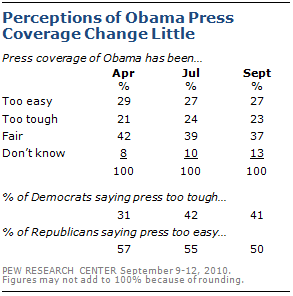 More Americans (37%) say that press coverage of Barack Obama has been fair than say it has been too easy (27%) or too tough (23%). Those numbers are largely unchanged from July or April.

Just more than four-in-ten (43%) say press coverage of Democratic leaders has been fair, 26% say too easy and 12% say too tough. Partisan views of coverage of party leaders are also little changed.

Americans paid close attention last week to three story lines with links to the events of Sept. 11, 2001. In addition to interest in the possible Koran burning (33% very closely), the public also very closely tracked news about developments in Afghanistan (30%) and Sept. 11 anniversary commemorations (33%).

One-in-ten say they followed news about the current situation and events in Afghanistan most closely last week, while news about the war there accounted for 3% of coverage, according to PEJ.

These findings are based on the most recent installment of the weekly News Interest Index, an ongoing project of the Pew Research Center for the People & the Press. The index, building on the Center’s longstanding research into public attentiveness to major news stories, examines news interest as it relates to the news media’s coverage. The weekly survey is conducted in conjunction with The Project for Excellence in Journalism’s News Coverage Index, which monitors the news reported by major newspaper, television, radio and online news outlets on an ongoing basis. In the most recent week, data relating to news coverage were collected September 6-12, and survey data measuring public interest in the top news stories of the week were collected September 9-12, from a nationally representative sample of 1,001 adults.

Results for this survey are based on telephone interviews conducted under the direction of Princeton Survey Research Associates International among a national sample of 1,001 adults living in the continental United States, 18 years of age or older, from September 9-12, 2010 (671 respondents were interviewed on a landline telephone, and 330 were interviewed on a cell phone, including 130 who had no landline telephone). Both the landline and cell phone samples were provided by Survey Sampling International. Interviews were conducted in English.