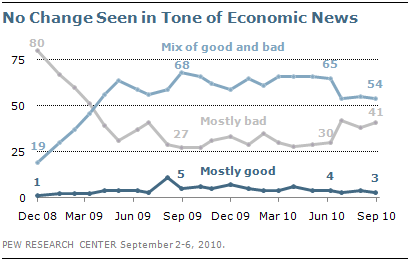 The public’s perceptions of economic news remain mixed, but continue to be much more negative than they were earlier this year.

The latest News Interest Index survey of 1,002 adults by the Pew Research Center for the People & the Press finds that the economy topped the public’s news interest last week; 29% say they followed news about the economy more closely than other major stories. Hurricane Earl was the top story in terms of news coverage, accounting for 13% of the newshole, according to a separate analysis by the Pew Research Center’s Project for Excellence in Journalism (PEJ). The economy accounted for 9% of coverage, putting it second on the PEJ list. 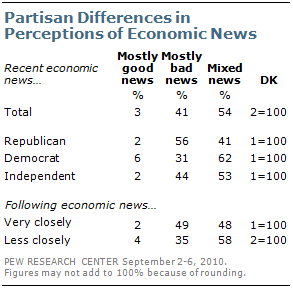 However, those who are tracking economic news very closely have a more negative perception of what they are hearing about the economy. Currently, about half (49%) of those tracking economic news very closely say the news is mostly bad, up from 41% last month. Opinions among those who are following this news less closely are essentially unchanged (35% mostly bad now, 36% in August).

Views of News about Jobs, Housing, Markets and Prices 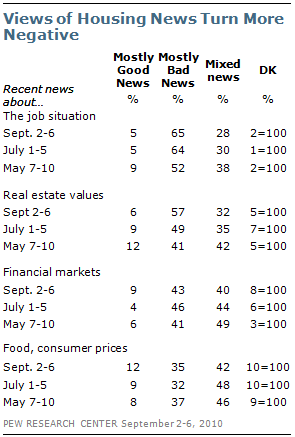 The changing perceptions came amid reports about plunging housing sales in July – despite low mortgage interest rates. There are no significant differences among partisans on this question.

Views of other aspects of the economy show little change since July. Amid continuing high unemployment, 65% say they are hearing mostly bad news about the job situation. A similar percentage said this in July (64%), though that represented a jump from 52% in May.

Which Party Will Control the House? 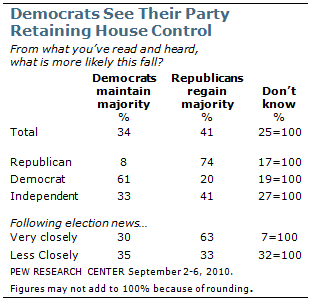 About four-in-ten Americans (41%) say that – from what they have read and heard – they think it is more likely that Republicans will regain a majority of seats in the House than the Democrats will maintain their majority (34%) in the 2010 elections. Those numbers are essentially unchanged from when the question was first asked July 15-18. At that point, 40% said the GOP would take control and 33% said Democrats would hold on to enough seats to maintain their majority.

Among those following election news very closely, more than twice as many say Republicans are more likely to gain control of the House than Democrats are to maintain their majority (63% vs. 30%). Among those following less closely, 35% see the Democrats holding on to their majority, 33% see the Republicans gaining control and 32% say they do not know.

Views among partisans are essentially unchanged since mid-July. About three-quarters of Republicans (74% in both surveys) say they think it is more likely that the GOP will regain a majority than the Democrats will hold on to theirs (8% now, 11% in July). On the other hand, Democrats are as likely as they were in July (61% in each survey) to say their party will hold on to its majority. Two-in-ten say Republicans are more likely to gain control, about the same as the 21% that said this in July. 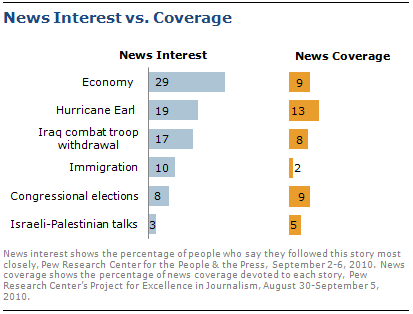 News about the economy topped the public’s news interest last week, but Americans also showed strong interest in Hurricane Earl and news about the withdrawal of U.S. combat troops from Iraq.

Nearly one-in-ten (8%) say they followed news about this year’s congressional elections most closely; 26% say they followed this news very closely. News about primaries and the fight for control of Congress accounted for 9% of coverage.

On three of last week’s top stories, Republicans showed greater interest than Democrats or independents. Close to four-in-ten Republicans (39%) say they followed news about the 2010 elections very closely, compared with 23% of Democrats and 21% of independents.

These findings are based on the most recent installment of the weekly News Interest Index, an ongoing project of the Pew Research Center for the People & the Press. The index, building on the Center’s longstanding research into public attentiveness to major news stories, examines news interest as it relates to the n
ews media’s coverage. The weekly survey is conducted in conjunction with The Project for Excellence in Journalism’s News Coverage Index, which monitors the news reported by major newspaper, television, radio and online news outlets on an ongoing basis. In the most recent week, data relating to news coverage were collected August 30-September 5, and survey data measuring public interest in the top news stories of the week were collected September 2-6, from a nationally representative sample of 1,002 adults.

Results for this survey are based on telephone interviews conducted under the direction of Princeton Survey Research Associates International among a national sample of 1,002 adults living in the continental United States, 18 years of age or older, from September 2-6, 2010 (672 respondents were interviewed on a landline telephone, and 330 were interviewed on a cell phone, including 126 who had no landline telephone). Both the landline and cell phone samples were provided by Survey Sampling International. Interviews were conducted in English.