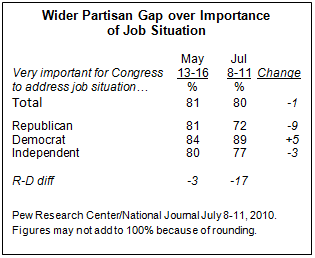 The latest Pew Research/National Journal Congressional Connection Poll, sponsored by SHRM, which was conducted July 8-11 among 1,001 adults, finds a growing partisan gap over the importance of Congress addressing the job situation. Nearly nine-in-ten Democrats (89%) view jobs as a very important priority for lawmakers to address, compared with 72% of Republicans. In May, comparable percentages of Democrats (84%) and Republicans (81%) said that it was very important for Congress to address the job situation.

Since May, partisan differences also have increased over the importance of addressing the country’s energy needs. Nearly eight-in-ten Democrats (79%) see this as a very important objective for Congress, compared with 63% of independents and just 52% of Republicans.

More Democrats than Republicans also continue to view stricter regulation of financial institutions as a very important priority for Congress (65% vs. 39%). These opinions have changed little from May. By contrast, there are no significant partisan differences in views of the importance of reducing the federal budget deficit and addressing immigration policy.

Notably, nearly identical percentages of Republicans view reducing the federal budget deficit (73%) and addressing the job situation (72%) as very important. Far more Democrats rate jobs as very important than say that about deficit reduction (89% vs. 69%). Independents also place greater priority on addressing jobs than on reducing the deficit, though by a smaller margin (77% vs. 67%). 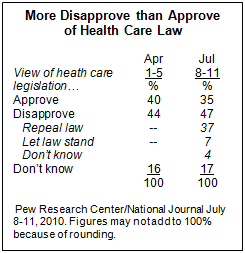 Public opinion toward health care legislation remained very stable in the months leading up to the bill’s passage, and that has continued to be the case. Opinion about the legislation is somewhat more favorable among those younger than 30 than among older Americans; still, nearly as many young people disapprove (38%) as 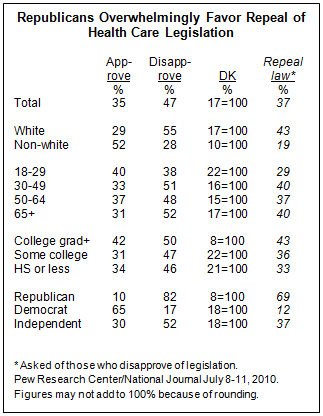 (For more on public attitudes toward health care legislation prior to passage, see “Gloomy Americans Bash Congress, Are Divided on Obama” March 18, 2010.)

MORE OPPOSITION THAN SUPPORT FOR U.S. CHALLENGE OF ARIZONA LAW 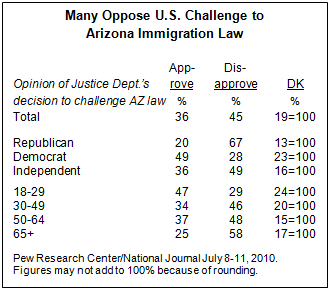 Just under half (45%) say they disapprove of the federal government’s decision to file a lawsuit seeking to overturn the law; 36% say they approve of the move, according to the latest Pew Research/National Journal Congressional Connection Poll, sponsored by SHRM. About two-in-ten (19%) say they do not know.

There are large partisan differences over support for the federal lawsuit challenging the Arizona law. By a margin of more than three-to-one (67% to 20%), Republicans disapprove of the suit filed by the Obama administration on July 6, while more Democrats (49%) approve of the decision than disapprove (28%). Independents mirror the public as a whole (36% approve, 49% disapprove).

In late June, a Pew Research survey found broad support for the Arizona measure. The law, set to take effect July 29, gives police greater authority to investigate the legal status of anyone they have stopped or arrested if they suspect that the person is in the country illegally. By two-to-one (64% to 32%), more said they favored than opposed the law. More than eight-in-ten Republicans (84%) said they approved of the law, along with 65% of independents. Democrats were divided (50% approved, 46% disapproved).

In addition to support for the Arizona law, the June survey found strong support for providing a way for illegal immigrants currently in the country to gain legal citizenship if they pass background checks, pay fines and have jobs. Support for the so-called path to citizenship had increased somewhat from 2009 (from 63% to 68%). 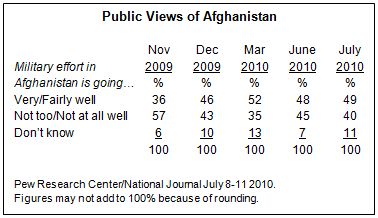 Public opinion about the war in Afghanistan has been relatively stable over the last several months. Today, a 49% plurality says that the military effort in Afghanistan is going very (9%) or fairly (40%) well, while 40% say the effort is going not too (31%) or not at all (9%) well.

Opinion about the war is little changed since a Pew Research Center poll conducted in the middle of last month. A week before Gen. David Petraeus took over command of U.S. forces in Afghanistan from Gen. Stanley McChrystal, 48% of Americans said things were going well in Afghanistan while 45% said they were not going very well.

The latest Pew Research/National Journal Congressional Connection Poll, sponsored by SHRM, which was conducted July 8-11 among 1,001 adults, also finds that the public is divided over whether the United States and NATO should keep military
troops in Afghanistan until the situation has stabilized. Nearly half (47%) say the troops should remain until the situation is stable, while 42% say they should be removed as soon as possible. This is largely unchanged from mid-June, when 53% favored keeping U.S. and NATO troops in Afghanistan and 40% were opposed.

There continue to be partisan differences in views of how soon to bring troops home from Afghanistan. Today, just 36% of Democrats say that troops should remain until the situation in Afghanistan is stabilized while 51% say they should be removed as soon as possible. Republicans by greater than two-to-one (65% to 26%), favor maintaining troops in Afghanistan. Independents are divided over whether U.S. and NATO forces should remain (46%) or be removed (44%).