Americans have been highly focused on the massive earthquake that struck Haiti Jan. 12. Not only is the disaster clearly the public’s top news story, fully 70% say it is the story they are talking about with friends. 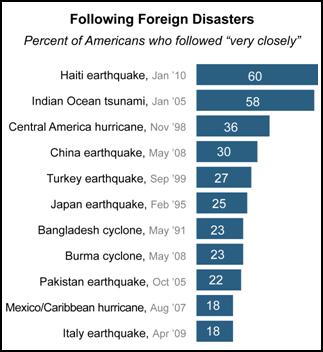 The public is not only closely tracking news from Haiti: In the days following the quake, 18% report they or someone in their household made a donation to those affected by the earthquake, while another 30% say they plan to donate. Americans took full advantage of new technologies to give to the victims of the earthquake. While 39% of those who gave made a donation in person, 23% gave on the internet and 14% gave via text message; by comparison, 12% gave by phone and just 5% made their donation through the mail.

The latest surveys by the Pew Research Center were conducted in the days following the Jan. 12 Haitian earthquake. A survey conducted Jan. 14-17 among 1,003 adults tracked the public’s response to the earthquake and views of the U.S. government’s handling of the crisis. Pew Research’s regular weekly News Interest Index survey, conducted Jan. 15-18 among 1,021 adults focused on public attentiveness to news about the earthquake and ratings of press coverage of the disaster.

Obama and Government Get Good Marks

Nearly two-thirds of the public (64%) approves of the way that Barack Obama’s administration has handled the situation in Haiti. Even a majority of Republicans (51%) approve of Obama’s handling of the crisis while just 19% disapprove. Obama gets much more positive ratings from independents (68% approve) and Democrats (76%).

Nearly Half Have Given or Plan to Donate

In the days following the earthquake that struck Haiti, 18% of Americans say they or someone in their household made a donation to help those affected by the catastrophe and 30% say they are planning to make a donation. Another 46% do not think they will donate right now.

In the aftermath of Hurricane Katrina, 56% of Americans reported making a donation to the victims. After the tsunami struck several Southeast Asian nations, 30% said they had made a donation.

It is important to note, however, that the current survey on reactions to the Haitian earthquake was conducted within the week following the actual disaster, while the surveys conducted after Hurricane Katrina and the 2004 tsunami were done one or two weeks later.

As might be expected, there are sizable socio-economic differences in reported donations and intentions to donate to earthquake relief efforts. A quarter (25%) of those with family incomes of $75,000 or more say they have made a donation to help Haitian earthquake victims, compared with just 10% of those with incomes of less than $30,000.

There also is a sizable regional gap in reported donations to those affected by the earthquake: 27% of those living in the Northeast say they have given to Haitian relief; that compares with 17% in the South, 16% in the West and 14% in the Midwest. In addition, more Catholics (24%) than Protestants (15%) say they have made a donation.

About as many non-Hispanic whites (19%) as non-Hispanic African Americans (16%) say they have already donated to Haitian relief. But 44% of blacks say they are planning to give to those affected by the earthquake compared with only 28% of whites.

Technology played a less important role as a conduit for charitable donations after the Indian Ocean tsunami in late 2004. At that time 59% said they had donated in person; email and text messages were not asked about. Notably, more than three times as many people said they donated to tsunami relief by mail in early 2005 than say that about Haiti today (17% vs. 5%).

More than one-in-ten Americans (13%) – including 24% of those younger than 30 – say they have gotten or shared information about the Haiti earthquake through Facebook, Twitter or another social networking site. The same percentage (13%) has sent or received email about the disaster while 6% have sent or received text messages about Haiti.

Among those younger than 30, however, about twice as many have used social networks than have used email to communicate about the disaster (24% vs. 11%). Among older age groups, email is used about as often as social networks.

About a third of young people (35%) say they have used one or more of these methods – social networks, email or text messages – to communicate about the earthquake. That compares with 30% of those 30 to 49 and smaller proportions of older age groups.

Where People Are Getting their News

Fewer (18%) say they have gotten most of their news from newspapers. After Katrina, far more (35%) cited newspapers as their main source of information.

The Fox News Channel and CNN are cited by about the same number of Americans (20% and 17%, respectively) as their main television source. CNN had a much larger lead over Fox News in 2005, when 31% cited it as their main source of news about Katrina and 22% cited Fox.

The most widely used online sources of news about the Haiti earthquake are Yahoo and CNN. Nearly one-in-ten Americans volunteer Yahoo (9%) or CNN (8%) as one of the places they have gotten most of their news about Haiti. About half as many cite MSNBC (4%) or Fox (4%) as primary internet sources. To put these figures in perspective, roughly as many Americans are relying on Yahoo or CNN.com for news about Haiti as the NBC (10%), ABC (8%) or CBS (7%) broadcast networks. And as many Americans say they are getting most of their news from MSNBC.com (4%) as the MSNBC network (4%).

While 13% of Americans say they have gotten or shared information about the earthquake through Facebook, Twitter or another social networking site, relatively few list these sites as a place where they have gotten most of their news. Overall, just 1% of Americans list either Facebook or Twitter as websites that have been among their top sources of information about this event.

With 15% of young people saying they are getting most of their news about Haiti from Yahoo.com, that single website rivals newspapers as a general category (17%) within this age group. For the most part, the same websites are widely used across age groups, with Yahoo, CNN, MSNBC, Fox and Google consistently topping the list. While 24% of 18-29 year olds say they have gotten or shared information about the earthquake on social networking websites, just 2% list Facebook or Twitter as places where they have gotten most of their news about events in Haiti.

About eight-in-ten Americans give the press excellent (35%) or good (46%) ratings for coverage of the earthquake. These are higher marks than the press got for its initial coverage of Hurricane Katrina (28% excellent, 37% good) in 2005. But such high ratings are not unprecedented. In the days following the Sept. 11, 2001 terrorist attacks, 56% said the press was doing an excellent job covering the story, and another 33% said it was doing a good job.

Currently, women are more likely than men to give the media “excellent” ratings for Haiti earthquake coverage (41% vs. 28%), and Democrats (41%) are more likely to give excellent ratings than are Republicans (28%).

Most Americans (69%) say the press is giving the r
ight amount of coverage to the earthquake in Haiti; 19% say the story is getting too much coverage and 10% say it is getting too little attention.

Close to six-in-ten (57%) say they followed news about the earthquake more closely than any other major story last week. That’s much greater than interest in the next two stories, the health care debate and the condition of the economy, which have routinely been among the public’s top stories for months.

Most Americans say they heard at least a little last week about Senate Majority Leader Harry Reid’s 2008 comments about then-Sen. Barack Obama’s race. Reid had said that he believed Obama would appeal to white voters because he was “light skinned” and did not speak with a “Negro dialect.” Four-in-ten say they heard a lot about Reid’s comments, which became public with the release of a new political book, while 37% say they heard a little about these comments.

Most Americans also had heard at least a little about former baseball slugger Mark McGwire’s admission that he used steroids when playing baseball, including the year he broke the single season home run record. Three-in-ten say they heard a lot about this story, while 55% say they heard a little. Just 15% say they heard nothing at all.

A smaller percentage of Americans heard about televangelist Pat Robertson saying immediately after the Haiti earthquake that the nation had been cursed because of a pact made with the devil 200 years ago. Some 15% heard a lot about this, while 33% say they heard a little. About half (52%) say they had heard nothing at all about this.

Some results in this report are based on telephone interviews conducted under the direction of Princeton Survey Research Associates International among a national sample of 1,003 adults living in the continental United States, 18 years of age or older, from January 14-17, 2010, (672 respondents were interviewed on a landline telephone, and 331 were interviewed on a cell phone, including 123 who had no landline telephone. Both the landline and cell phone samples were provided by Survey Sampling International. Interviews were conducted in English.

The combined landline and cell phone sample are weighted using an iterative technique that matches gender, age, education, race/ethnicity, region, and population density to parameters from the March 2009 Census Bureau’s Current Population Survey. The sample is also weighted to match current patterns of telephone status and relative usage of landline and cell phones (for those with both), based on extrapolations from the January-June 2009 National Health Interview Survey. The weighting procedure also accounts for the fact that respondents with both landline and cell phones have a greater probability of being included in the combined sample and adjusts for household size within the landline sample. Sampling errors and statistical tests of significance take into account the effect of weighting.

The error attributable to sampling that would be expected at the 95% level of confidence for the total sample is plus or minus 4 percentage points. In addition to sampling error, one should bear in mind that question wording and practical difficulties in conducting surveys can introduce error or bias into the findings of opinion polls.

Other results in this report are from the News Interest Index, a weekly survey conducted by the Pew Research Center for the People & the Press aimed at gauging the public’s interest in and reaction to major news events.

This project has been undertaken in conjunction with the Project for Excellence in Journalism’s News Coverage Index, an ongoing content analysis of the news. The News Interest Index survey collects data from Friday through Monday to gauge public interest in the most covered stories of the week. News Coverage Index data were not available for the week of January 11-17, 2010.

Results for the weekly surveys are based on landline telephone interviews among a nationwide sample of approximately 1,000 adults, 18 years of age or older, conducted under the direction of ORC (Opinion Research Corporation). For results based on the total sample, one can say with 95% confidence that the error attributable to sampling is plus or minus 4 percentage points.

In addition to sampling error, one should bear in mind that question wording and practical difficulties in conducting surveys can introduce error or bias into the findings of opinion polls, and that results based on subgroups will have larger margins of error.

For more information about the Project for Excellence in Journalism’s News Coverage Index, go to www.pewresearch.org/journalism.