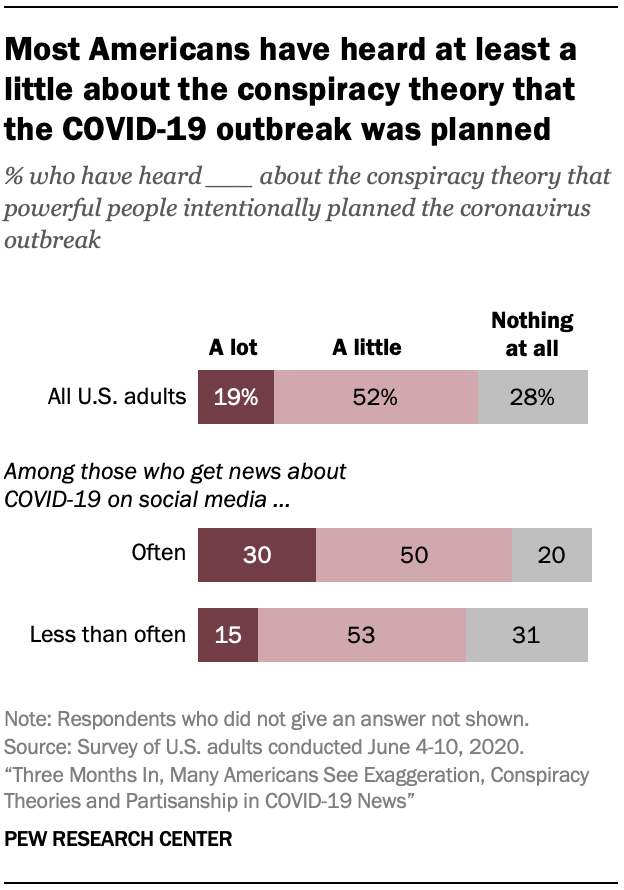 A conspiracy theory video suggesting, among other things, that the COVID-19 pandemic was planned received national attention in early May. While only one-in-ten Americans say they watched any of the video itself, far more have heard of the broader theory that powerful people intentionally planned the coronavirus outbreak.

Roughly equal shares of each party (72% of Republicans and those who lean toward the GOP and 70% of Democrats and Democratic leaners) say they have heard at least a little about the conspiracy theory. 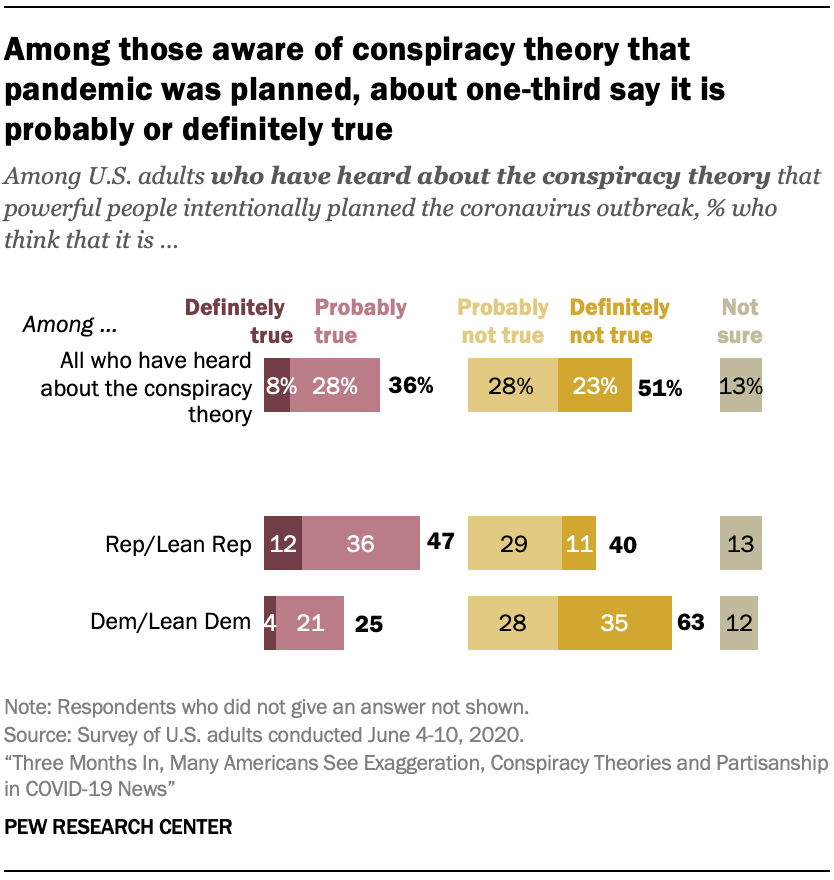 Among those who are aware of the conspiracy theory, substantial portions give it some credence, though Americans overall are more likely to say it is probably or definitely not true.

About a third of those who have heard this claim (36%) – a quarter of all U.S. adults – say that they think it is “definitely” (8%) or “probably” (28%) true. Meanwhile, roughly half of those aware of the conspiracy theory (51%) say it is false, including 23% who say it is “definitely not true.” Another 13% of those who have heard of the claim that the pandemic was planned say that they are not sure whether it is true or not. 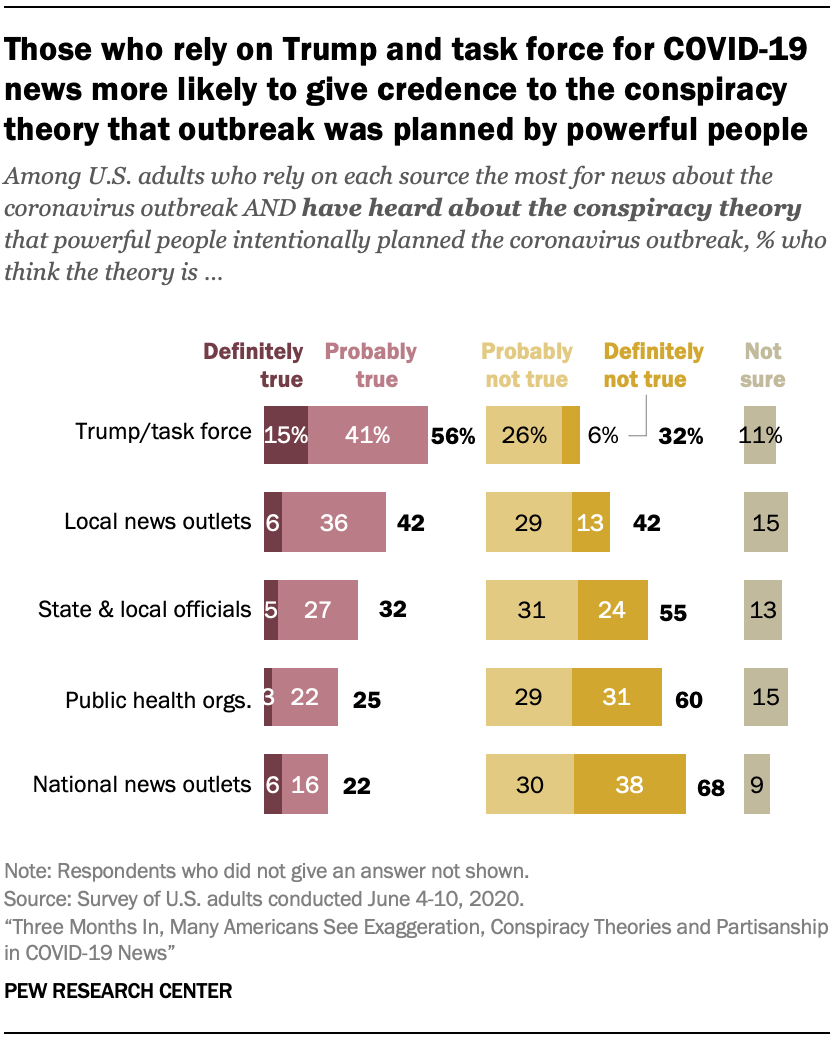 Americans’ assessments of this theory also differ substantially based on the sources of information they turn to most for news about the outbreak. Among Americans who have heard of the claim that powerful people planned the pandemic, a majority of those who mainly rely on Trump and the White House task force for COVID-19 news (56%) say the conspiracy theory is probably or definitely true. That outpaces those who rely most on local news outlets (42% who have heard of the theory think it is likely true), state and local officials (32%), public health organizations (25%) and national news outlets (22%). Those who rely mainly on national news outlets and are aware of the theory are most likely to say the theory is probably or definitely not true (68%). 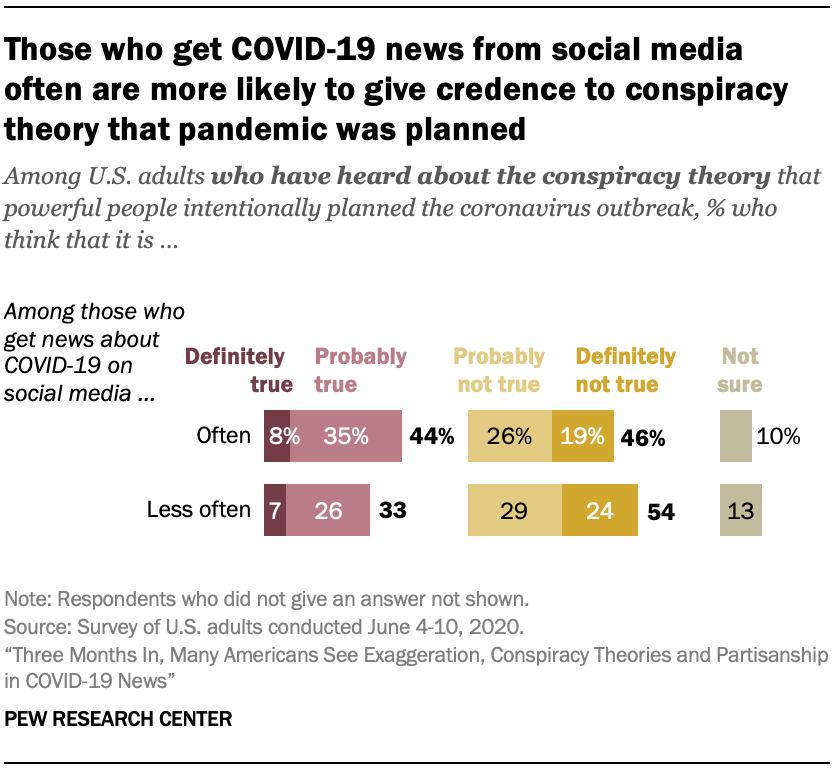 The “Plandemic” video that went viral in early May, which specifically claimed that the COVID-19 outbreak was part of a scheme by global elites to profit off of infectious diseases, has had a far narrower reach than the more general conspiracy theory that the outbreak was planned by people in power. Just 10% of Americans say they have watched the video, including only 4% who say they have watched it in its entirety. Again, those who often turn to social media for news about the outbreak are more likely to have seen all or part of the video (17%), which is likely connected to the fact that much of the video’s viral spread occurred on social media platforms.

While there is a partisan divide over the legitimacy of the theory in general, similar shares of both Republicans and Democrats say they have watched the video (11% and 10%, respectively).

Three Months In, Many Americans See Exaggeration, Conspiracy Theories and Partisanship in COVID-19 News 1. Americans rate CDC highly, Trump and his administration poorly on getting the facts right about COVID-19 2. Americans still follow COVID-19 news, though with less intensity; many say this news is becoming more political
3. Most Americans have heard of the conspiracy theory that the COVID-19 outbreak was planned, and about one-third of those aware of it say it might be true
Acknowledgments Methodology