Last week’s caucus-tallying muddle in Iowa shined a spotlight on the way U.S. presidents are elected and on the possibility that, in a divided nation, there could be controversies over vote tallies, results and the legitimacy of the outcome.

Many political issues are highly polarized across partisan lines, but Americans’ confidence in the public’s willingness to accept election results regardless of who wins – a fundamental underpinning of our electoral system – is only modestly tied to party identification. Instead, it appears to have a closer relationship to how intensely U.S. adults engage with political and election news, according to a new analysis of data from Pew Research Center’s Election News Pathways project. The more closely someone follows political news, the more confidence that person has that election results will be accepted. And those differences cross party boundaries.

Reliance on social media for political news also appears to be a factor in someone’s confidence in the acceptance of election results. Americans who get most of their political news on social media display less confidence in the public’s acceptance of election results, regardless of the winner, than those who mostly get this news in other ways such as cable TV, news websites or print newspapers.

Greater attention to political and election news aligns with greater confidence in the public’s acceptance of election results – regardless of party.

It is worth noting that there are modest partisan differences on this issue. Just over half of Democrats (56%) say they have a great deal or fair amount of confidence election results will be accepted, compared with 47% of Republicans. But the party difference is smaller than the difference among those who follow election news at different levels.

Americans’ confidence in the acceptance of election results also differs by the pathways they most commonly use for political and election news – specifically for those who rely most heavily on social media.

Adults who say the most common way they get political and election news is through social media express less confidence in the public to accept election results than those who get most of their election news via TV, print, radio or news websites and apps. 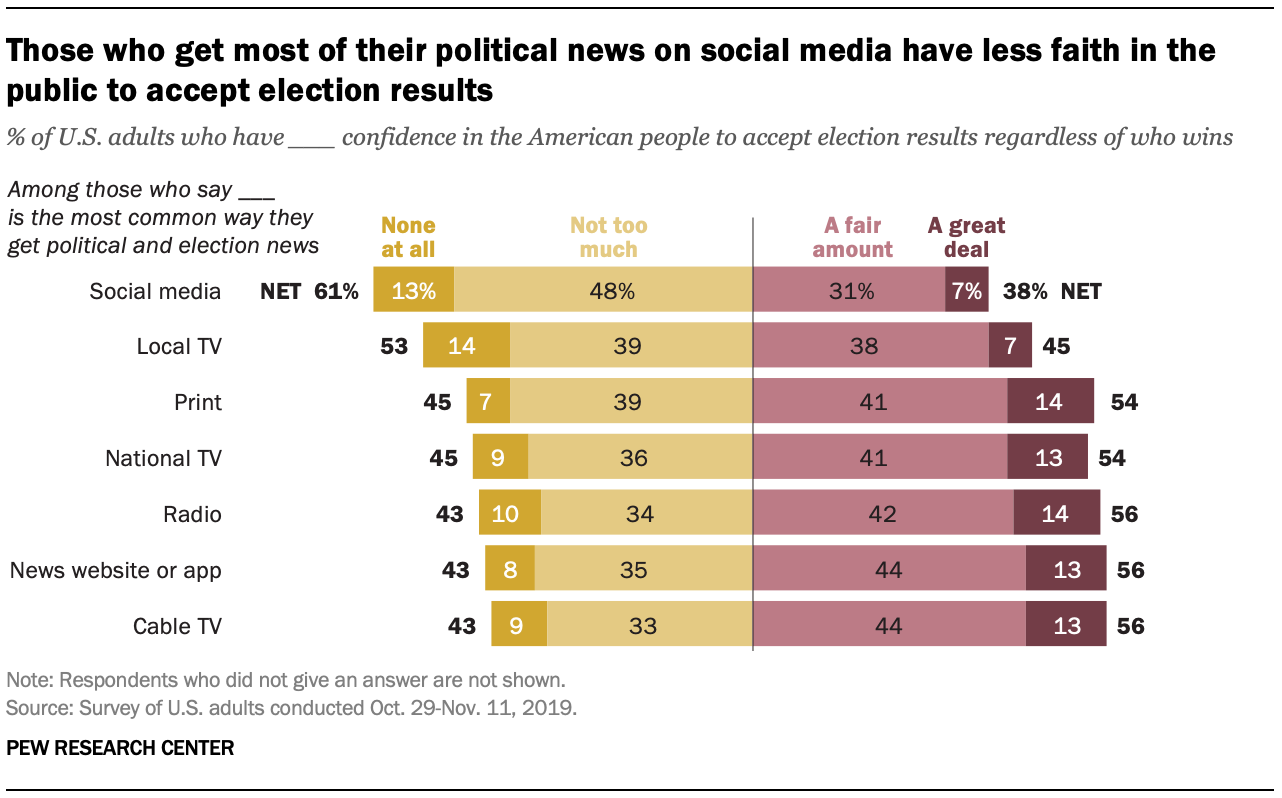 About four-in-ten U.S. adults who rely most on social media for political and election news (38%) say they have a great deal or fair amount of confidence in the public accepting election results.

Those who mostly use local TV for political news are second-lowest in their confidence, with 45% saying they have at least a fair amount. This rises to half or more among those who primarily get their political news from any of the other pathways asked about.