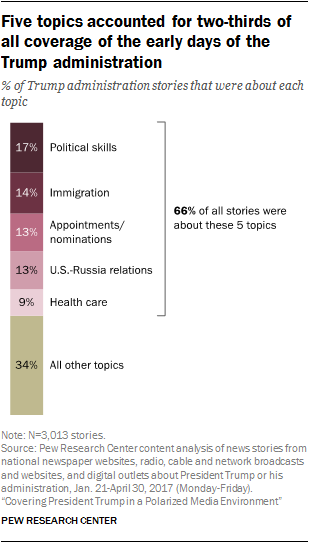 These topics reflected the major events that occurred during the first 100 days of the Trump administration.

Stories of Trump’s political skills spanned a wide range of issues and events, such as the delivery of his first speech to a joint session of Congress, his management of White House staff, and his promotion and handling of claims about wiretapping.

Immigration coverage looked at the president’s executive order limiting the entry of travelers from certain countries and the legal challenges to it, as well as stories on the border wall with Mexico, illegal immigration and so-called sanctuary cities.

Stories about nominations and appointments included Trump’s selection of Cabinet members, such as Sen. Jeff Sessions as attorney general and Lt. Gen. H.R. McMaster as national security adviser. They also included the nomination and confirmation of Judge Neil Gorsuch as a Supreme Court justice.

Allegations about Russia’s possible involvement in the 2016 election as well as the White House’s relationship with Moscow dominated stories on U.S.-Russia relations. Specific events included federal investigations into allegations of collusion and coordination, the related resignation of national security adviser Michael Flynn, and Sessions’ recusal from the Russia probe.

Coverage of health care included stories on efforts by Trump and other Republicans to move health care legislation through Congress.

Some differences emerged in coverage of each of these five topics. Immigration and health care, the two most policy-centric issues, were less likely to be framed around leadership than other issues. The actor or type of event that triggered a story (i.e., what spurred a news organization to produce the story in the first place) differed by topic as well. Finally, refutations of something Trump said occurred most frequently in stories about the president’s political skills.

In three of the five most common story topics, coverage focused overwhelmingly on the president’s leadership and character 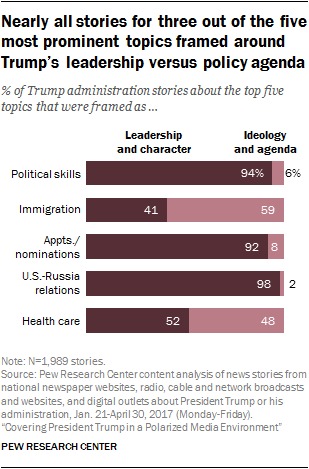 Among the five most prominent topics covered by the news media during the first 100 days of the Trump administration, immigration was the only one to focus more on the president’s policy agenda and ideology than his leadership and character: 59% versus 41% of stories.

Coverage of health care, the other domestic issue among these top five, was about split between the two frames.

About two-thirds or more of all stories produced about the five most common topics cited the president or someone from his administration. And for four of the five topics, the Trump administration was cited at a much higher rate than any other source type. The one exception was health care, for which stories were just as likely to cite a Republican congressional representative (66%) as they were Trump and his administration (64%). During that period, Republicans were trying to move health care reform legislation through Congress. Additionally, stories on health care were more likely than others to source an expert (22%). 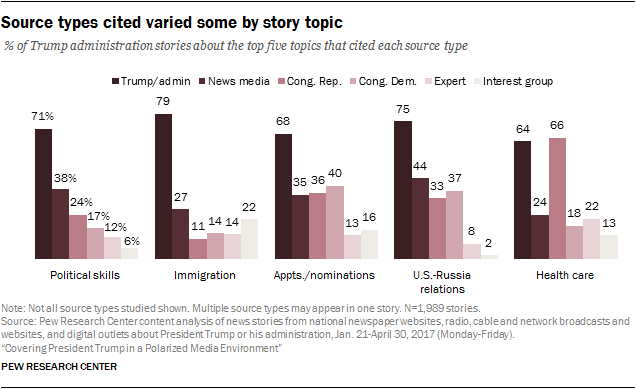 Positive assessments were rare across all five main storylines 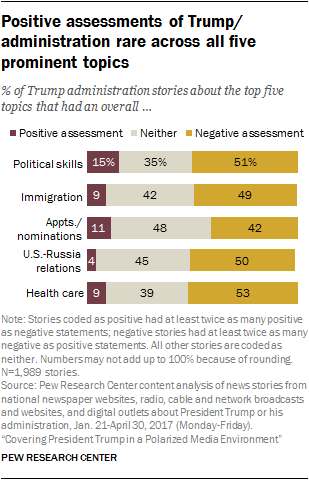 Negative assessments of Trump and his administration’s words or actions were considerably more common than positive assessments in all of the five most prominent topics. (For an explanation of how a story is categorized as having a positive, negative, or neither positive nor negative assessment, see the methodology.)

At least four-in-ten of all stories across the five most prominent topics were negative, rising to at least half for health care (53%), the president’s political skills (51%) and U.S-Russia relations (50%). The only topic where neutral stories even slightly outweighed negative was coverage related to presidential appointments and nominations (48% neutral compared with 42% negative).

Trump and the administration triggered a large portion of news coverage, though the influence level varied by topic 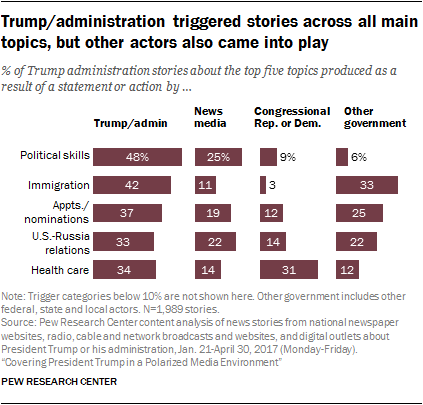 Overall, the statements and actions of the president and his administration were the largest driver of coverage of Trump’s first 100 days, but the amount of influence varied by topic.

About half (48%) of all stories written about the president’s political skills were initiated as a result of a statement or action by Trump or a member of his administration. For the other four most common topics, Trump and his administration were also frequent drivers of coverage but were not as dominant, ranging from 33% of U.S.-Russia relations coverage to 42% of immigration.

The news media, either through investigative reporting or a statement made by a member of a news organization, were also a significant driver of coverage, prompting a quarter of stories about political skills as well as about one-in-five stories on U.S.-Russia relations (22%) and the president’s appointments and nominations (19%). This was less common for stories on health care (14%) and immigration (11%).

Health care coverage was much more likely than other topics to be in response to an action or statement by a Republican or Democratic congressional representative (31% compared with 14% or less for the others), likely tied to Republicans presenting new health care legislation during this period.

A third of immigration coverage (33%) was triggered by other government action, such as a Supreme Court statement, a report by a Federal agency, or a congressional hearing, followed by stories on appointments and nominations (25%) and U.S.-Russia relations (22%). Only 6% of stories on the President’s political skills were in response to other government entities.

Two-in-ten stories about the political skills of the president carried a refutation by the reporter of something Trump or a member of his administration said. This is at least twice the rate of any of the other four main topics.

For example, Business Insider, in a review of President Trump’s first address to a joint session of Congress, refuted his interpretation of economic data:

“Saying he inherited many problems domestically and overseas, Trump began to outline what he believed needed to be addressed. First, were the 94 million people out of the labor force – a misleading statistic, considering it encompasses retirees, students, and stay-at-home parents.”

The two topic areas most likely to include a direct tweet from President Trump were the president’s political skills (23%) and immigration (21%). The topic area of appointments and nominations was least likely at 7%.

ABC News, for example, in an article on Trump’s response to a federal appeals court’s decision upholding a restraining order against his immigration executive order, included his tweet: “SEE YOU IN COURT, THE SECURITY OF OUR NATION IS AT STAKE!”

After Trump fired acting Attorney General Sally Yates for refusing to defend his executive order on immigration, CNN reported on his frustration with the delay in confirming Jeff Sessions, his choice for attorney general, including this tweet: “The Democrats are delaying my cabinet picks for purely political reasons. They have nothing going but to obstruct. Now have an Obama A.G.”

Next: 3. A comparison to early coverage of past administrations
← Prev Page
Page1Page2You are reading page3Page4Page5Page6Page7Page8Page9
Next Page →

Covering President Trump in a Polarized Media Environment 1. Coverage from news outlets with a right-leaning audience cited fewer source types, featured more positive assessments than coverage from other two groups
2. Five topics accounted for two-thirds of coverage in first 100 days
In three of the five most common story topics, coverage focused overwhelmingly on the president’s leadership and characterTrump and the administration were most common source type in four of five main topicsPositive assessments were rare across all five main storylinesTrump and the administration triggered a large portion of news coverage, though the influence level varied by topicRefutations of Trump or administration statements most likely to occur in stories about Trump’s political skillsStories on political skills and immigration were more likely than other topics to cite a Trump tweet
3. A comparison to early coverage of past administrations Acknowledgments Methodology Appendix A: A deeper look at the outlet with the most stories in each outlet group Appendix B: Coverage across news platforms Appendix C: Detailed tables