SEE AN INFOGRAPHIC OF FINDINGS

In America’s embattled newspaper industry, some business innovations are showing clear signs of success, according to a new report by the Pew Research Center. While many of these are occurring on the digital side, some papers are generating new print revenue-through circulation gains, niche products and even sales reorganization. 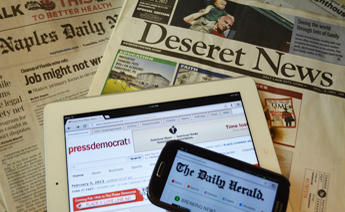 The report follows a year-long effort to identify newspaper successes in the search for new business models. This report analyzes four such dailies whose executives explained, in detail, the motivation and strategy behind their experiments and shared internal data about the results with the Pew Research Center’s Project for Excellence in Journalism.

One paper, contrary to a downward industry trend, has enjoyed an increase in overall revenue in both 2011 and 2012. Another has seen digital revenues average nearly 50% annual growth since 2010. A third has developed a fast-growing revenue stream outside of the core business while the fourth has seen the growth of digital revenue largely offset print losses.

All these organizations embarked on business-side experiments in the past two or three years after suffering major economic losses in the second half of the last decade. These success stories share some common characteristics such as risk-taking leadership, a commitment to remaking the internal culture and a push to improve the editorial product. Yet, they all introduced different innovations, tailored to the particulars of that market. What worked in a wired California wine community might be a poor choice in a Florida resort destination. Customizing the business model for the community, these newspaper executives say, is a key component of success.

These case studies are the outgrowth of “The Search for a New Business Model” released by Pew Research Center in March 2012. Based on data provided by nearly 40 newspapers and interviews with executives at 13 newspaper companies, that study found that in general, the effort to replace losses in print ad revenue with new digital revenue was taking longer and proving more difficult than executives wanted. In the sample, for every $1 newspapers were gaining in digital ad revenue, they were losing $7 in print advertising. (By the end of 2012, the numbers were considerably grimmer for the sector as a whole-$16 in print losses for every digital dollar gained.)

But there were a few signs of hope in that study. A half dozen outliers either managed to offset print losses with digital gains or came very close to doing so. Pew Research tracked those outliers and found, as a reminder of the fragility of the business, that in the course of several months, two had suffered significant revenue declines and three others were part of a company undergoing a major organizational restructuring that made it difficult to draw conclusions about their economic health. At that point, Pew Research sought to identify other papers that had valuable revenue success stories to tell.

One of the four papers included in this report, the Deseret News, had participated in the earlier survey and reported good results. The Santa Rosa Press Democrat also provided data, but was not one of the successful outliers at that time. The other papers were identified after multiple conversations with news executives and then preliminary interviews with the publishers at each paper. (The Naples Daily News came to the attention of the Pew Research Center when the E.W. Scripps Company issued a release trumpeting its revenue increase of about 10% in the first quarter of 2012.)

These papers are not alone in experimenting with new revenue streams-many dailies are working on business innovation in this difficult economic era out of necessity. But these four were selected for the degree to which their innovations had developed into essential components of their organization and culture, because their innovations showed tangible and positive revenue results and because their stories offered lessons worth sharing-ranging from leadership to market customization. Still, these innovations are works in progress and these papers remain vulnerable to the economic disruption that has wreaked havoc on the industry in the past half dozen years and that industry-wide, continues to worsen.

To produce these reports, Pew Research visited each of the four newspapers, gathered data and conducted lengthy on-the-record interviews with executives as well as other observers and analysts. Each case study details the nature of the newspaper’s market, how the innovations work, the challenges faced, the empirical evidence of success and the lessons learned. Some of the lessons include:

While these lessons vary, there are some basic shared characteristics that undergird the decisions taken at these papers.

One is strong, aggressive leadership or what media analyst Gordon Borrell describes as “clarity of vision.” The styles of leadership at these papers range from Deseret CEO Clark Gilbert’s academically oriented theories about business disruption to Columbia Daily Herald publisher Mark Palmer’s determined pursuit of every dollar lost to the economic downturn. But the leaders at these papers are risk takers who concluded that the biggest risk was not rethinking their business models.

Another is the ability and perseverance to get the buy-in necessary to change the internal cultures in an industry where that frequently proves difficult. Indeed, 10 of the 13 newspaper executives interviewed for Pew Research’s March 2012 report identified internal tensions between the legacy and digital cultures as the biggest challenge to business success. Some of the executives profiled admitted that implementing cultural change was among their most daunting task-with plenty of early resistance, whether it was getting former competitors to work together in Salt Lake City or convincing account executives to embrace more autonomy in Naples.

A third is a commitment to improving the quality of the editorial product, even with reduced resources. In the case of the Deseret News, the response was not only to shift the focus of coverage from general interest to faith and family, but to dig deeper into those topics with more ambitious, enterprise reporting. At the small Columbia Daily Herald, it meant hiring an investigative reporter from Detroit. Several publishers spoke openly of the need to improve the news product and these organizations view quality as essential to “keeping the franchise” and building revenue.

The case studies also help illustrate the accelerating pace of change in the newspaper industry in the last few years. When Pew Research asked newspaper executives three years ago about trying to get news consumers to pay for digital content, 58% said their organizations had not begun a pay wall and another 22% said they had not yet considered such an option or had rejected it. Of the four papers included in the case studies, one instituted a paid digital subscription plan in 2012 and the other three are likely to do so in the near future.

Even so, one common theme that emerges from the publishers featured in this report is that there is still too much innate caution and ambivalence in an industry that must take significant risks to build a sustainable revenue model.

“We need to be fearless, and we need to operate in that mode,” says Naples Daily News publisher Dave Neill. “And we don’t.”

Next: Santa Rosa Press Democrat - The Media Lab
← Prev Page
You are reading page1Page2Page3Page4Page5Page6Page7Page8
Next Page →