For the week of June 11-15, the number one story on blogs was about Apple and updates to its products, according to the New Media Index from the Pew Research Center’s Project for Excellence in Journalism.

Unlike many topics, where bloggers largely use social media to opine, this story was driven by tech bloggers who reported on the event, even liveblogging it to their readers with up-to-the-minute details straight from the conference floor. The annual conference is always popular among Apple fans and is widely reported through blogs as well as traditional media.

The June 11 WWDC event started with a keynote address from Tim Cook, Apple’s CEO. The company then announced a next generation MacBook Pro with an upgraded Retina display, new operating systems and processor upgrades, among other developments. While social media speculation about some of these improvements pre-dated the announcement, rumors about the promise of a new Apple TV proved unfounded.

Apple also announced upgrades to Siri, the popular “virtual personal assistant,” including steering wheel integration for several car companies, connectivity with other applications like Yelp and ability to use it on the new iPad.

At least one tech blogger was skeptical about Siri’s in-car integration.

“I could not believe automakers would actually put dedicated buttons just for Siri in their cars,” wrote Wayne Cunningham for CNET, “You see, there is a little conversation going on among automakers, the Department of Transportation, and the general public about distracted driving. If an automaker were to open up all the capabilities of an iPhone, social networking, texting, what have you, through Siri, those same automakers would likely be included in lawsuits brought by victims in distracted driving accidents.”

Others were pleased about the changes to Siri.

“One of the biggest new additions is that Siri can now launch apps when asked,” wrote Chris Velazco for Tech Crunch. “That lack of that functionality from day one seemed like a serious shortcoming especially considering how Apple was trying to position her (or him, depending on your locale) as a smart new way of interacting with the iPhone.”

Apple also announced that it would be releasing its own Maps app, a direct competitor to Google Maps, which has dominated that market for years.

“Google, of course, is a gigantic company that will be able to withstand this blow from Apple,” wrote Chris Barth for Forbes, “More threatened are companies like Garmin and TomTom, which have made their name producing high-quality GPS navigation and communications systems for cars.”

Another change to the new operating system involved including gay and lesbian couple icons into the emoji menu. Emojis are popular emoticons or pictures, smiley faces, figures or other little images that can be used when texting. One tech blogger was pleased with the addition, but suggested a few more.

“Since utilizing emoji in my own texts as a guilty pleasure I indulge myself in daily, I’ve included a few emoticons below that Apple missed as part of iOS6,” wrote Ray Basile for iPhone Savior, “The emo emoji kid, hipster and “doh! guy” icons are essential, but more importantly Apple should have added an ample variety of ninjas into the mix. The Pacman Ninja and Mutant Ninja Turtles emoticons are must-haves in my book.”*

“Unlike Apple’s hardware and software products, most of which have been tremendously successful in the last couple of years, the company’s social network has been poorly received from the very beginning,” wrote Stan Schroeder for Mashable, “Besides the fact it was available only to a limited subset of iTunes users, it also had issues with spam and a serious lack of artist profiles…It makes sense that Apple is no longer interested in maintaining Ping.”

“Ping [is] an embarrassment for a company that is the unquestioned leader in selling smartphones, tablets, and songs,” wrote Ryan Tate for Wired, “Shutting down Ping would put the failure behind Apple, but would also be a public acknowledgement that Apple is out of its element when it comes to bringing people together in social networks…That could change. If it learns the right lessons from the Ping defeat, Apple could yet go on to launch useful, innovative social products.”

Other Top News Stories in Blogs

While Apple dominated the conversation, the No. 2 subject on blogs last week was a story from Danny Goodwin 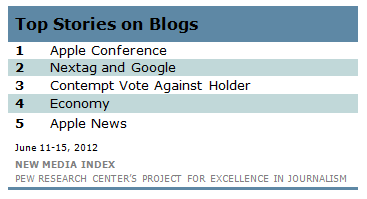 of Search Engine Watch critical of Nextag’s “false sense of Google entitlement” after Jeffrey Katz, the CEO of the comparison shopping site Nextag wrote an op-ed in The Wall Street Journal criticizing Google for using its monopolistic power to crush competition.

In Goodwin’s lengthy piece, the author compares results from different search engines. “Not having Google as the entire foundation of your online business marketing strategy lessens the risk that your site will sink into quicksand next time Google lets out a black and white animal from its zoo,” wrote Goodwin, “Always remember: Google traffic is a bonus, not a guarantee.”

At No. 3 was a story about the House Oversight Committee’s scheduled vote on whether to hold Attorney General Eric Holder in contempt of Congress for not turning over documents subpoenaed in October 2011 dealing with the Fast and Furious program that resulted in U.S. guns ending up in the hands of Mexican drug cartels. On June 20, the Committee voted to hold him in contempt, making him the first Obama administration official to be held in contempt by a congressional panel.

The fourth-biggest subject was research about the economy. Jared Bernstein, the former Chief Economist and Economic Adviser to Vice President Joe Biden and current senior fellow at the Center on Budget and Policy Priorities, broke down the Federal Reserve’s Survey of Consumer Finances on his blog and Democracy Corps, a liberal-leaning research firm, provided qualitative research on the economic narrative.

The No. 5 topic was other news about Apple, unrelated to the WWDC conference, including a discussion of back-to-school deals offered by Apple.

Twitter was once again dominated by pop stars, with perennial Twitter fave Justin Bieber taking top billing. The DJ/producer Diplo discussed his collaboration with the Biebs, saying, “The craziest thing about Justin Bieber is that the kid is really good at everything. He’s really good at ping pong, the kid can rap, he has awesome hair, he’s super cool and super nice.” 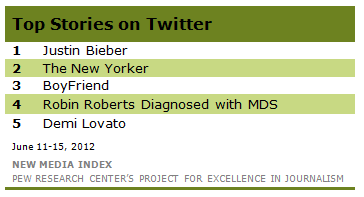 In addition, a video of fans camping out for Bieber’s Today Show concert along with a ” target=”_blank” rel=”noopener noreferrer”>behind-the-scenes video from the recording of Beiber’s song “As Long As You Love Me,” pushed the teen singer to the top.

The second biggest topic was a Mashable article about The New Yorker’s embrace of the web. The magazine has made significant investments online: expanding its web team to 12 full-time employees including a former senior editor at Wired, launching its first issue for the iPad less than six months after the device went on sale in the U.S. and becoming available on the Kindle Fire the day that tablet launched.

In third place was a ” target=”_blank” rel=”noopener noreferrer”>music video teaser from the Korean pop band BoyFriend. The six-member group has released three Korean single albums since its formation in 2011.

At No. 4 was news that Good Morning America anchor Robin Roberts was diagnosed with a rare disease of the blood and bone marrow called myelodysplastic syndrome. The morning news show mainstay says she beat breast cancer only five years earlier, and is optimistic about her prognosis. “My doctors tell me I’m going to beat this,” Roberts said, “And I know it’s true.”

And Demi Levato, the teenage singer-songwriter and X Factor judge, came in fifth place when racy images from her past surfaced.

For the second week in a row, the hottest social media meme, a video mash-up of snippets from speeches by President Obama set to the hit song “Call Me Maybe,” drew the most attention on YouTube.

According to the New Media Index, the video generated almost 8 million views on YouTube within five days. Since the report, the number of views has increased to almost 14 million views.

The No. 2 video, captured by amateur videographer Rob van der Horst, showed two tourists caught by surprise at the Rotterdam Zoo, in the Netherlands, when polar bear Vicks accidently cracked the glass wall of his swimming enclosure while playing with a large rock. The polar bear was named after the cold and flu medicine company, which adopted him when he was born.

Obama, Apple and an Oracular Octopus Lead the Social Media

The UK Elections Consume the Blogosphere