A column by an Egyptian-American journalist that was posted on the website of Foreign Policy magazine sparked a complex and passionate debate online about the treatment of women in the Arab world last week. 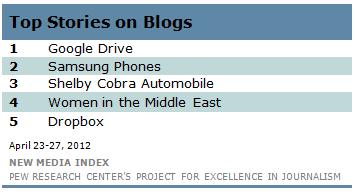 Written more than a year after the onset of the “Arab Spring” and headlined “Why Do They Hate Us?” the piece by Mona Eltahawy argues that women in the Arab world suffer from systematic injustices that are unlikely to change despite the revolutions and upheaval occurring in the region.

For the week of April 23-27, the discussion surrounding the Foreign Policy piece was the fourth largest subject on blogs, according to the New Media Index from the Pew Research Center’s Project for Excellence in Journalism.

The commentary on blogs-including from a number of Arab women-was for the most part highly critical of Eltahawy’s views, as respondents suggested that her view played into gender stereotypes of the region. The piece also generated interest on Twitter and Facebook, though it did not rank among the top stories. On those social media platforms, the tenor was mixed, but generally more supportive then critical.

Eltahawy’s column was published online on April 23 as part of a Foreign Policy special report called “The Sex Issue.” Set against the backdrop of the “Arab Spring” occurring throughout the Middle East, the piece described problems facing women in Arab countries. Eltahawy cited a wave of child marriages in Yemen, declared that sexual harassment is “endemic” in countries such as Morocco and Egypt, and recalled how 15 Saudi Arabian girls died in 2002 in a fire because they were not allowed to leave a building without headscarves and cloaks.

“Name me an Arab country, and I’ll recite a litany of abuses fueled by a toxic mix of culture and religion that few seem willing or able to disentangle lest they blaspheme or offend,” summarized Eltahawy.

The column ended with a call to action.

“Call out the hate for what it is. Resist cultural relativism and know that even in countries undergoing revolutions and uprisings, women will remain the cheapest bargaining chips…Our political revolutions will not succeed unless they are accompanied by revolutions of thought–social, sexual, and cultural revolutions that topple the Mubaraks in our minds as well as our bedrooms,” Eltahawy declared.

The piece generated such an intense response that Foreign Policy created a page where six “smart observers” weighed in. There, journalists, professors and researchers shared their own experiences regarding how women are treated in the Arab world.

A number of people felt compelled to share the column with their friends using social media sites such as Twitter and Facebook. For most of those users, the comments were supportive.

“An excellent piece on women’s liberation in the Arab world by a very thoughtful Egyptian-American lady,” posted Bill Rhea on Facebook.

“an article that should be read by all women and men,” added Leila El Sidaoui.*

Not all, however, agreed.

“As a Muslim and an Arab, Mona Eltahawy does not represent me,” tweeted @Y_salameh.

On blogs and commentary-based websites, the conversation expanded as well-although it went in a largely different direction.

Some applauded Eltahawy’s courage in arguing that the Arab Spring, being lauded by some as a democratizing change in the region, will not automatically improve conditions for women.

“Experience shows that switching governments does not put an end to discrimination against women in the Middle East, which transcends political systems,” described Sohrab Ahmari at Tablet. “To anyone familiar with the daily humiliations meted out to women from the Maghreb to the Gulf-including the entire patchwork of laws and cultural mores limiting women’s travel, dress, and sexuality-Eltahawy’s claim is self-evident.”

Overall, however, the blogosphere commentary was mostly negative. While almost all respondents agreed with her ultimate goal of equality for women, there were a number of vocal critics. Their primary complaint was that Eltahawy’s narrative was overly simplistic and played into negative stereotypes about Arab women.

“The entire article is framed in a way that portrays Arab women as helpless, and in need of rescue and protection,” wrote Samia Errazzouki at Al Monitor. “The issue is framing and presenting women in the region as a monolith and pitting their struggles against the backdrop of an argument which points to ‘hate.'”

“But for many Arab women…this column is offensive and is nothing but a combination of old cultural practices and undemocratic government actions that are described in a way to represent women as the Oriental Other, weak, helpless and submissive, oppressed by Islam and the Muslim male, this ugly, barbaric monster,” condemned Tahrir Spirit. “As a Muslim Arab woman, I therefore by no means see myself being represented fairly in Eltahawy’s column.”

“Many Arab women are perturbed that her article…has received so much attention while millions of women leaders throughout the Middle East are reduced to a footnote by Western media,” wrote Sahar Aziz at The Huffington Post. “By failing to cover the courageous efforts of the millions of women leaders who incrementally chip away at patriarchy, as opposed to bulldozing it with a sledge hammer, Western media exacerbates the underlying problem – the objectification and infantilization of Arab and Muslim women.”

“Being a liberal Arab-American explains a lot of the rhetoric Eltahawy uses in the Foreign Policy piece,” suggested Mona Kareem at Al Monitor. “The photos that accompany the article also rely on stereotypes. The images of a woman painted in black, except for her eyes…are exactly what Eltahawy professes to be against; they are stereotypical depictions of Arab women, and this makes them dangerous.”

“Though you may have usurped our voices without our consent and begun marketing yourself as having the authority to speak on behalf of all Muslim and Arab women, we contend that we could not have found a better self-appointed media darling,” read a sarcastic letter on Colonial Feminism addressed to Eltahawy. “Mona, may you continue in your fight for media slots…despite a slew of Arab women from all walks of life refuting your oversimplification of our plight.”

Among all of the critiques, however, there was a sense that Eltahawy accomplished at least one goal.

“Whether they agree or disagree, people are talking,” noted Nadia S. Mohammed at altmuslim. “Sometimes, a sensationalist jump start is what we need to get us moving, as Fatima Dadabhoy cheekily states, ‘Maybe ‘hate’ is a strong word but I think the title ‘Why Don’t They Like Us Enough or Trust Us Enough or Value Us Enough to Grant Us Our Rights’ would just get too wordy.'”

The rest of the popular topics on blogs involved a wide variety of high-tech subjects-from the internet cloud to smartphones to classic cars.

Two of the biggest topics involved the race for market share in the world of online cloud storage. The No. 1 topic was the April 24 unveiling of Google Drive, Google’s foray into the fast-growing tech world. With this service, users can get up to 5GB of storage for free that is integrated with other popular Google products such as Gmail and Google Docs. This marked the second week in a row that the service was the most discussed topic on blogs.

The fifth topic was Dropbox, a network storage system that has been around since 2008. On April 23, Dropbox unveiled a new feature that allows users to send links of their stored files to others. Then, on April 27, Dropbox announced it was updating its service to make it easier to upload photos from any camera, smartphone, tablet or desktop computer.

The combination of these subjects demonstrate the growing interest and competition surrounding the online storage market from services like Google Drive, Dropbox, and MicroSoft’s SkyDrive.

Stories about Samsung Phones, including news that Google started selling Galaxy Nexus phones from a new Devices section in the Google Play web store, was the No. 2 subject.

A photo gallery celebrating the 50-year anniversary of the Shelby Cobra automobile was the number three topic. The car, which debuted at the New York Auto Show in 1962, has become a coveted object for collectors and has been used in numerous road racing competitions through the years. 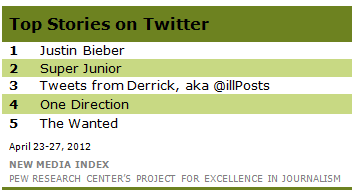 On Twitter, four of the topmost subjects involved male pop singers and groups.

Tweets and a “>radio interview with teen idol Justin Bieber made up the top subject last week, followed by tweets from the boy band Super Junior.

Tweets from another boy band, One Direction represented the fourth-biggest topic, followed by links to a new album and “>video by the band The Wanted.

The only non-musical topic among the leading Twitter subjects involved several tweets from Twitter user Derrick, aka @illPosts, featuring his statements about love and relationships, which were the No. 3 topic. This is the second time that tweets from Derrick, who has nearly 350,000 followers, were among the most popular topics on Twitter in the past month.

The most watched news video on YouTube was a news story about a Japanese man with an uncommon hobby.

Kenichi Ito, a 29-year-old man living in Tokyo, earned a Guinness World Record for the fastest time running 100 meters on all fours. Long a fan of simians, Ito has spent more than eight years developing the running technique that got him into the record books based on the movements of the African Patas monkey.

The story includes footage of Ito practicing on city streets, and describes how he developed his craft through use of the internet and frequent trips to the zoo.