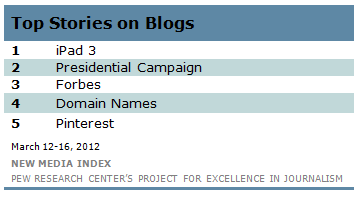 In the mainstream press, Mitt Romney enjoyed his most positive coverage of the year as the delegate math made it more likely he will become the party’s nominee. According to an analysis by the Pew Research Center’s Project for Excellence in Journalism, 61% of Romney’s news coverage was positive compared with only 17% that was negative.

But online, the conversation about Romney was much different and quite negative. There, he faced intense criticism for statements and positions on issues ranging from Planned Parenthood to Rush Limbaugh.

For the week of March 12-16, the presidential campaign was the second-most discussed subject on blogs, according to PEJ’s New Media Index, with almost all of the focus on Romney. For bloggers, the discussion was not about the delegate count or the primaries in Alabama and Mississippi. Instead, they roundly criticized several of Romney’s positions and statements.

Most of the condemnation came in response to Romney’s March 13 statement that he would “get rid of” Planned Parenthood funding. Others disparaged his response to Rush Limbaugh’s crudely-worded criticism of Georgetown Law student Sandra Fluke who had advocated that health insurance plans have mandates for covering contraceptives. And some focused on the discovery of a 2009 op-ed written by Romney in USA Today that touted his health care plan enacted in Massachusetts as a model for what could be done nationwide.

Most of the criticism came from liberal bloggers, but some conservatives condemned Romney as well for not being conservative enough.

Online, the negative tone about Romney is not new. PEJ’s analysis of Twitter, for example, has shown that Romney has consistently received far more negative comments than positive. So far in 2012, more than half-54%-of the Twitter conversation about him has been negative compared with only 22% positive. Earlier PEJ research showed that in late 2011, the discussion on blogs about Romney was mixed, but trending more negative over time.

Last week, the difference between the Romney narrative in the mainstream media and in the blogosphere further emphasizes the different agendas and functions of the two platforms.

The quote that triggered the most response among bloggers was from a March 13 interview Romney conducted with a Missouri television station where he said “Planned Parenthood, we’re going to get rid of that.” His campaign later clarified that he meant he would end federal contributions to the program.

Less than two months ago, Planned Parenthood had been part of another controversy when the Susan G. Komen for the Cure foundation announced it would no longer fund the health organization. That decision spurred its own wave of online reactions which were heavily critical of the Komen decision and backed Planned Parenthood. In response to the widespread protests, Komen reversed its decision and the senior vice president of public policy, Karen Handel, resigned.

In both instances, the reaction on social media strongly advocated for Planned Parenthood, suggesting that the organization has significant support online.

“That’s right, he said he’d get rid of Planned Parenthood-the more than 90-year-old organization that one in five American women has depended on for health care, and that for many women is their only option for cancer screenings, clinical breast exams, and critical preventive care,” replied the Duval Democrats. “Apparently, we can’t afford it.”

“Romney, in his most recent attempt to woo conservative Republican voters and the ultra- conservative Tea Party faction, has decided to show his growing distaste for women and women’s issues,” added Legal Speaks.

“If I was Mitt’s campaign manager, I’d be figuring out ways to keep him away from microphones,” recommended Carl at Simply Left Behind. “Let the prepared commercials do the talking, because right now, they’re spending money to win back lost ground.”

The controversy over Rush Limbaugh’s remarks centered on a similar subject-women’s health. After the conservative radio host drew widespread condemnation and advertiser boycotts for calling Sandra Fluke a “slut” and “prostitute,” Romney told reporters in response that “it’s not the language I would have used.” Many bloggers criticized the GOP presidential hopeful for language they said was too tepid.

“This guy has the worst political tin ear I’ve ever come across in presidential politics,” declared digby at Hullabaloo. “Seriously, what in the hell is he doing running for office?”

“How can you expect Romney to stand up to Putin or Ahmadi-Nejad if he can’t even stand up to an obese bully with a microphone?” asked Mark Kleiman at Same Facts.*

“Romney will win the GOP nomination, but at what cost?” wondered Paul Solomon. “His long list of gaffes will come back to haunt him. Having friends who own NASCAR teams is small consolation. But his $240 million won’t hurt. Maybe he can buy his wife a few more Cadillacs.”

A BuzzFeed report about a 2009 column by Romney touting his health care plan as a model for Obama’s nationwide reform spurred further outrage, mostly from conservatives who were already skeptical about Romney’s credentials as a true conservative.

“But the flip-flopper tag sticks to Mitt Romney for the simple reason that he’s got a lot of explaining to do,” wrote MulrooneyPatteson490 at Gee Thanks, President Obama. “And contrary to his claim that he never pushed an individual mandate to purchase insurance at the national level, Romney did as recently as 2009 in a USA Today op-ed. It’s tough to trust a guy who is b.s.-ing about his signature accomplishment.”

“In any case, what we can conclude is that, insofar as he regards Romneycare as his signature achievement, Mitt Romney will be half-hearted in his quest for Obamacare’s repeal,” warned Jay Wiley at Austin Conservative. “When it comes to practical politics, efficiency is often for Mitt Romney the end-all and be-all. The real problem is this. Mitt Romney is a well-trained technician and not an educated man.”

Apple’s newest creation and three digital media stories led the rest of the news in the blogosphere last week.

With the highly anticipated release of the Apple iPad 3 last Friday, the device was the most discussed subject. Fans linked to details such as the price and the screen resolution of the new tablet, along with a positive review at Slash Gear. This is the third time in the past month that the iPad has been among the most popular subjects in the blogosphere.

Forbes magazine was the No. 3 subject as bloggers highlighted an article by Forbes reporter Lewis DVorkin about how the publication has changed in adapting its material for digital audiences. Forbes has focused more on listening and engaging with its consumers, which has resulted in record audiences of 30 million online users.

“You know what’s changed for me at FORBES?” reporter Deborah Jacobs is quoted as saying. “I now write for my audience, not my editor.”

An advice column on Mashable about how to best pick a domain name for a business website was the fourth-most linked-to subject last week.

And the rapidly growing social media site, Pinterest, was the No. 5 topic. Bloggers linked to a New York Post article about how the photo-sharing site that is used primarily by women is now the fifth-largest social network, and a Business Insider story about legal concerns regarding photographs posted on Pinterest without permission from the owner.

On Twitter, the most linked-to subjects showed how the social media platform can generate its own memes. 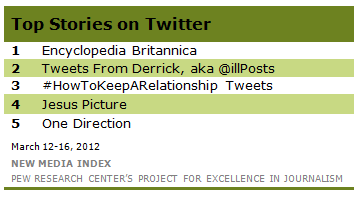 The No. 1 subject involved the announcement that, after 244 years, the Encyclopedia Britannica would no longer publish a printed edition, and will focus entirely on online products. Some Twitter users blamed the popularity of Wikipedia for the demise of the printed books, while most shared their surprise that a traditional staple in many households would no longer exist.

The next three subjects all involved links on Twitter to specific tweets.

The second-largest subject involved a collection of tweets from Derrick, aka @illPosts, regarding his hopeful views on relationships. According to Twee.co, tweets from Derrick have been the most popular on Twitter five times in the last two weeks. Many of his nearly 300,000 followers pass along his sometimes inspirational messages.

A picture with a list of advice for how to keep a relationship was the No. 3 subject that included suggestions such as “Forget about ‘pride'” and “Don’t be the perfect one. Be the right one.”

An image of Jesus on the cross was retweeted enough times to make it the fourth-largest topic.

Tweets from the British-Irish boy band One Direction were the fifth subject.

March 11 marked the first anniversary of the massive magnitude 9.0 earthquake and tsunami that ravaged the northeastern coast of Japan, killing over 19,000 people and triggering the world’s worst nuclear crisis in a quarter-century. Last week, the tragedy was back again among the top news videos on YouTube after being a featured subject for six consecutive weeks last March.

The No. 1 video showed dramatic amateur footage of the tsunami waves overtaking the streets of a town in Japan. Cars can be seen being swept away and surrounding structures swallowed by walls of raging water.

The Final Days of the Media Campaign 2012