The apology by the Susan G. Komen for the Cure foundation, which culminated Tuesday in the resignation of a top executive, did little to change the highly critical reaction in social media, according to a new study by the Pew Research Center’s Project for Excellence in Journalism.

The controversy that engulfed Komen after it announced it would no longer make grants to Planned Parenthood was as much a story about social media as politics.

The news, which broke January 31, triggered a massive outpouring of protest on Twitter and Facebook. Indeed when front-page stories appeared in the New York Times and Washington Post on February 3, they focused on the intensity of the social media response as much as anything. The Times cited a “roiling anger on the Internet” that highlighted “the power of social media to harness protests.”

But a detailed analysis of the conversation on Twitter finds that the group’s decision later on February 3 to reverse its new policy and restore funding to Planned Parenthood, did little to change the mix of the conversation on Twitter. Instead it only reduced the volume, according to PEJ’s analysis using technology from the firm Crimson Hexagon, which analyzes every public Tweet.

In the three days that followed the January 31 decision, PEJ found that almost two-thirds of the statements on Twitter—64%—were negative toward Komen and its decision, while 19% were neutral and just 17% were positive.

Of the criticism of Komen, the biggest share—20%—was lauding Planned Parenthood or calling for donations to the organization. Another 16% was more directly critical of Komen or called on it to reverse its decision. Another 12% called the defunding move political.

Of the conversation that praised Komen’s initial move, most of that (11% of all Twitter statements during the period) took the form of attacks on Planned Parenthood. Only 4% of the statements were actually praising Komen.

After the story became page one news, thanks largely to the Twitter reaction, the conversation on Twitter exploded—almost tripling from the scale it had seen the three days before. But the basic tone of the conversation remained largely unchanged—with 57% still negative about Komen, 23% neutral and 21% supportive of the breast cancer organization or critical of Planned Parenthood. 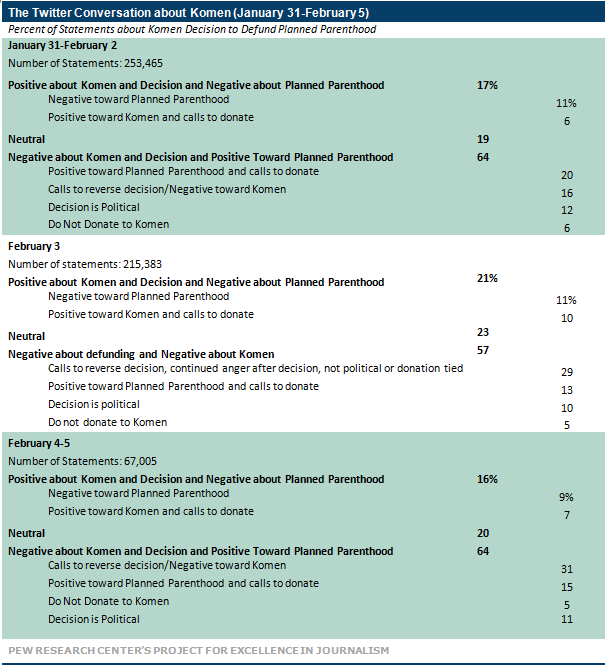 And after Komen changed its mind, the Twitter reaction was unchanged.

In the two days immediately following the reversal—February 4 and 5—64% of the statements about the group remained negative, while just 16% was positive and 20% neutral.

The largest percentage of criticism, (42% of all statements studied) continued to register anger about the original decision to defund Planned Parenthood or voice skepticism about Komen’s reversal.

What was different on February 4 and 5 was that the volume of statements about the controversy had dropped off—by 85% from February 3, and by 60% from the days immediately after they made the original decision.

That continuing criticism, though diminished, may in part help explain the departure February 7 of Karen Handel, a former Republican candidate who ran for governor of Georgia on a staunch pro-life platform.