Photographs and footage of police pepper-spraying students in California were widely shared on the internet last week, elevating the Occupy Wall Street movement to top billing on both blogs and YouTube.

The first Occupy story to make the Index came the week of September 26-30. The video of a protester in New York getting pepper-sprayed was a top story on both Twitter and YouTube.

From there, the Occupy protests rose to the top in at least one new media sector almost every week, with users sometimes voicing disgust at how police were acting, talking about the goals of the movement, or complaining about how the press was covering the protests.

Some have voiced disagreement with the Occupy movement, but they have continued to be just a small minority of the commentators overall.

For the week of November 21-25, the online discussion of the Occupy protests focused on the same subject that ignited online conversation back in September: Pepper-spraying seemingly non-threatening protesters, according to the New Media Index from the Pew Research Center’s Project for Excellence in Journalism.

There was an overwhelming response on blogs to footage of a police officer calmly pepper-spraying a group of students at the University of California, Davis, who were sitting on the ground.

“I was stunned and appalled by the UC Davis Police spraying protestors, but struck by how many brave, curious people recorded the events,” wrote Andy Baio at Waxy.

“…it’s almost like he’d never heard of the internet — like he’d been magically transported through time from the 60s or 70s or something!” wrote RoboPanda at UpRoxx.

There were some, though, who were not as sympathetic to the protesters.

“Two of the oh-so-tragic ‘victims’ of the now legendary UC Davis Pepper Spray Massacre foolishly gave an interview to KTVU, appearing perfectly healthy while smiling and almost giggling as they describe the unbearable agony of getting pepper sprayed,” complained Zombie at PJ Tatler.

“But the way the left is acting about this, you’d thing the kids were each shot in the foot or something,” wrote The Right Scoop.*

The video of the event that captured the No. 1 spot on YouTube was of UC Davis’ Chancellor Linda Katehi walking back to her car while the student protesters silently watch her pass. After the pepper-spraying incident, Katehi fought calls for resignation from students and faculty as well as condemnations from state lawmakers for the perceived police brutality.

Katehi later said that campus police officers defied her orders when they used pepper spray on the peaceful student protesters, and she apologized for the use of pepper spray.

A handful of other Occupy-related stories sparked commentary from bloggers as well. One was an offer, reportedly later rescinded, from the city of Los Angeles for office space and a farm at reduced rent.

Another was a clip of Fox News anchor Chris Wallace interrupting commentator Juan Williams when he defended the Occupy movement on Fox News’ Sunday panel and stated that most Americans identify with the problems of economic inequality. Much of the response came from liberal bloggers criticizing Wallace’s interruption.

“While it made for great TV, it also made us worry for Juan,” wrote Betsy Rothstein at Fishbowl DC, “We like your spunk. But interrupt Hall Monitor at your own peril.”

“Juan Williams apparently forgot what network he was working for if he thinks ‘fairness’ is something we’re going to get from Chris Wallace,” wrote Heather at Crooks and Liars.

Conservative author and former Bush speechwriter David Frum wrote an article for New York magazine in which he questioned whether the Republican Party has lost its touch with reality. Discussion of the article ranked fifth on blogs for the week, with liberal bloggers widely embracing the points raised by Frum.

“I appreciate Frum’s writing because he criticizes the GOP, not with ridicule or disdain, but with deep concern – concern, because he identifies as a Republican, and he knows that there are many good people in the Republican party who recognize that it has lost its way,” wrote E 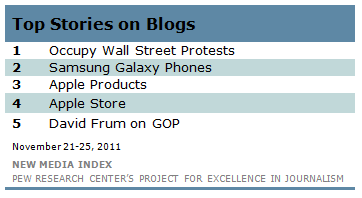 “Sage words from a conservative who can still see the bigger picture, and not only the GOP’s alternative reality,” said Lefty Coaster at Daily Kos.

Others who did not identify themselves specifically as liberal also found the piece valuable.

“One hopes that, by bravely speaking out on these issues, David Frum will galvanize what might be called the Great Silent Majority of Republicans to take back their party. Because the sooner America returns to having two reasonable alternatives, the better,” wrote Henry Blodget at Business Insider.

“Well worth your time to read the entire piece,” wrote Christian at Homebrewed Theology.

“An extremely well written essay by David Frum about how the GOP has gone completely off the rails,” said Irenicum at Little Green Footballs, “As a former Republican myself, his account rings very true.”

Technology dominated the rest of the news discussion on blogs for the week.

Bloggers were quick to share the news and to share their sense about the future of Adobe Flash which many see as already on its way out. (Adobe announced on November 9 that it would no longer be developing a Flash browser plugin for mobile phones.)

“Flash is only used on 26 percent of all websites, and is in decline…Even if Flash does get released for Android Ice Cream Sandwich, it might not be as useful as one thinks,” wrote Ingrid Lunden at paidContent.org.

But at least one blogger thought users would miss having Flash.

“Despite what folks (Apple and more) think, there are still plenty of instances in which Flash is necessary for a full Web experience,” wrote Tech-Ex.

In third place on blogs was news about Apple products, always a popular topic online. This past week, the discussion covered purported early details on the 2012 updates to the iPad, iPhone and MacBook Pro and Black Friday discounts the Apple store was offering – which most thought were not great deals.

The epicenter of these deals, the Apple store itself, was the No. 4 story with buzz about a new Apple store in New York’s Grand Central Station and discussion over a Harvard Business Review article written by the former senior vice president for retail at Apple, Ron Johnson, about what he learned building the Apple store.

On Twitter, users shared news that the huge social network Facebook had introduced sponsored notifications on its news ticker. This means that companies can pay for “likes” to show up on Facebook users’ feeds. Twitter users thought this could be useful for advertisers – but also annoying to users. 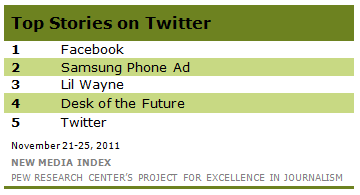 “Could be HUGE for political/news orgs,” tweeted Peter Passi.

Separately, an article from TechCrunch reported on a study saying that 50% of ecommerce site visitors are also logged into Facebook. Tweeters were impressed by the findings.

In second place was a new television advertisement for “>the Samsung Galaxy phone that made fun of iPhone users. Twitter users were fans of the snarky ad.

Also in tech, in fourth place, was a story and video about the “desk of the future,” an interactive desk that lets you perform tasks in a virtual space. Tweeters were impressed.

“Desk of the future!?!?! So cool,” tweeted BuzzBuzzHome.

“The future needs to get here soon! This is awesome,” wrote Emily Kinread.

And in fifth place was a story about TweetMap, a new site that allows you to see what countries your Twitter followers are in, broken down by percentage. While some tweeters were impressed by the service, others were not fans.

“Oh, I’m digging @TweepsMap to show me followers! Used it for the corp account first, makes a nice screenshot for presentations & whatnot,” wrote Becky B.

“We don’t recommend these tweepsmap people. They tweeted our stats without asking – and we don’t believe them either,” wrote The QI Elves.

“This @tweepsmap thingy could be useful if it would actually show you WHO lives WHERE. Who cares about percentages? #priorities” tweeted Ingo Bousa.

Still, more made jokes about the site.

The top news video on YouTube for the week was of UC Davis Chancellor Linda Katehi walking past Occupy protesters on campus. In the video, the protestors are silent as she walks to her car. Students and others had called for her resignation after police pepper-sprayed peaceful student protesters on November 18.

The second-place video was of a heated exchange between a congressman and a professor during a Natural Resources Committee hearing on oil drilling in the Arctic National Wildlife Refuge. Representative Don Young (R-Alaska) accidentally called the professor “Dr. Rice,” when he called his testimony “garbage.” The professor, Dr. Douglas Brinkley, corrected the congressman, saying, “It’s Dr. Brinkley, Rice is a university.”

Brinkley continued, saying that, “I know you went to Yuba College and couldn’t graduate …” when Young cut him off saying “I’ll call you anything I want to call you when you sit in that chair.”

The testy encounter went back and forth until the chairman of the committee stopped the squabble.

Note: This week’s sample for blogs and Twitter did not include stories from November 24 and 25 for technical reasons