Last week, the top story among bloggers celebrated their role in reversing one company’s unpopular decision. Positive reaction to the news that Netflix had abandoned its plan to split its DVD rental and online streaming services was the No. 1 topic from October 10-14, according to the New Media Index from the Pew Research Center’s Project for Excellence in Journalism.

Indeed, the saga has consumed bloggers for the better part of a month. In July, Netflix announced a price hike for its video rental and streaming service. Then in September, it said the company would split into two parts with the online streaming operation to be called Qwikster. Many bloggers criticized those moves, complaining about the inconvenience and inefficiency of dividing those services. That response led company CEO Reed Hastings to offer an apology and explanation on September 18 of why the changes were necessary.

Still, Netflix users were not satisfied. The No. 2 story on blogs from September 19-23 featured bloggers assailing Hastings’ apology note, with many predicting that the proposed changes would harm the company. The next week, (September 26-30), that was still the No. 3 story in blogs.

Then on October 10, Hastings shared another letter on the Netflix website, explaining that DVD rentals would stay at Netflix.com. “In other words,” he wrote, “no Qwikster.” In response, bloggers applauded Netflix for abandoning its plans after the online feedback. 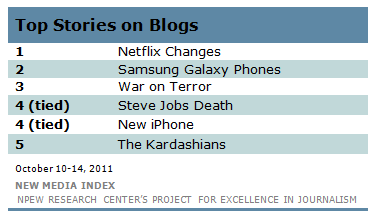 “This is a big win for crowdsourcing,” said Mike Schaffer on The Buzz by Mike Schaffer, “A company’s consumers told them in every way possible-blogs, tweets, Facebook posts and even videos…In the end, the company fixed the issue that they created, but what did they really accomplish? Customers are ticked off and you basically said it’s their fault. Not good.”

“Netflix has come to its senses and revised its strategy in favor of the customer,” wrote Nigel Fenwick on his blog, “After a recently announced decision to split out its DVD business from its streaming business, Netflix received a barrage of criticism from customers-including my last blog post, where I questioned the wisdom of this strategy.”

“Netflix did the right thing in ceasing their Qwikster plans,” wrote Steve Jones on Dominate, “It will still be an embarrassment that will stay on their record forever, but that’s considerably better than the colossal failure of a DVD business they’ve spent over a decade to build.”

The New iPhone and Steve Jobs

As is often the case in social media, events related to Apple were among the most popular topics last week. The new iPhone, introduced on October 4, registered as the No. 1 story on Twitter and tied for No. 4 on blogs, along with a continuing discussion of the October 5 death of Apple co-founder Steve Jobs.

Anticipation about the new iPhone had been a main point of conversation in the blogosphere for nine of the past 10 weeks. Two weeks ago, October 3-7, bloggers were less than enthusiastic about the iPhone 4S, with many complaining they had expected an iPhone 5, but instead got a 4S model that was looked physically identical to the iPhone 4.

But last week, much of that grumbling dissipated as many bloggers and tweeters were delighted about the features of the new 4S, especially the phone’s speed and its Siri feature, which allows users to give the iPhone voice commands.

The processor in the iPhone 4S is not as fast as the one in the iPad 2, “However, its real-world scripting, browser and graphics performance currently puts it well ahead of its main Android competition, in the Samsung Galaxy S II and the Motorola Droid Bionic,” wrote Electronista.*

“It looks like we’ll be able to trigger the AI secretary just by lifting the phone, allowing us to talk into it like an actual conversation, instead of speaking to it from afar like lunatics,” wrote Sam Biddle at Gizmodo.

On Twitter, the Siri feature was the major focus. A frequently shared Tech Crunch review proclaimed, “This is the best iPhone yet,” and several sites providing funny responses from Siri were heavily shared.

“SO FUNNY. Siri in iPhone 4S turns out to have QUITE a sense of humor,” tweeted David Pogue, a tech reporter for the New York Times.

Others on Twitter were excited that Sprint would be able to carry the iPhone. Previously only AT&T and Verizon carried the phone on their networks.

The week of October 3-7, Steve Jobs’ death was the top story on twitter and No. 4 in blogs. Last week, it stayed in the No. 4 slot on blogs.

Bloggers shared the news that Sony Pictures had acquired the rights to make a movie of his authorized biography written by Walter Isaacson. The book, which was expected to be released in 2012, will now come out on October 24, 2011.

Bloggers also shared a humor piece from The Onion about the tech leader as well as a story about why he wore the iconic black turtleneck.

“It’s curious to look back and think about the kind of brand affiliation Apple would have if Jobs would have dressed like every other CEO,” wrote Alex Heath at Cult of Mac, “It may seem like an insignificant detail at first, but everything Jobs did was intentional. He knew that creating a signature style would give Apple a unique relationship with its customers.”

Other tech news dominated the blogosphere this past week, with speculation about another smart phone and news that a computer virus had infected U.S. military drones.

A snapshot of a slide that was purportedly from an internal presentation on smartphone evolution at Samsung was released on Phandroid on October 10. And Android fans wasted no time in speculating about the future of the Galaxy, despite the fact that the slide seemed fake.

“We haven’t even finished rolling out the three U.S. flavors of the Samsung Galaxy S II and we’re already starting to look at rumored specs for its successor. At least, that’s what we believe we’re getting here,” wrote Scott Webster at AndroidGuys.

“Technology in the mobile sector is moving so fast that you’re device is outdated by the time you turn it on, and Samsung’s right here on the cuff,” wrote Chris Burns at Slash Gear.

“We’re still awaiting the release of the Samsung Galaxy S II on T-Mobile this week, and yet it’s already starting to look like yesterday’s half-eaten breakfast. That’s because some fuzzy details are now leaking out about its inevitable successor, the mystical Galaxy S III,” wrote Brad Molen on Engadget, who also speculated that the photo was a fake.

At No. 3 was a story from Wired about a computer virus infecting America’s Predator and Reaper drones, logging the pilots’ keystrokes as they remotely fly the drones over Afghanistan and other war zones. While there were “no confirmed incidents of classified information being lost or sent to an outside source,” according to the article, multiple efforts to remove the virus were ineffective.

Much of the response linked to the article itself, but several bloggers voiced concern about what it meant for national security.

“Granted, it seems to be nothing but a lowly keylogger, but the prospects of this are pretty big,” wrote Mohammad at Body and Soul.

“So far the virus hasn’t interfered with the drones’ missions, but that only means that Skynet is biding its time . . .” said Walter Jon Williams on his site, alluding to the evil force in the Terminator movies, an artificial intelligence system that becomes self-aware and revolts against its creators.

Registering as the fifth-biggest story on blogs last week was a comparison, by the E! entertainment site, of the Kardashian family to the British royal family. The basis of comparison might have seemed a little thin, however, since one area of common ground was apparently the fact that both Kim Kardashian and Kate Middleton were “fashionistas.”

“Okay, so it ain’t exactly the Royal Wedding-though there have been, er, comparisons-but we can’t pretend we haven’t been looking forward to the Kardashian nuptials with at least some of the same shameless excitement,” wrote The Noryanna.

In addition to glee over the new iPhone model, Twitter was solidly about tech news last week.

The No. 2 story on Twitter was about Facebook, with tweeters sharing several Mashable articles about the social media giant. One piece listed reasons why job recruiters like Facebook better than the work-related social network LinkedIn. Another listed the most popular musicians to subscribe to on Facebook. One of the musicians listed, Jared Leto, tweeted a thank you for being included on the list, sparking hundreds of retweets.

“This is a really smart app, should do really well. Giftiki – Everyone gives a little – together you give a lot,” wrote Joe Frohlinger. 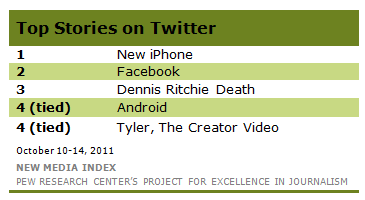 “If Steve Jobs was a key player in our field, Dennis Ritchie wrote the field itself,” wrote Gustavo Niemeyer.

“dennis ritchie is gone but the memory we’ve allocated to him will live on forever,” tweeted pinboard.

Tied for fourth place was a video of a “>statue of the Android logo that looks like an ice cream sandwich being erected on Google’s campus. The new operating system for the Android phone is called Ice Cream Sandwich. That story was tied with attention to a music video from the rapper Tyler, The Creator.

Sometimes the most popular videos on YouTube reflect a kind of gruesome interest in unusual and dramatic incidents. That was the case last week, as the No. 1 video was of a Spanish bullfight that went horribly wrong for the matador.

Television footage from Canal+ captured the October 7 bullfight that resulted in a bull goring matador Juan Jose Padilla, piercing him through the jaw and emerging through his left eye socket. The Associated Press reported that Padilla was likely to suffer facial paralysis and lose sight in one eye.

The No. 2 news video, also from Europe, showed French Socialist party candidate Ségolène Royal in tears in front of the news cameras, expressing her disappointment after coming in fourth with 7% of the vote in the first round of her party’s presidential primary.