The anniversary of the 9/11 attacks dominated social media from September 12-16, registering as the No. 1 subject on blogs and Twitter and among the top YouTube videos, according to the New Media Index from the Pew Research Center’s Project for Excellence in Journalism.

And the way the story played out last week out helps illustrate the different functions of the three online platforms.

The conversation on blogs, often a forum for debate, was passionate and ideological in response to columns criticizing how Americans were treating the anniversary of the attacks.

On Twitter, a primary vehicle for passing on information, users mostly shared a dramatic photo of the two streaming spotlights at Ground Zero.

On YouTube, an eclectic platform for sharing everything from dramatic images to humorous commentary, two very different videos were prevalent last week. One was straightforward “>footage of the second plane crashing into the South Tower, while another was a detailed-and somewhat sarcastic-defense of “>conspiracy theories surrounding the attacks.

The two most linked-to September 11 pieces in the blogosphere were from men far apart on the political spectrum, but who came to the same broad conclusion-that Americans were not treating the anniversary of the attacks appropriately.

One was a post on the New York Times’ website from liberal columnist Paul Krugman who argued that the September 11 attacks had been shamefully politicized. Another op-ed piece, from conservative Mark Steyn, posted on the National Review Online, contended that the U.S. had turned the 9/11 anniversary into a misrepresentation of that day’s events.

Krugman declared that the 9/11 attacks, rather than being a unifying event, were instead used to justify a divisive war in Iraq. “The memory of 9/11 has been irrevocably poisoned,” wrote Krugman, “it has become an occasion for shame. And in its heart, the nation knows it.”

That view was widely panned by both conservatives and liberals.

“Yes, that’s a nasty partisan attack on a day when most of us try to frame our commemoration of the anniversary in non-partisan terms,” wrote Ed Morrissey on Hot Air, a conservative site, “It’s so trite, sad, and cliched that it’s hardly worth the effort to rebut.”*

“The moonbat runs deep in this one,” wrote conservative blogger Bluegrass Pundit.

George W. Bush’s Secretary of Defense, Donald Rumsfeld, tweeted that he canceled his New York Times subscription because of Krugman’s post, and his tweet sparked commentary on the blogosphere as well.

“Fox News stunned to learn Rumsfeld had been reading the New York Times,” joked Running Chicken. “So…Rumsfeld cancelled his New York Times subscription over something that he could have only read online?!?” tweeted James Skylar Gerrond.

Liberal commentators objected to Krugman’s piece too, with some of them faulting him for playing into the hands of conservatives.

“The conservative blogosphere is going crazy condemning Krugman’s article-and I don’t blame them one bit,” wrote Rick Ungar for Mother Jones, a liberal publication. “Indeed, the only thing I do not understand is why more progressives are not joining in that condemnation, as Krugman’s piece only serves to set back the principles and causes of liberals and progressives everywhere.”

“Paul Krugman’s piece was on point,” wrote John Amato at Crooks & Liars, “When I saw his piece I knew the hissy fit was coming.”

“No, there is no obligation to call out Paul Krugman because the right wing blogosphere is acting, as usual, like a bunch of hypocritical phonies and staging a grand hissy fit to destroy one of the only strong national voices for the left over something they don’t really give a damn about,” wrote Digby.

Steyn’s piece generated far less commentary-more bloggers passed the column on without comment. Those that did generally concurred with him.

Steyn argued that Americans have retreated to “cultural self-loathing, and utterly fraudulent misrepresentation of 9/11,” by focusing more on topics such as diversity and healing rather than the dramatic events, heroes, victims and villains of that day.

The No. 5 subject on blogs last week, the ongoing battle against terror, had natural tie-ins with 9/11.

One post linked to terror was a first-hand account of being forcibly taken off of an airplane in Detroit and then being detained on September 11 of this year. The post was written by blogger Shoshana Hebshi who describes herself as a “dark-skinned woman of Arab/Jewish heritage.” Another article came from Wired about how the FBI was teaching agents that mainstream American Muslims are likely to be terrorist sympathizers.

If 9/11 triggered an ideological debate in the blogosphere, the reaction on Twitter was more unified. On that platform, the remembrance of 9/11 revolved around a much-tweeted and haunting nighttime photograph of the blue-hued spotlights at Ground Zero shining through an opening in the clouds.

Many Twitterers who shared the image thought it was beautiful and touching.

Guessing About the New iPhone

The not-yet-released new version of the iPhone continued to create a buzz on blogs and Twitter last week. Indeed, that topic has been one of the top five blog stories for six out of the last seven weeks.

On blogs, several different stories covering rumors about the phone were shared, making it the week’s second biggest topic. Almost all of the response was from tech bloggers also speculating about the new iPhone and its design.

“The next iteration of the iPhone, once the technological master of the smart phone universe, is likely to be nowhere near the top of the today’s most innovative phones,” wrote Steward Wolpin at Dvice, “Yet we’ll be treated to the usual Apple hoopla and subsequent huge sales, perhaps huger than any iPhone before it.”

“Another day, another fresh stack of iPhone 5 rumors,” wrote Chris Gayomali at Techland.

On Twitter, where the iPhone ranked as the No. 3 story, two items from Mashable were often shared: one discussed how the demand for the new phone would be high and the other was about the president of another phone company, HTC America, declaring that his college-aged daughter and her friends thought iPhones were for “old people.”

Other Top Stories on Blogs

Another tech topic, this one concerning Android devices, was the No. 3 story on blogs last week. The focus was 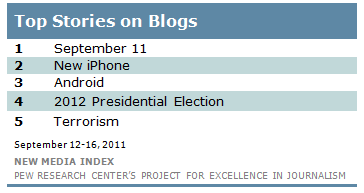 on GameStop deciding to use Android for its own-brand gaming tablet and on a positive review of the Droid Bionic from übergizmo. Much of the response from both of these articles came from tech blogs where there was excitement about both products.

“GameStop offering cloud gaming services on a portable basis with a familiar controller may be quite compelling indeed,” wrote Conrad Zimmerman at Destructoid.

In fourth place on blogs was the 2012 presidential election. The storylines involved the Republican Party and its candidates for the presidency and how the Democratic Party recently lost two congressional seats in special elections, a development which many analysts said does not bode well for President Obama.

In addition to the September 11commemorations and the iPhone, the other top stories on Twitter involved new developments in the tech world.

The No. 2 story was about Twitter itself and one major component was a new Web Analytics tool that allows Twitter users to understand where their traffic comes from.

The other Twitter storyline was that Twitter is now available in five more languages, bringing its total to 17 differen 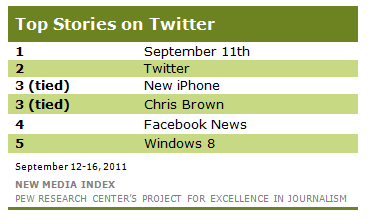 t languages. Users made jokes about this, while a few complained that their language of choice was not yet included.

Tied for third place with stories about the new iPhone was a picture of the singer Chris Brown kissing a Betty Boop statue.

Another tech giant, Facebook, was the No. 4 subject. The stories were also about new features coming to the popular social network. One was a new Subscribe button that has implications for “journalists, celebrities and other thought leaders.” The button will allow people to follow updates from these famous people.

The last tech story for the week, in fifth place, was the Windows 8 operating system, expected to be released in late 2012. Twitter users shared news of Microsoft’s plans to battle against the iPad with the new operating system.

The most viewed news-related video on YouTube last week was a 45 second video clip from BuzzFeed of the September 7, 2011 Republican presidential debate, summing up that event by showing the Republican candidates repeating the words “Ronald Reagan” and “tax.”

The No. 4 video was a sarcastic clip explaining and defending various “>conspiracy theories that surrounded the attacks. And the No. 5 video, a little over two minutes long, was footage of the “>second plane hitting the South Tower of the World Trade Center.

The Mosque Debate Continues to Galvanize the Blogosphere