The ousting of Yahoo CEO Carol Bartz was among the leading subjects on both blogs and Twitter last week, with many users supportive of the controversial tech executive.

For the week of September 5-9, the news of Bartz’s dismissal was the No. 2 story on Twitter and the No. 4 story on blogs, according to the New Media Index from the Pew Research Center’s Project for Excellence in Journalism.

Most in the tech world either liked or loathed Bartz, who became known for her crass language and her blunt leadership style. Yahoo, which has seen its standing amid web companies plummet the past few years, hired Bartz in 2009 to help turn the company around. So far though, not much headway has been made and Bartz seemed to rub many at Yahoo the wrong way.

An email Bartz sent to all Yahoo employees announcing her firing instantly became big news. Bloggers all over copied and pasted the text of the email sent from her iPad: “To all, I am very sad to tell you that I’ve just been fired over the phone by Yahoo’s Chairman of the Board. It has been my pleasure to work with all of you and I wish you only the best going forward. Carol.”

Many bloggers added admiring comments, particularly for the way she exited.

“[Her email] was a move so boldly 21st century that it made many (including us) like her a little bit more,” wrote Chris Gayomali at Techland.

“I read the email and thought that it was a classy way to go,” wrote Henry Blodget at Business Insider. “Carol’s note captured the emotion of the moment and conveyed it directly, in a language everyone could understand. She didn’t shrink from the truth, or sugar-coat it in ridiculous corporate-euphemism-speak. (e.g., ‘I have resigned to pursue other interests.’).”

“Man, this makes me love Carol Bartz a little (or a lot),” wrote Alexis Madrigal.

Some commented on what her firing meant for women in business.

“Wow. Bad day for women in Corporate America. Carol Bartz out at Yahoo. Sallie Krawcheck out at Bank of America,” wrote Julia Angwin.

Others made jokes about her personality and tendency to curse.

But still, there were some who applauded the company’s decision to let her go.

“Carol Bartz was a disaster for Yahoo. There’s not much time to save a once-great company, but it still has incredible assets…” wrote Dan Gillmor, the director for the Center for Citizen Media.

A few blogs considered the future of the once powerful Yahoo, and noted that the firing of its CEO did not necessarily bode well for the company.

“The firing of Carol Bartz by Yahoo’s Chairman of the Board has opened a new chapter in this once might tech giant’s demise,” wrote Kevin Minott at Komverse.*

News about another tech giant also registered among the leading topics on blogs (No. 3) and Twitter (tied for No. 3) last week. The main focus was Google’s acquisition of Zagat, a company known primarily for its restaurant ratings.

Zagat, a 32-year-old ratings company that started in print, is quite different than the digital startups that Google tends to purchase. But in recent years, Zagat has moved to the web and mobile apps, making it a competitor to Yelp and Foursquare by providing online reviews and local searches.

Bloggers largely felt that the purchase was a good move for Google.

“Today, Google announced that it had acquired Zagat, the popular restaurant ratings provider. It’s an important move, more for what it tells us about Google and the evolution of its strategy than it does about the restaurant rating game,” wrote Joshua Gans at Harvard Business Review’s blog.

“This is huge news for Google (capital “H”) and for local. Google is a content publisher now and the content that Zagat brings arguably closes the gap between Google Places and Yelp. We’ll have to see the implementation,” wrote Greg Sterling at search engine land.

“Sounds great, guys, as long as your new found friendship helps us find the best bacon-flavored ice cream cone, we’re all for it,” wrote Lydia Leavitt at Engadget.

On Twitter, the response was similar, with many tweeters comparing Zagat to Yelp.

“Wow, not Yelp, but it did get next best: Google buys Zagat,” tweeted Rafat Ali.

“Why is Google+Zagat a big deal for restaurants? Now Zagat’s brand name will be atop search engine results, heretofore monopolized by Yelp,” said Kevin Pang.

Some of the other blog attention to Google last week focused on products the company has decided to shut down or merge into other products, as well as a possible bid to acquire the online video service Hulu. 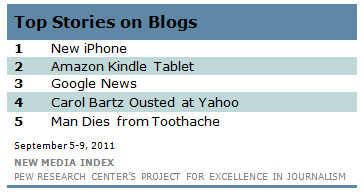 Some other top stories on blogs last week were also tech-related, including several about business deals in the tech world. The top story was about the new iPhone, mainly focused on rumors about the new model-would it be smaller? Thinner? More tapered? Could it be on the Sprint network? Others discussed the fact that the game reselling store, GameStop would begin to trade-in used iPhones, iPads and iPods for in-store credits (and begin selling those products as well). The iPhone has been a top story on blogs for the past three weeks.

In second place was another glimpse at a new tech product, the Amazon Kindle tablet, which is a full color, seven-inch touch screen that runs Android. The tablet will cost $250 when it comes out.

Wrapping up the top five blog topics was a story about a man who died from an infected tooth because he did not have health care insurance and could not afford to either extract the tooth or to treat it with antibiotics.

The remaining top subjects on Twitter varied in subject matter.

In first place, were tweeted photos of Justin Bieber, that showed the pop idol playing basketball, frolicking with a beluga whale and hanging out with a friend. 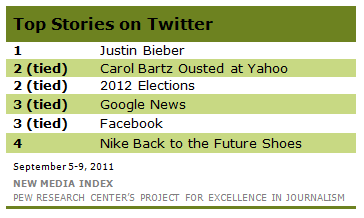 Tied at No. 2, with the Bartz firing, were several stories about the 2012 elections. One featured live Huffington Post updates of the September 7 GOP debate and the other two were about statements that Teamsters President James Hoffa Jr. made at an Obama Labor Day event, one from Real Clear Politics and the other from liberal group Media Matters. In Hoffa’s Labor Day speech, he referred to the Tea Party in crude terms. Also, Barack Obama’s 2012 campaign website was frequently linked to.

Tied at third, with the story about Google acquiring Zagat, was news of Facebook beginning to test friend filters in its news feed. The filters will allow people to automatically categorize friends, much like Google+’s Circles.

In fourth place was a story about Nike releasing Air Mag sneakers, based off the shoes that Michael J. Fox’s character Marty McFly wore in the 1989 movie Back to the Future II. A ” target=”_blank” rel=”noopener noreferrer”>video advertisement for the shoe, with Christopher Lloyd from the original movie, was also frequently tweeted. The sale of the shoes will raise money for the Michael J. Fox Foundation for Parkinson’s Research.

On YouTube, animal oddities drew the most attention last week.

The No.1 video was a report on the discovery of a piglet born with what looked like a human-shaped head in a remote Guatemalan village, Santa Cruz El Chol. Local residents blamed aliens from outer space for the piglet’s bizarre face, since it was born on the same night locals spotted strange bright lights hovering in the sky. But health officials said the mutation was caused by a genetic problem or by environmental pollution.

The No. 2 video was an AP clip showing the capture of a one-ton, 21-foot saltwater crocodile by a group of villagers and veteran hunters in a remote southern Philippine village. The giant crocodile, possible one of the largest to be ever caught, is suspected of having killed humans and livestock.