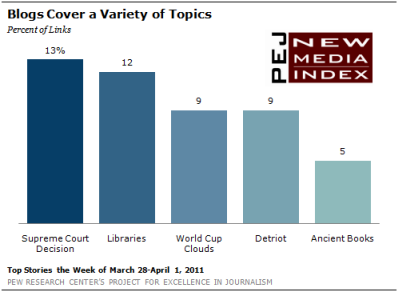 Bloggers conversed about an eclectic mix of topics last week that were far from headline news on front pages or cable talk shows.

The top stories on blogs from March 28-April 1 ran the gamut from the Supreme Court to ancient texts, according to the New Media Index from the Pew Research Center’s Project for Excellence in Journalism.

The No. 1 story, with 13% of links, was a Supreme Court decision overturning a verdict awarding $14 million to a man formerly on death row. A close second, with 12% of links, was a BBC radio piece by author Zadie Smith arguing against closing public libraries. Tied for third (9%) was a story about the creation of artificial clouds to provide shade for the 2022 World Cup in Qatar and an op-ed column about the collapse of Detroit. The final story (5%) involved photographs that may shed light on the early years of Christianity.

This assorted mix demonstrates social media’s ability to galvanize different communities of interest around topics that may be a bit off the beaten path. It’s also worth noting that last week there was considerably less of the ideological tinge to the conversation that often marks the hottest debates of the day.

On Twitter, the week was more typical. All the top stories were technology related. Even one that focused on April Fools’ Day pranks was actually about online mischief.

And for the third week in a row, the No. 1 YouTube news video was of the Japanese earthquake and its aftermath.

Many bloggers took issue with the 5-4 ruling by which the Supreme Court overturned a jury verdict that awarded $14 million to John Thompson, a man who had been on death row for murder. Thompson was later declared innocent thanks to a blood test that did not surface during the trial, and he subsequently sued then New Orleans District Attorney Harry Connick, Sr. (father of the singer) for damages. The story was also picked up by the website Gawker, increasing its popularity online.

Bloggers contended that the Supreme Court failed to send the right message about wrongful convictions.

“They’ve just given prosecutors a blank check to put innocent people in jail without fear of the consequences. D-I-S-G-U-S-T-I-N-G!!!!” wrote Attaturk at Rising Hegemon.

“I’m no legal scholar, and I don’t know what constitutes ‘deliberate indifference,'” wrote Alan on Liberaland, “But there’s certainly a pattern of defendants getting convicted by Connick’s prosecutors, getting sent to death row, and then later getting their death sentences overturned.”

Legal blogs also picked up on the case, writing straightforward accounts of the case and its implications.

The number two story reflected the often international flavor of the blogosphere as commenters responded to a BBC Radio program in which British author Zadie Smith staunchly defended libraries. The famous author recounted her childhood in a flat surrounded by books even though her family was poor, thanks to the library. Smith’s local library was slated for closure for budgetary reasons and she spoke up to explain why this was a travesty.

Most of the response was from British bloggers agreeing that libraries are valuable to their communities.

“Local libraries are gateways not only to other libraries, but to other lives …” wrote Andrew King on Downed Robin. “That the grotesque losses of the private sector are to be nationalised, cut from our schools and our libraries and our social services and our health care, in short, from our heritage, represents a policy so shameful, I doubt this government will ever live it down.”

“My goodness, Zadie Smith has stirred things up. She did a five-minute slot on Radio Four in defence of libraries this morning and all hell breaks loose at the Telegraph. No less than four articles about (well, against) it,” wrote Ian Anstice of Public Libraries News, a blog that fights the closure of libraries in Britain.

“If you want an informed society, and a society willing to educate themselves and others, cutting funding for public libraries is a bloody good way to prevent that from happening. This government are a bunch of barbarians. It wasn’t libraries that caused the financial crisis: it was bankers, cut them instead,” wrote Tom Morris (author’s emphasis).

At least one blogger looked at the issue from an American perspective.

“With the budget debates ongoing in Washington and across the country, libraries are often an easy target for politicians who are thinking more about the chopping block of the next two years,” wrote Leslie Pitterson of Clutch Magazine, an online publication geared toward African American women. “Zadie Smith’s involvement in efforts to save her local library should make many of us think about our own.”

One of the more detailed discussions last week occurred when BBC Radio released photos of a set of books purportedly found in a Jordanian cave sometime between 2005 and 2007. If the books are genuine, they are expected to shed new light on the early years of Christianity.

“I’ll offer some reasons for caution in the face of the extravagant claims made by some,” wrote Larry Hurtado. “The reported symbols inscribed in the items seem as/more readily to point to a Jewish origin.”

“If the text can be decoded and confirms the claims about who wrote these books and when, then indeed this could be a discovery of the first importance,” wrote Peter Kirk of Gentle Wisdom, “But failing such confirmation the books will be no more than a historical oddity, worthy of a place in ‘a Jordanian museum’ but not of worldwide attention.”

“A few of the images that have been made available have letters on them. Can we please get the best minds in the biblioblogosphere, with skills in epigraphy and paleo-Hebrew script, working on providing an initial transcription?” wrote Dr. James F. McGrath at Exploring Our Matrix.

Those from less-academic backgrounds, who were focused on religion, seemed more enthused about the findings.

“But what really excites me about this whole business is the potential it has to cast an authentic historical light on Christian origins,” wrote Andrew Perriman at p.ost, “We little appreciate the extent to which our minds and imaginations-and therefore our reading of the New Testament-have been conditioned by 2000 years of densely layered theological reflection. Perhaps this ‘find’ will be like a flash flood that washes away enough of the interpretive sediment to give us a glimpse of-and a feel for-the pre-Christian strangeness of the New Testament story.”

The top stories on Twitter, as is often the case, focused on technology and the web last week.

The No. 1 story, with 9% of links, was about Google’s new +1 service which is explained as a “public stamp of approval.” When you “+1” something, your name becomes associated with that link and shows up on your Google profile. Most people who opined on it on Twitter were those who worked in social media-and they were not impressed. 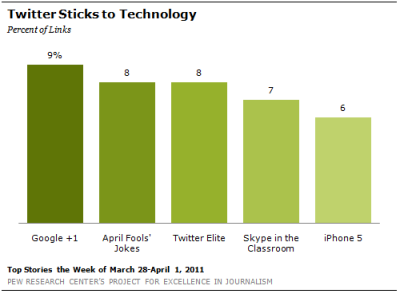 “Until further notice, google +1 reads very much like their @Digg experiment from 08-09,” wrote Brian Q Pham.

A few people on Twitter found it interesting, though: “Google +1 mass I’ve game changer, if it an seo and you’ve not checked out yet. Do so! Immediately.”* Wrote Allan Stewart.

Tied with 8% of links was a Mashable article about the company’s favorite April Fools’ jokes online and a study about the “elites” on Twitter. According to a Yahoo Research study, 50% of tweets consumed come from only .05% of all Twitter users.

“I’ve joined the Twitter elite to fight the forces of Evil,” tweeted a fake Harry Potter.

In fourth place with 7% of links was a story about using Skype in the classroom. Much of the response on Twitter was from teachers or educators.

“I signed up for Skype in the Classroom. Have you? As an online teacher, I can think of so many possibilities,” tweeted Sandra A. Rogers.

“Homeschooling Friends, might be interesting to explore…” wrote Todd Manning.

Wrapping up the roster of top subjects was a story about the potential delay of the release of the iPhone 5, with 6% of links.

For the third week in a row, the top video on YouTube was of the Japanese earthquake’s aftermath. The almost four-minute video shows a Japanese Coast Guard vessel moving uneventfully in choppy water, a departure from the dramatic scenes of destruction in the previous weeks’ videos.

Crime and Punishment Lead on Blogs

Bloggers Focus on a Supreme Court Justice and Social Security