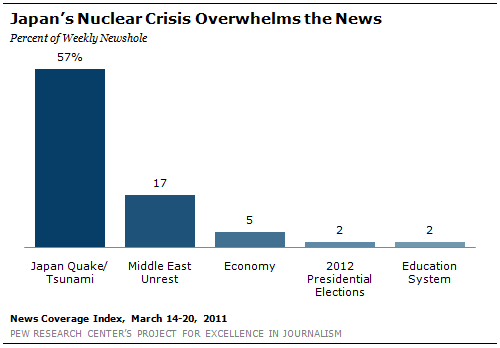 The U.S. media began a challenging and dramatic week mobilized to cover growing radiation fears in Japan. They ended it reporting on U.S. military intervention in Libya’s civil war.

For the week of March 14-20, the still unfolding drama at a Japanese nuclear facility and continuing coverage of the humanitarian catastrophe there accounted for 57% of the newshole, according to the Pew Research Center’s Project for Excellence in Journalism. That makes it the third-biggest story in a single week since PEJ began tracking news coverage in 2007.

Things changed dramatically, however, on Thursday, March 17 when the United Nations voted to enact a no-fly zone in Libyan air space to be enforced by the U.S. and its allies. At that point, the priorities of the mainstream media shifted abruptly.

From Monday through Thursday, the situation in Japan accounted for nearly-two thirds of the overall coverage (64%) while the Mideast accounted for only 10%. But on Friday, the Libyan crisis generated more attention than Japan and remained atop the headlines throughout the weekend.

The military action in Libya—combined with a small amount of attention to Bahrain, Egypt and other troubled countries in the region—was the No. 2 story, accounting for 17% of the newshole and relegating Japan to secondary status by the end of the week.

With these two top events combining for 74% of the coverage studied, overseas stories have now led the news agenda for seven out of the past eight weeks. Indeed, from January 24 (when the protests heated up in Egypt) until March 20, foreign news has accounted for more than 40% of the overall U.S. media newshole, about twice the usual level of attention.

The extensive focus on events in Libya and Japan left little room for other stories. Well back at No. 3 (5%), was the U.S. economy. The newsmakers there included a Wisconsin judge blocking the recently passed bill that would limit collective bargaining rights for public employees and the House of Representatives voting to defund NPR, which has turned into something of a partisan issue.

At No. 4 (2%) was the 2012 presidential election. No single theme emerged in the coverage, although some pundits did make arguments that two of the country’s best-known politicians—the president and former vice-presidential nominee Sarah Palin—would face some significant electoral obstacles.

The U.S. education system was the fifth-biggest story (2%) as several news reports highlighted the impending 10-year anniversary of the No Child Left Behind Act, which President Obama said he wants rewritten before the next school year.

A story that seemed almost like an afterthought by Sunday was anything but that for most of the week.

The aftermath of the Japanese earthquake was the top story in every media sector studied by PEJ, but network TV led the way, devoting 82% of the airtime studied to the story last week. Closely behind was cable news, at 73%.

“Japan and the world trying to deal with two overlapping crises right now, the humanitarian disaster and then the urgent effort to control an unprecedented nuclear emergency,” said ABC’s Good Morning America anchor George Stephanopoulos on Monday, March 14, following a second explosion and a third partial meltdown at the Fukushima Daiichi nuclear complex in Japan.

While the disaster offered plenty of powerful visuals that aided the extensive television coverage,  news organizations made contributions by providing explanations of the ramifications of the damage to nuclear facilities.

When Tokyo Electric said radioactivity levels were higher at the plant than normal, the Washington Post parsed the technical aspects of what that meant: “Radiation at the plant’s premises rose over the benchmark limit of 500 microsievert per hour at two locations, measuring 751 microsievert at the first location at 2:20 a.m. and 650 at the second at 2:40 a.m., according to information Tokyo Electric gave the government. The hourly amounts are more than half the 1,000 microsievert to which people are usually exposed in one year.”

The storyline grew increasingly ominous as a deluge of sea water failed to cool the reactor cores at the Fukushima plant. On March 15, the Wall Street Journal reported that “Japan’s nuclear crisis showed signs of spinning out of control.”

That night, NBC Nightly News anchor Brian Williams posed the question of how much worse the situation could get to Professor Frank von Hippel, a widely interviewed Princeton expert on nuclear energy. “It could potentially approach a Chernobyl-type situation,” said Hippel.

On Wednesday March 16, the news seemed to get even worse.

“Adding to the alarm tonight [are] statements from top Obama administration officials that they too are getting mixed signals and conflicting information from Japan. And those new U.S. assessments that the crisis at the Fukushima Daiichi complex is more grave, U.S. officials say, than the Japanese people are being told,” said John King in his CNN prime-time program that evening.

By Thursday March 17, however, there were some reports that weren’t as grim.

That day, a Voice of America story on Google News, called the situation “serious but stable…The U.N. nuclear agency says the situation at Japan’s earthquake and tsunami-crippled nuclear reactor is ‘very serious’ but there has been ‘no significant worsening’ in the past 24 hours.”

It was at this point in the week that stories began to take a more U.S.-centric approach, looking at the disaster’s impact on the U.S. domestic nuclear industry, as well as fears in U.S. of radiation poisoning in this country.

Those fears—which spiked briefly amid news reports of west coast residents making a run on potassium iodide pills to protect against radiation—were quickly debunked in much of the media. As Gregory Jaczko, chairman of the Nuclear Regulatory Commission, said in an NPR story from March 18: “Basic physics suggest little risk to anyone in the United States.” 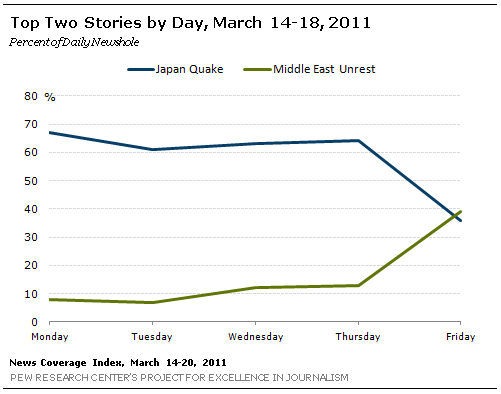 But the volatile situation in Libya captured the world’s—and the media’s—attention on Thursday when the United Nations Security Council voted to authorize military action against Gaddafi.

Both President Obama and Secretary of State Hillary Clinton gave speeches on March 18, he from Brasilia, she from Paris. As the networks waited for Obama’s remarks, there was a sense that the U.S. military was about to get involved.

“As you know, the president of the United States, the Secretary of State, they’ve been saying for days now that Gaddafi must go,” said Wolf Blitzer on CNN. “Well, he hasn’t gone, he’s only intensified his offensive against the rebels, against the opposition. So it’s going to have to be a lot more than just a U.N. Security Council resolution, and more tough talk, that’s not going to be enough.”

In that early coverage, some outlets noted that even though the U.S. was about to enter a war, the president was not eager to create the appearance that the country was taking the lead in this effort.

ABC’s Jake Tapper said on March 18 that “President Obama has done everything he can to internationalize this conflict in making sure that the Arab League is involved as well. He does not want to be seen as the United States once again attacking and invading a Muslim country. He wants us to be seen as the world vs. Gaddafi.”

A March 20 opinion piece in the Los Angeles Times asserted that Obama was going to war quietly. “This is not the way American presidents go to war. The opening act is supposed to feature the president sitting solemnly in the Oval Office, explaining the reasons, laying out the goals, talking tough. Barack Obama did not even announce the start to the third U.S. war in the Muslim world in a decade,”—leaving that for Secretary Clinton, who did so in Paris.

On the Fox News Channel, national security analyst KT McFarland said:  “The Devil’s in the details… “Who’s going to be part of this military engagement? What are they going to do? What’s the objective here? When are they going to start fighting? Is the goal regime change?”

On MSNBC on March 18, retired Army Col. Jack Jacobs was more blatantly pessimistic. “In the end, our waiting until now—until a time when there’s almost nobody left of the rebels to fight—means that Gaddafi has won. In the end, it really doesn’t matter what we do or what Gaddafi does.”

By Sunday morning, the story had moved from talk to action. New York Times readers were greeted with an image of a Tomahawk missile being launched from a Navy destroyer, under the headline “Allies Open Air Assault on Qaddafi’s Forces.” 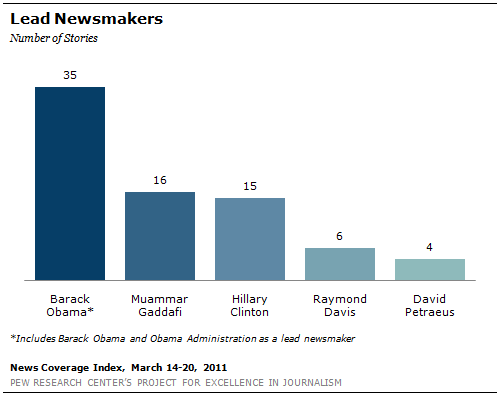 From March 14-20, Barack Obama was the subject of more media attention than any other newsmaker, featured prominently in 4% of all stories studied, a slight drop from 5% the week before. (To be a prominent newsmaker, someone must be featured in at least 50% of a story.)

Second to Obama was Libya’s Gaddafi, registering prominently in 2% of all stories. That is down slightly from 3% the previous week, but Libya did not really get back on the media front burner until late last week. Secretary of State Hillary Clinton ranked as the No. 3 newsmaker last week, also at 2%, drawing attention for her public statements on Libya as well her announcement that she would not serve a second term in her post.

The No. 4 newsmaker of the week, a former Special Forces soldier working for the CIA named Raymond Davis, was released from a Pakistan jail after being acquitted of two murder charges. He was featured heavily in 1% of stories. Finally, at No. 5, was General David Petraeus, (less than 1% of the stories) who delivered an assessment of the Afghanistan war to Congress.

In Social Media it’s All About Japan