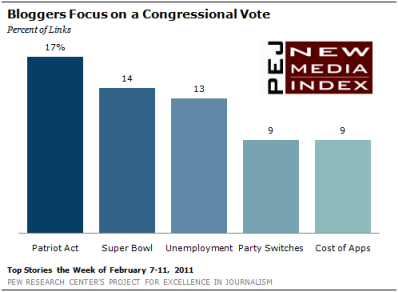 In a very rare confluence of events, the same subject led the conversation on both blogs and Twitter last week. And voices from both ends of the political spectrum were actually in agreement.

While the mainstream press focused on the resignation of Egyptian President Hosni Mubarak, social media galvanized around a vote in the House of Representatives on whether to extend the Patriot Act. From February 7-11, that was the top story on both blogs (with 17% of the news links) and Twitter (21%), according to the New Media Index from the Pew Research Center’s Project for Excellence in Journalism.

That marks the first time in almost 11 months that any subject was No. 1 on both Twitter and blogs in the same week, and only the fifth time since PEJ began its New Media Index in January 2009.

Concern for civil liberties transcended politics here as bloggers and twitterers on both the left and the right cheered the February 8 vote in the House which fell short of the super-majority needed to reauthorize the Patriot Act. (A week later, however, both the House and Senate passed a bill extending the Patriot Act for an additional 90 days.)

“The Patriot Act nullifies ALL your inalienable rights and freedoms. End it NOW!” tweeted Eugene Garner.

“The bottom line is that the Patriot Act IS a woeful invasion of our civil liberties, specifically the 4th Amendment’s protections against search and seizures. This thing needs to fail again and again,” determined Gadsden’s Snake.

Much of the conversation also commended the role played by Tea Party members in the House as 26 Republicans, a number of them from the Tea Party caucus, initially voted alongside most Democrats in opposing the bill. For most online, this action was a victory for the libertarian strain of the Tea Party movement.

“The Tea Partiers are doing what they are supposed to do,” applauded the Centerist Cynic. “Legislating according to their principles not according to the direction the political wind is blowing or according to who wrote the biggest check to their reelection campaign…So I’d like to say thank you to those 26 Tea Party members. Keep up the good work!”

“Been ambivalent toward the Tea Party until they voted to defeat the Patriot Act on principle. I think I can get behind these guys,” tweeted bigB_EOD.

“Does this mean that my lefty friends are going to thank the Tea Party for something?” asked Michael at Young Hip and Conservative. “Maybe, maybe not.”

Still some liberal voices, while supporting the Tea Party’s opposition to the Patriot Act, did not believe these legislators would continue to defy Republican leaders.

“It’s only a temporary lapse into normalcy,” predicted Jake Today. “They will soon obey their GOP masters, but it was nice to see them vote with the Dems to not renew the Patriot Act. I will be very surprized if the Teabags do not grovel at Boehner’s feet within the month–money, power, and reelection will win them over. Too bad.”*

Other bloggers decided that this vote was a defeat for the House GOP leadership because they were unable to secure the votes need for passage.

“In what was officially just the 12th day in session for the new House Republican majority, the wheels have come off the GOP vote-counting machinery,” announced David Waldman at Congress Matters.

The Rest of the News on Blogs and Twitter

The No. 2 story on blogs last week, at 14%, was a column by Washington Post sportswriter Sally Jenkins criticizing the lavishness of the Super Bowl in Dallas, including the high cost of parking and drinks. Bloggers generally agreed with Jenkins’ complaints, although there was some dispute about whether the Navy’s decision to fly four Navy F-18 jets over the stadium was worth the $450,000 in taxpayers’ money.

“We made this [Super Bowl] monster. We birthed it, we fed it, we nurtured it as it grew, and now we have to deal with the fact that it’s gotten huge and out of control,” declared Jimmy at Rantville Reborn.

A report that the U.S. unemployment rate fell to 9 percent in January from 9.4 percent in December was the third biggest subject, at 13%.

Two stories came next, both at 9%. One was a Los Angeles Times article describing how 24 state senators and representatives in Southern states have converted from Democrat to Republican since the midterm elections last November.

The other was a Washington Post story about the controversy over children who unknowingly ran up large bills using applications on the Apple iPad that are free to download initially, but then cost money once the app is launched.

On the social networking site Twitter, the second-largest subject last week was the turmoil in Egypt at 11%. In particular, twitterers linked to a Fox News report about President Hosni Mubarak’s decision to step down and expressed optimism about the events there. 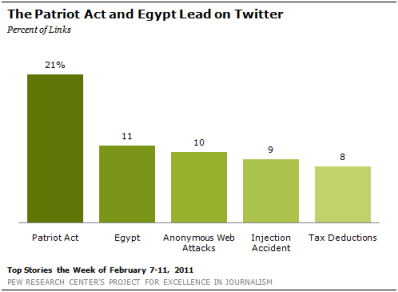 The third story, at 10%, was a Wired article about members of a group known as Anonymous. The group-which has been suspected of online attacks against companies that have suspended access to information related to WikiLeaks-hacked a security firm that was investigating it and claimed to have uncovered their true identities.

Fourth, at 9%, was a story about a British woman who died after she allegedly flew to Philadelphia to get silicone injections into her buttocks. And fifth, at 8%, was news that the IRS has reversed its long-held position and will now make breast pumps and other lactation supplies tax deductible.

For the second week in a row, some of the most-watched news clips on YouTube brought home violent images and the dark side of what was happening on the streets of Cairo before Hosni Mubarak resigned on February 11.

The No. 2 video, watched more than 1.8 million times last week, was a cell phone video of a diplomatic car that ran through a crowd of protestors, injuring at least 20 people. The identity of the driver is unknown, although the U.S. embassy in Cairo released a statement saying that none of their employees were involved in the incident. (Warning-the &skipcontrinter=1″ target=”_blank” rel=”noopener noreferrer”>video contains graphic images.)

The fifth most-viewed video includes footage of a protestor shot and killed in the streets of Alexandria, reportedly by Egyptian police. The identity of the man is still unknown. (Warning- the video contains graphic images.) CNN investigated the incident and produced a report available here.

In the Blogosphere, Calls for Bipartisanship and Confrontation