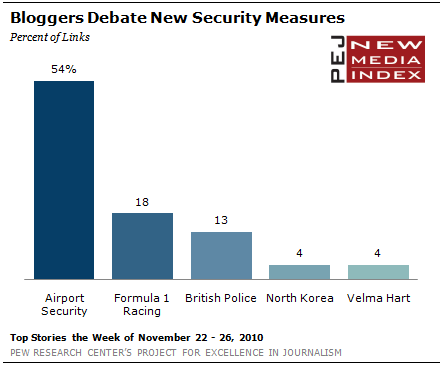 Anger and frustration over the new TSA airport security measures boiled over in the social media last week. And while much of the mainstream press reported or commented on that rage, those in the online community embodied those sentiments.

And, in a rare case of news agenda unity, heavy interest in the new measures cut across all three social media platforms studied in the New Media Index from the Pew Research Center’s Project for Excellence in Journalism. For the week of November 22-26, more than half (54%) the news links on blogs were about the security measures, making it the No. 1 subject.

They were also the fourth largest topic on Twitter with 9% of the links. And on YouTube, the new procedures were the subject of the second most popular news video as viewers gravitated to an element of comedic relief produced by a Taiwanese company.

Twitterers mainly drew attention to one specific incident concerning a cancer survivor whose urostomy bag ruptured during a TSA pat-down. Links to the story were often accompanied by words of empathy like Emi Lani Lee’s, "Feel bad for him," and Billy Shih’s, "I’m getting real tired of the TSA."

In the arena with the most discussion, the majority of bloggers emphatically agreed with-and even went beyond-two Washington Post columnists, Charles Krauthammer and George Will, who came out strongly against the airport security measures.

Krauthammer suggested that the phrase "Don’t touch my junk"-words adapted from an objection first uttered by an annoyed passenger in California-had become a new political battle-cry. Will argued that the TSA’s measures are nothing more than ineffective "security theater" which do not make passengers safer.

Many bloggers made similar points with more direct language, built not so much around personal experiences as passionate feelings about privacy and government encroachment.

"Security? Not really," wrote Wake Up America.  "Let’s not kid ourselves, while it is promoted as the fair approach to force all passengers to equal screening at airport security in the end we are less secure, less efficient and out of pocket with tax $s…The political correctness of today makes a farce of our nation and government." *

"If we want to get serious about checking out people who may be a threat to us, it is perfectly obvious to anyone with a lick of common sense that a three-year-old Texas girl poses no danger," added Ari Armstrong at Free Colorado. "In our era threats come from a small minority of those with ties to the Islamic world."

"These new TSA policies and procedures are political ‘security theater’, completely worthless in providing any actual security. The public ‘will tolerate only so much idiocy,’" argued GD Critter. "The only solution is to disband the Transportation Security Agency and turn their responsibilities over to someone who at least has some concept of what the responsibility entails."

Some critics linked to an investigative USA Today report about companies which make body scanning equipment that have more than doubled their expenditures for lobbying Congress over the past five years.

"This whole x-ray thing is nothing but a money making scam and the ‘pat downs’ being so intrusive will certainly cause many people to opt into getting the x-ray, thus more machines will be needed and more people will line their pockets at our expense," predicted Mountain Sage.

While in the minority, some bloggers challenged critics’ arguments as short-sighted or hypocritical.

"Like most who favor profiling," wrote Raul Ramos, "Mr. Krauthammer is vague about who should be targeted by the TSA. But you can bet CK thinks those being profiled should be people who do not look like him. However, profiling is more than institutionalized prejudice. It’s also dangerously stupid."

And Bob Cesca at The Huffington Post offered, "It’s not a stretch to suggest that the post-9/11 fear-mongering and massively exaggerated anti-terrorism hysteria created this supermajority of acquiescence to flagrant government overreach and violations of privacy and personal dignity…When you’re detained and forced to either submit to a naked body scan or, heaven forbid, have your ‘junk grabbed,’ thank a Republican."

And those bloggers who did share their experiences in the "pat-down" line, reported them as not so bad in the end.

"I went through the full body scan at Houston Intercontinental Airport on my way to Bangkok and I had the pat-search on the way back at airports that did not have the scan," recalled Prairie Pundit. "I did not think either was any big deal and they both took about the same amount of time, although the pat down may have been a little quicker. It seems like a reasonable response to the underpants bomber attempt by al Qaeda in Yemen."

The same security controversy was also a significant subject on YouTube last week as the second most-viewed news video was an animated news report by a Taiwan-based company called Next Media Animation, or NMA.

The company regularly creates news reports about the most popular subjects of the day. The videos have Taiwanese narration, often with English subtitles, and feature a humorous and exaggerated take on the news. Many of their reports have gained significant attention online such as their August video about Steven Slater, the JetBlue flight attendant who abruptly quit his job and fled his plane using the emergency exit.

In the airport security report, NMA describes Americans outraged over the increased security measures and portrays TSA employees as reckless and perverted workers. At one point, a nun is shown drop-kicking a TSA employee as an example of rebellious anger being expressed by many Americans.

Among the other stories that bloggers highlighted last week were three international topics and an update about a woman who first gained attention by questioning the President.

The No. 2 subject on blogs, at 18% of the week’s links, involved several articles about the international sport of Formula 1 racing. One such story was a BBC report about a driver, Mark Webber, who made a claim that his sponsor Red Bull favors another driver more than himself, thus sparking a media controversy.

A series of stories over the last few years about British police was third at 13%. These historical reports became popular now in the blogosphere because of current protests over tuition increases for the country’s university and secondary schools. Bloggers linked to older news reports to illustrate a history of inappropriate tactics used by police to subdue protestors, such as a 2009 BBC report about a review of tactics used by police during the G20 summit and a 2007 story about two protestors who lost their lawsuit against London police resulting from actions occurring during protests 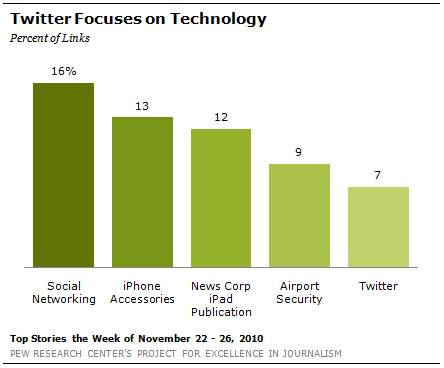 A Washington Post column by former President Jimmy Carter about how the U.S. should handle complex relations with North Korea was fourth at 4%. That was followed (also at 4%) by news that Velma Hart, the woman who gained national attention at a September forum for telling President Obama that she was exhausted defending him, lost her job due to financial cutbacks at the nonprofit organization where she worked.

On the social networking site Twitter, once again technology stories dominated the week.

The top story, with 16% of the links, was a Mashable how-to report about ways people can use social media to enhance events and conferences. Suggestions included "help attendees connect with each other," "broaden participation," and "encourage attendees to share information."

A list of accessories for the iPhone camera was second at 13%.

That was followed by a story about Rupert Murdoch’s newest foray into media with his iPad-only news publication, called The Daily, at 12%.

The controversy over TSA screening procedures was fourth at 9%.

And two stories about Twitter, one a preview of Twitter’s analytics service and the other an interview with Twitter’s Creative Director Doug Bowman, combined to finish fifth at 7%.

Bloggers Focus on a Supreme Court Justice and Social Security