On Twitter, meanwhile, this new medium’s election role was clearly defined and considerably different than the other media platforms studied. The social media tool has consistently displayed its organizing and galvanizing capacity in its response to a number of major events—from marshalling support for the Iranian protesters in 2009 to aiding relief efforts after the Haiti earthquake in 2010.

When it came to the midterm voting, Twitter users largely eschewed the commentary prevalent on blogs. Instead, they overwhelmingly chose to use the platform as a call to civic action, to encourage people to get to the polls and participate.

Indeed, nearly two-thirds of the Twitter commentary examined (64%) filled that function and the majority of that (41%) came with no partisan strings attached.  “Don’t forget to take the time today to vote! If you don’t vote you are not allowed to complain,” tweeted DrTimB. 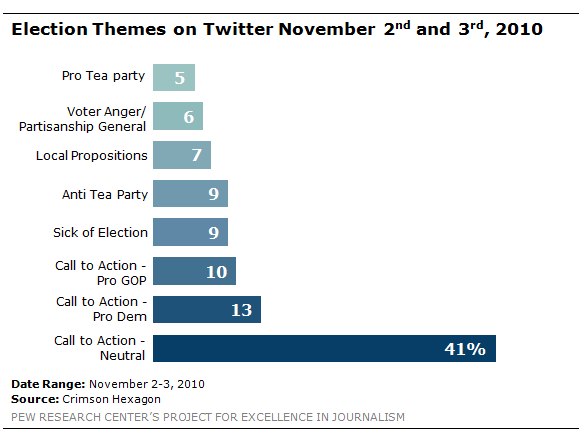 The rest of the tweets were almost equally divided among those who pushed for Democratic votes (13%) and those advocating for the Republicans (10%).

“Today step your tweet game up people and remind others to go out and vote democrat…we can’t allow a republican sweep,” declared NadiaT2.

Of the other themes to emerge on Twitter, one (at 9%) offered a different kind of message than the get-out-and-vote exhortation. In the final weeks of the midterm campaign, a significant portion of the mainstream media coverage, as measured by PEJ’s News Coverage Index, focused on the 2010 races being marked by nasty campaigns, controversial ads and personal attacks by the candidates.

And a significant number of tweets in fact expressed frustration with the tone and tenor of the campaign.

“I am so glad after today it’s over for a while. I am sick of the negativity and in between, the lies, the cheating, voter fraud, etc.,” asserted tweetmeintexas.

Next: About this Study
← Prev Page
Page1Page2Page3Page4You are reading page5Page6
Next Page →