In the blogosphere, there was an even more mixed verdict.

To study blogs, PEJ used technology from Crimson Hexagon, which identifies statistical patterns in the words used to express opinions on different topics.  PEJ used Crimson Hexagon to analyze blog posts on November 2nd and 3rd, 2010 for seven themes relating to the coverage on election night.

The most prominent themes involved the idea of a Republican rout (24% of the conversation measured by Crimson Hexagon involved this idea). Another 18% focused on this as a victory for the Tea Party. But 13% of the conversation suggested this was a more mixed verdict. And 11% of the discussion saw the night as a setback for the Tea Party, noting some of the prominent tea party-backed candidates such as Christine O’Donnell in Delaware and Sharron Angle in Nevada lost, while in Alaska, Joe Miller was threatened by write-in candidate Lisa Murkowski.

And one prominent issue on blogs was something largely absent elsewhere. The idea of widespread voter fraud and election abuse was actually tied for No. 2 as the second largest discussion thread on blogs at 18%. 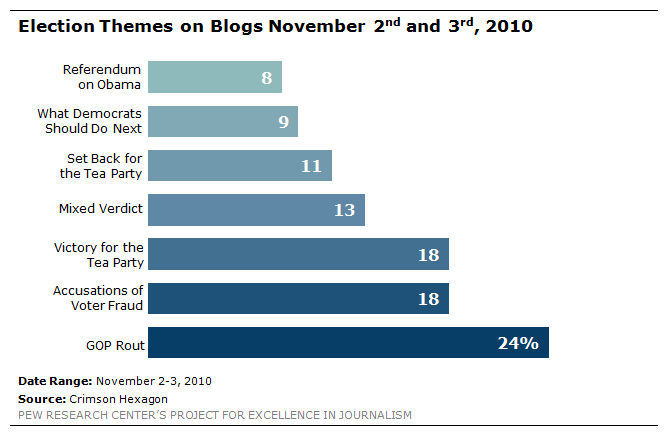 The competing narratives on blogs about the meaning of the results seemed driven by different political viewpoints. “You know it’s going to be a good night for the GOP when the pundits on MSNBC are arguing whether it’s a big win for the Republican Party, or an historic win,” declared Jeff Dunetz on the conservative website Big Government.

“An energized conservative electorate, fueled by the anti-establishment Tea Party movement that emerged in 2009, helped Republicans to what could be the biggest House gain by any major party since 1948,” blogged the Due Myers Journal.

On another side of the spectrum, Shaun Mullen, writing on The Moderate Voice, downplayed the notion that the elections had produced a seismic political shift. “The sun still came up in the East, the San Francisco Giants were still the world champions of baseball and Christine O’Donnell still didn’t have a job,” Mullen declared.

The site Offsprung.com concluded that the Democrats’ ability to hold the senate was “strong supporting evidence of this election not being the huge mandate for a different direction that many right-wing commentators are already declaring it to be.”

Some of this commentary also spilled into concerns about voting fraud. And they came from both sides of the political aisle.
On the site infowars.com, Paul Joseph Watson and Alex Jones called for a “serious investigation into potential vote fraud” in Nevada where “Harry Reid beat Tea Party candidate Sharron Angle by a clear five points despite pre-election polls showing Angle four points ahead.” To have a nine-point swing, the writers contended, “is highly suspicious.”

Combs Spouts Off asserted that “disturbing stories of vote fraud, chicanery and intimidation have come out of North Carolina and numerous other places as well…Democracy in America is under attack by people with the ideology, tactics and goals of Venezuela’s Chavistas.”

A post in Mother Jones magazine declared that, “Early this morning, self-identified tea party activists showed up at a polling station near Benedict College in Columbia, ‘basically harassing students—telling people not to vote and generally making voters feel uncomfortable,’ says Keiana Page, press secretary for the state Democratic Party, who said that the party’s legal team is currently investigating the reported incident at the historically black college.”

On Election Day and in the hours that followed, the blogosphere was rife with debate not only about the meaning of the election, but about its basic fairness as well.

Next: Twitter – a Call to Action
← Prev Page
Page1Page2Page3You are reading page4Page5Page6
Next Page →