If the tea parties were not prominent in newspaper headlines, they were front and center in the television coverage that began on Monday evening and went past midnight. A keyword search of election-related terms culled from the coverage on the three commercial broadcast networks (ABC, NBC and CBS) and the three major cable news outlets (CNN, Fox News Channel and MSNBC) found that the most frequently used term was President Obama. 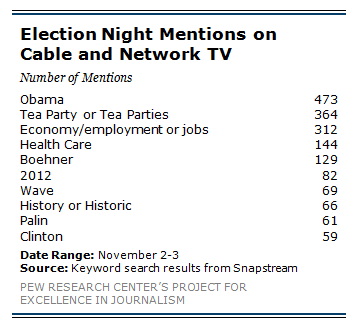 Given the widely accepted thesis that the election was in part a referendum on his tenure, Obama was the most prominently mentioned subject in the television commentary, generating 473 mentions, according to PEJ’s capture of coverage.

But closely behind him, at 364 mentions, was another crucial factor that, according to many on-air commentators, seems to have emerged as a serious force in the American political landscape—the tea parties. The economy and jobs were third (312). Health care was fourth, but it followed significantly behind as an issue of discussion on television (144).

“The volatility overall that we’re seeing [election] cycle to [election] cycle at the moment is captured by the tea party and it’s what has driven Republican turnout,” offered Juan Williams on the Fox News Channel.

On ABC, commentator George Will called the tea party “traditional conservatives with…the social issues stripped away…who trace their lineage back to Barry Goldwater,” adding that “it’s going to be the Republican Party playing catch up” to tea party principles.

While the broadcast networks tend to be somewhat more circumspect than their cable siblings,  the election night TV commentary switched gears from reporting the actual results (and accompanying exit poll data) to trying to interpret them and project their meaning.

On CBS’s coverage, anchor Katie Couric wondered about the future of the recently passed health care reform legislation given the makeup of a new Congress.

“You have many tea party candidates…who believe they have a mandate to do things like repeal health care reform and make government much smaller,” she said. “How is [Obama] going to respond to that?”

One of the most discussed figures on election night was House Minority Leader John Boehner (129 mentions), widely expected to be the new Speaker. And a good deal of the focus was on his leadership style and priorities. NBC Washington bureau chief Mark Whitaker offered that while “Newt Gingrich came on talking about a revolution” after the Republican victory in the 1994 midterms,  “John Boehner is not going to make that kind of mistake. He’s going to go to work very quietly,” and will likely face “a lot of pressure in his caucus” to cut spending and repeal health care reform.

Another prominent subject of the commentary was former Alaska governor Sarah Palin (61 mentions), who campaigned for a number of victorious Republican candidates (as well as some losers) and who is already the subject of considerable speculation about her 2012 plans.

“When you look at some of these Palin wins…” Velshi added, in discussing her endorsements of successful candidates, “some of this may actually come back to help her in 2012.”

Next: Blogs – Commentary and Conspiracies
← Prev Page
Page1Page2You are reading page3Page4Page5Page6
Next Page →