Two stories—one that featured some gloomy news and another with a distinctly more upbeat tone—vied for attention at the top of the news agenda last week.

Driven by disappointing jobs numbers that cast further doubt on the strength of the recovery, the economy narrowly edged out the Gulf oil disaster, where the major news was a successful stanching of the disastrous leak.

The sputtering economy, fueled by a July labor report showing no change in the nation’s unemployment rate, accounted for 12% of the newshole from August 2-8, according to the Pew Research Center’s Project for Excellence in Journalism. That was up modestly from 10% the previous week as coverage of the jobs situation accounted for more than a third of all the economy-related news studied.

Coverage of the Gulf oil disaster made up 11% of the week’s news, with attention focused on the apparent success of the “static kill” measure, which by the week’s end seemed to have permanently stopped the flow. Despite this important development, the spill saga generated its lowest amount of media attention since the week of April 19-25, when the oil rig exploded and the story received 5% of the coverage.

The 2010 mid-term elections followed the Gulf disaster as the No. 3 story. Voters went to the polls for primary elections in several states. But a significant portion of the coverage dwelt on perceived troubles for the Democratic Party, which included everything from House members under investigation to internal bickering. Overall, the story filled 8% of the newshole.

As the No. 4 story for the week, the debate over same-sex marriage made news when a California judge ruled that California’s Proposition 8 banning gay marriage in the state is unconstitutional. That subject accounted for 5% of all the week’s news coverage.

Finally, the national conversation about immigration, which featured continuing fallout from the July 28 federal judge ruling that blocked portions of Arizona’s new law, reached the No. 5 spot for the week, with 4% of all media coverage. 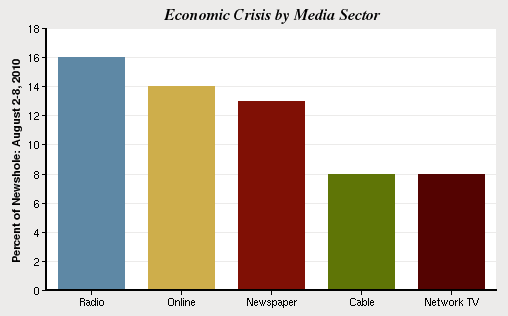 One story that failed to rank among the top five stories was the war in Afghanistan, which had received a boost the week before from the WikiLeaks dissemination of about 90,000 classified war documents. From July 26-August 1, the WikiLeaks story and overall coverage of the war combined to account for 19% of the newshole. But last week, that number fell to only 3%, again suggesting that the nation’s longest war has had difficulty generating major sustained coverage.

The job situation did not improve in July, according to a labor statistics report released on August 6 that showed the unemployment rate staying at 9.5%. That news was widely interpreted by the media and analysts as a sign that the recovery was not progressing as hoped.

A modest rise in private sector employment was not enough to make up for the loss of the numerous temporary workers who had been employed by the 2010 census; in all, employers cut 131,000 jobs in July. Out of all the economic news last week, fully 35% focused on the job situation and the sobering statistics.

A Wall Street Journal story published August 6 on its website emphasized the uncertainty. “After the worst recession in decades, the recovery that began in July 2009 has recently been losing momentum, but it’s hard to say if it’s just a temporary slowdown or if the economy could start to contract again.”

An August 5 story in the Rome News Tribune, a daily newspaper in Georgia, spotlighted the local impact of the tight job market. “Job seekers, take note: The competition at Steak ‘n Shake is fierce,” was the lead for a story about a local franchise that was hiring for its September opening. One manager estimated that he and two colleagues had seen 700 to 800 people, and expected to see hundreds more before the application process was through.

An ABC radio news report helped put the job numbers in context with a comment by MoodysEconomy.com analyst Mark Zandi, explaining why employers are still reluctant to hire:

“It’s hard to remember, but just in early ’09, many businesses were suffering near-death experiences, I mean, very close to bankruptcy. And as a senior manager in these companies you’re just not going to forget that quickly, it’s going to take time to overcome those concerns,” offered Zandi.

Last week, the Gulf spill led two media sectors—network TV and online at 15% and 16% respectively. In newspapers the story ranked at No. 3 with 11% of front-page coverage, and on the radio it was No. 2 at 12%. However, on cable news, a sector that had in the past dedicated large amounts of airtime to the story, it was only the No. 7 story, at 5%.

The vast majority of last week’s Gulf coverage—about three-quarters—focused on the containment and cleanup and impact on the region. It was the week that BP executed a procedure to plug the leaking well once and for all. An August 5 Washingtonpost.com story described it thusly: “On the 107th day of the Deepwater Horizon disaster, the Macondo well became an apparently harmless hole in the seafloor, clogged with 13-pound-per-gallon gunk, and barely more of a threat to spew oil into the Gulf of Mexico than to start gushing lemonade. The ‘static kill’ had worked.”

The arc of media coverage of a disaster that peaked in June continued to plateau last week, consistent with recent coverage. Indeed, in the last six weeks, the story has accounted for 14% of the overall newshole, a significant number, but well off its top levels. And though the static kill procedure appeared by most accounts to have been successful, reporters were not necessarily willing to place a coda on the story altogether last week.

In an August 2 ABC World News broadcast, Diane Sawyer said, “Every sign from the Gulf is that starting as early as tonight, this is it.” But Jeffrey Kaufman, reporting live from the Gulf, was quick to remind viewers of an important caveat. “This really is the beginning of the end, the final chapter of the well itself, but as for what it has left behind in the waters of the Gulf, that is far from clear.”

It is also unclear whether a story that has effectively dominated the news agenda for most of the last three months will finally fade from the media radar screen if the static kill solution continues to work.

The mid-term elections featured prominently in the media last week (8% of the newshole), particularly on the politically oriented cable channels, where it was the No. 1 story at 15% of the airtime.

Almost half of the mid-term coverage focused on the Democratic Party, rendering an image of bickering, scandal and uncertain prospects for November. Representatives Charlie Rangel and Maxine Waters drew media attention for ethics probes against them. A feud between Speaker of the House Nancy Pelosi and White House spokesman Robert Gibbs over Gibbs’ statement that the House was vulnerable to a GOP takeover also made news. President Barack Obama’s campaigning on behalf of Democratic candidates was a prominent theme as well.

“Nearly two years have passed since power was transferred into the hands of the anointed one,” said Hannity in his August 2 broadcast. “When will President Barack Obama be held accountable for his failures?”

On August 4, a federal judge in California ruled that the ban on same-sex marriage was unconstitutional. The topic, which filled 5% of the overall newshole, doesn’t often find itself on the roster of top stories. Last week it got the most coverage (10%) on cable.

Liberal host Rachel Maddow, on her August 5 MSNBC broadcast, noted what seemed to be a curious silence on the part of conservative politicians. “The legal fight goes on—the anti-gay marriage people are filing an appeal. But the political fight over this does not seem to be happening,” observed Maddow.

Also among the top stories of the week was the debate about immigration (4%). The media remained focused on Arizona, after a federal judge on July 28 put a halt to some key aspects of the state’s law designed to crack down on illegal immigration. But other states appeared in news reports too, among them Virginia and Ohio, which are at various stages of implementing their own immigration measures. 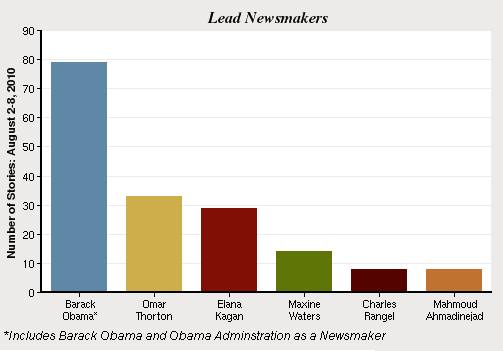 At the top of the list of newsmakers last week, as he usually is, was President Barack Obama, who, along with his administration was a key figure in 8% of all stories—the same level as the previous week. (To be a lead newsmaker, a figure must register in at least 50% of a story.)

At No. 2, registering in 3% of the stories, was Omar Thornton, the man suspected of shooting and killing eight employees of a Connecticut beer bottling plant before turning the gun on himself. Thornton had suggested he was retaliating against what he saw as a racist atmosphere at the plant where he worked, according to news accounts.

Rounding out the top five newsmakers for the week of August 2-8 were Representatives Maxine Waters and Charles Rangel, two Democratic members of Congress facing ethics charges. Each was the focus of 1% of all stories for the week.