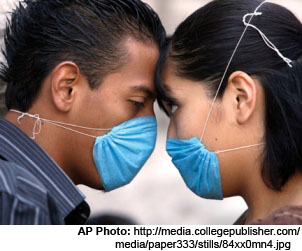 In late April, news of the rapidly spreading “swine flu” swept across the American media as few sudden stories do. As the outbreak jumped from a mysterious respiratory disease in Mexico to the threat of the first global flu pandemic in four decades, the press leapt in. During the week of April 27 – May 3, the flu story, the most covered news event of the week, accounted for almost a third of mainstream media coverage, according to the News Coverage Index of the Pew Research Center’s Project for Excellence in Journalism. That marked only the second time that a health-related story had become the No. 1 story in the American media since the Project began its weekly News Index in January 2007. From tracking the spread of the virus, to analyzing government response, to asking if the story had become sensationalized by the media, the U.S. press examined seemingly every angle of the story.

How did coverage in the U.S. compare to media in other countries, both in the level of coverage and the way it was framed? How did the number of cases reported or the geographic proximity to the epicenter of the outbreak impact coverage? And, did the Spanish-language press in the U.S. treat the outbreak differently than its English-language counterparts?

Among the answers, according to a new study the Project conducted of media in different countries, is that the swine flu story got less coverage in U.S. newspapers than in some other nations’ press, at least in relation to the number of people ill in those countries. The newspaper coverage here also was broader in nature and somewhat less alarmist.

For this analysis, PEJ studied 12 days of front-page newspaper coverage in seven countries around the world (including the U.S.) and the top three Spanish-language papers in the U.S. PEJ examined the period from April 27 through May 10 (Sunday – Friday), when coverage in the United States was at its peak.

Overall, the project found news consumers around the world received varying portrayals of the outbreak, its severity, how it was affecting daily living and even the name of the flu itself. The coverage from these 12 papers revealed noticeable differences in attention, prominence and how the papers chose to frame stories.

Next: U.S.English Language Print
← Prev Page
You are reading page1Page2Page3Page4Page5Page6Page7Page8Page9Page10
Next Page →