Beyond the candidates, what has the general election narrative been about? Did the economy become an all-encompassing story that dictated the race?

The evidence here suggests that is not what happened. The candidates, their character, temperament and their ideas, seemed to be the dominant elements of this drama. The economy was a key factor, but at least in the media accounts, it was the candidates as actors against that backdrop, from their choices of running mates to their body language and demeanor in their face to face encounters, that drove the media narrative.

Across the whole six weeks studied here, the economy does appear at the top of the list. In all, 18% of the campaign newshole studied involved coverage of the economic crisis and the economy generally as they intersected with the campaign. [1]

But that number is rivaled by the coverage of the debates. The four candidate encounters combined filled 17% of the space and time in the media about the campaign. That offers some insight into how significant debates have become in the architecture, if not the outcome, of our general election periods.

Stories that focused in one way or another on Governor Palin’s impact on the race made up the No. 3 campaign topic during these weeks, from explorations of her record, voter reaction to her, to her various interviews. Together, these Palin-related topics accounted for 14% of the newshole studied.

Polls came next, at 6%, closely followed by coverage of the increasingly harsh campaign attacks toward the end of the campaign s attacks at 6%.

A look at the narrative storylines over time offers some added insight into the question of whether the economic crisis really became the story that ate the campaign. It is possible that, despite the famous aphorism posted in Bill Clinton’s campaign headquarters in Arkansas in 1992 that read “It’s the Economy, Stupid” to signify would the race was about, that wasn’t so precisely the case in the eye of the media this year.

Indeed, during the last two weeks studied here, which coincided with the last two presidential debates, first character attacks by both candidates and then the last debate, were the No. 1 campaign topics each week.

In addition to the topics of the news coverage, there is another question—how were these stories framed?

A story involving a presidential debate could focus on what the candidates said, their strategy, who won, or more.

To get at this, the study also examined how stories were put together, or the narrative framing.

As in past reports, horse race coverage predominated. Such accounts, which principally involved tactics, strategy, and polling, accounted for 53% of all the coverage. Closely related political matters, such as examination of advertising, fundraising and political endorsements, which weren’t quite so focused on who was ahead or behind, made up another 10%.

Policy, the second largest category of coverage, accounted for 20%. Coverage of the personal life of candidates filled 5% and examination of public records of the candidates made up 5%. 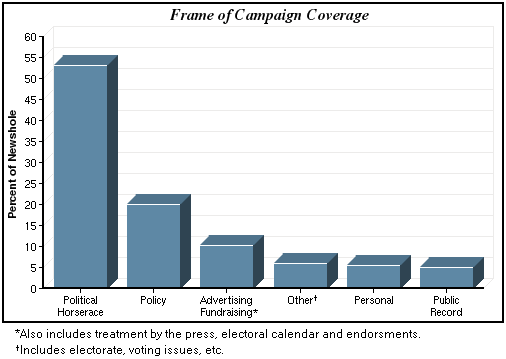 FOOTNOTE:
1. These campaign economic stories are separate from stories about the economy, the rescue plan, Wall Street, stocks, etc., that did not involve the campaign.
Next: Conclusion
← Prev Page
Page1Page2Page3Page4Page5You are reading page6Page7Page8Page9
Next Page →