The Sept. 19 story in the New York Times pretty much summed up the most noteworthy aspect of the coverage of Democratic vice presidential hopeful Joe Biden—how little there was.

“As the economy reels, Senator Joseph R. Biden Jr.—the Other Running Mate— has been absolutely butchering Senator John McCain across the Rust Belt this week,” the story stated. “It is not clear who has noticed.”

From Sept. 8-Oct. 16, there was only one period—the week of the Oct. 2 vice-presidential debate—when Biden generated more than minimal press attention. And in that week, he did quite well in the media narrative, getting twice as much positive overage as negative coverage. 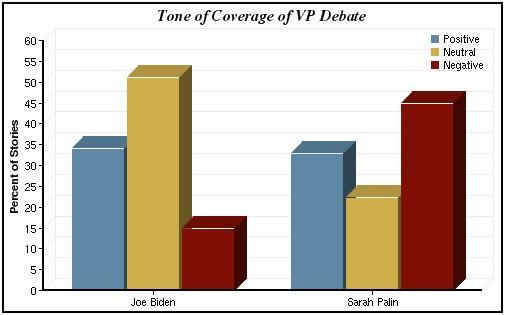 For the rest of the time, however, Biden was practically an afterthought, struggling to generate headlines and attention.

And the tone of this coverage of Biden—outside of those from the week of the vice presidential debate—was more negative than positive by a factor of almost three to one.

When it comes to media attention, vice presidential candidates traditionally stand a significant distance behind the figures at the top of the ticket. But in the 2008 campaign, Biden has also played a distinctly secondary role to his Republican counterpart, Sarah Palin.

In the interval examined in this study, Sept. 8-Oct. 16, Biden was a significant factor in only 9% of the campaign stories, making him, by far, the least covered of the four candidates on both tickets. But even that number for Biden is misleading. In only one of those weeks, the one when he debated Palin, did Biden register in more than 6% of the coverage, or more than a handful of stories.

Biden’s one significant moment under the klieg lights of media attention came from Sept. 29-Oct. 5. That week, Biden was a significant or dominant figure in 31% of the campaign stories studied. Even then, however, he paled by comparison to his GOP rival. Fully 51% of the coverage that same week involved Palin, both for her debate performance and for the response to her interviews with CBS’s Katie Couric.

Leading up to the encounter with Palin—which attracted more viewers (73 million) than any of the three presidential debates—there was anticipation about how the gaffe-prone Biden would do. Most of the debate post-mortems credited him with a strong performance. While the broad consensus among media and the political people they interviewed was that both Biden and Palin had accomplished what they needed to, the quick surveys of debate viewers revealed Biden as the convincing winner.

The tone of Biden’s coverage that week seemed to reflect that—33% of his coverage from Sept. 29-Oct. 5 was positive with 53% neutral and 15% negative. That compared favorably with Palin, who got less positive and far more negative coverage than Biden that week, in part from the Couric interviews. [1]

Other than that one week, however, Biden’s coverage was among the most negative of any candidate studied, more so than Palin’s and close to McCain’s. Excluding the week of the vice presidential debate, 48% of Biden stories carried a clear negative tone. Another 35% were neutral or mixed. Just 17% were positive.

The numbers seem to reinforce the traditional media view of vice presidential candidates. They can do little to help a candidate at the top of the ticket. But they can hurt him. When Biden made news, outside the debate, it was for apparent gaffes or for pungent attacks.

There are several factors that may help explain Biden’s lack of coverage. As someone who has been in the Senate for 35 years and run twice for President—in 1988 and 2008—the Delaware Senator may be viewed as a known quantity to the press and public, one who requires little new media vetting.

That stands in stark contrast with the media’s perspective toward newcomer Palin and efforts to examine her career and resume. And in an era of newsroom cuts at many media outlets, the task of extensively covering both presidential contenders and Palin hopeful may have usurped some of the resources that might have been devoted to Biden. The Sept. 19 New York Times story noted, for example, that he is followed on the campaign trail by “just a few national reporters.”

FOOTNOTE
1. There is further evidence of the connection between Biden’s debate performance and an upbeat media narrative. Of the Biden campaign stories that were primarily about that debate, 34% were positive, 51% were neutral and 15% were negative in tone, numbers that correlate very closely with the overall tone of Biden’s press for that period.