On Sept. 15, with John McCain enjoying a post-Republican convention bounce that had erased Barack Obama’s lead in the polls, the big Wall Street investment firm of Lehman Brothers declared bankruptcy. 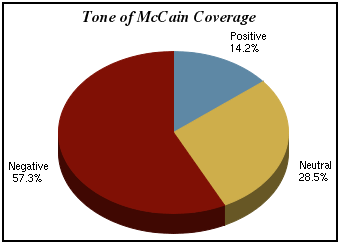 From that point, the U.S. economy quickly plunged into the gravest financial crisis since the Great Depression and the tone of McCain’s media coverage plunged with it. Over the next few weeks, with the economic crisis dominating news and public concern, McCain made several efforts—some of them dramatic—to try and seize the initiative. In doing so, he became a dominant actor in the campaign drama, generating more coverage than any other presidential or vice presidential candidate for the first time in the general election season.

But as McCain did so, the media narrative about him grew increasingly negative. Overall, between Sept. 8 and Oct. 16, only 14% of stories in which McCain was a significant factor were positive, while 57% were negative. The rest, another 29%, were neutral or mixed.

In a sense, the late general election narrative about McCain is not dissimilar to the tone of his coverage early on in the campaign. A PEJ study of coverage from Jan. 1-May 31, 2007, found that the Arizona Senator’s coverage was about four times more negative than positive. Then, too, his coverage was influenced by his lagging in the polls and a campaign that seemed in disarray. Another study in the early primary season (Jan. 1-Mar. 9, 2008) using a different methodology that excluded horse race coverage found McCain’s negative themes outnumbered his positive ones by 57% to 43%.[1] Those negative narratives were largely driven by the perception, during the GOP primary fight, that he was not a reliable conservative.

Since September, one thing McCain did accomplish was reversing what had been a substantial Obama lead in media exposure. For the general election phase overall, they drew remarkably even. McCain was a significant factor in 62% of the campaign stories studied from September 8 through October 16, the same percentage as Obama—largely because of his actions during the early phases of the economic meltdown.

That is quite a contrast from the pre-convention phase. In first 12 weeks of the general election campaign, by contrast, from June 9 through August 31, McCain was a significant figure in 49% of the campaign stories studied, compared with 74% for his Democratic rival. And in every one of those weeks, the Democrat attracted more press attention than the Republican. Obama maintained a lead over McCain the week after the Republican convention as well.

That changed, however, in mid-September with the onset of the economic crisis. From Sept. 15-23, McCain registered as a significant or dominant factor in 66% of the campaign stories compared with 62% for Obama. Between Sept. 24 and 28, when McCain made the bold announcement of suspending his campaigning and called for a delay in the first debate, he racked up an even bigger margin, factoring into 74% of the coverage compared with 56% for Obama.

Winning the competition for headlines was no mean feat. But if McCain did well in the battle for quantity of coverage in this period, he lost the competition when it came to tone. Indeed, more news for McCain was not good news. His efforts at driving the narrative, in effect changing the subject from Obama to himself, proved to be problematic.

Timeline and Trajectory of McCain Coverage

The general election phase following the conventions began well for McCain in the press. In the week after the Republican convention (Sept. 8-14), McCain opened a lead in the election polls, moving out to as much as a 5-point margin in the Gallup tracking survey. With that as the backdrop, 37% of the McCain stories that week were positive, 31% were neutral and 32% were negative. (Obama, by contrast, again fared considerably worse in that period, with twice as many negative stories as positive ones).

But the tenor of McCain’s coverage worsened for him the following week (Sept. 15-23). In the wake of the collapse of Lehman Brothers, the buyout of Merrill Lynch and the bailout of insurance giant AIG, the Bush Administration unveiled an extraordinary $700 billion plan to try and stabilize the credit system and Wall Street. In a single week, coverage of the economy as a percentage of campaign coverage increased tenfold, from 4% to 40%.

The financial turmoil changed the subject of the campaign and “hit the pause button on everybody’s strategy,” in the words of CNN’s John King. One of McCain’s first responses was stating that the “fundamentals of the economy are strong,” a statement Obama pounced on and which McCain’s camp tried to dial back by explaining that he was referring to the American worker.

The exchange hurt McCain badly in the press. From September 15-23, negative stories about McCain outnumbered positive ones by about 3:1. Only 17% of the stories in which he was a significant factor were positive, down by half from the previous week. Suddenly a majority of the stories about McCain (53%) were clearly negative. (The percentage of neutral stories, 30%, was essentially the same as the previous week). 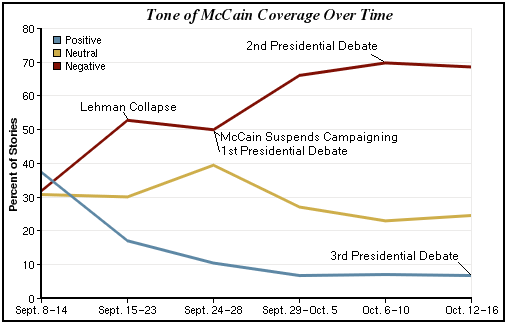 As the crisis deepened from Sept. 24-28, the GOP hopeful made more aggressive attempts to respond, helping to create the most fluid and unpredictable week of the campaign. On Sept. 24, he announced he was suspending campaigning to return to Washington to work on a rescue bill and advocated delaying the first debate, scheduled two days away in Oxford Mississippi. The Washington Post called the moves one of the “biggest…bet[s]…of his political life.” When the Washington meeting failed to yield any immediate breakthroughs, Obama and McCain went ahead with the debate. And some of the coverage depicted McCain’s decision-making in an unflattering light, such as a Sept. 26 CNN.com piece stating that “some fellow lawmakers said McCain hadn’t contributed much to the financial debate, and senior campaign advisors told CNN they believed it was politically crucial that McCain show up in Oxford, Mississippi.”

Once that encounter ended, many pundits scored it a draw and declared that there had been no “knockout.” But a series of snap polls revealed that those watching the debate at home thought Obama had done better, and by a decisive margin. And by now, the election match-up polls showed Obama enlarging his lead over McCain to between five and ten points.

In the news media, that tumultuous week played terribly for McCain, the second bad one in a row. While Obama enjoyed more than a 5:1 ratio of positive to negative coverage that week, McCain’s was the reverse. A mere 11% of his stories were positive while 50% were negative. Another 40% were neutral. McCain’s gamble, as it turned out, proved even more negative in the media portrayal than the one before when he had supposedly made his big gaffe about the economy.

The following week (Sept. 29-Oct. 5), brought more turmoil. The House of Representatives voted down the proposed bailout plan, and the stock market in reaction lost 777 points in a single day. After absorbing that grim news, the campaign narrative began to shift toward the vice presidential candidates’ Oct. 2 debate. 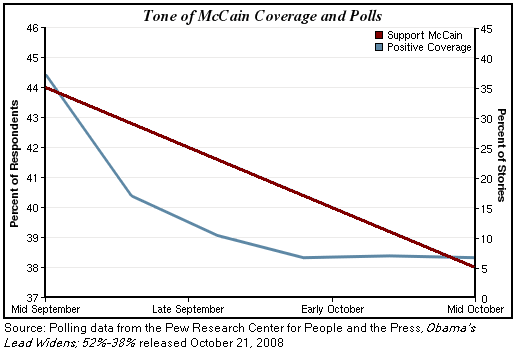 While McCain was hardly the focus of the coverage that week (just 40% of the week’s campaign stories were about him), a good number of those stories suggested strategic weakness in his campaign. Polls showed Obama now solidly ahead nationally and rising in key battleground states, and McCain’s campaign pulled out of Michigan, once viewed as a key battleground.

In the media, McCain’s positive coverage dropped further, to 7%. His negative coverage spiked all the way up to 66% and. 27% of his stories were mixed.

Between Oct. 6-10, as McCain aides acknowledged they were trying to turn the dialogue away from the economy, the rhetoric between the campaigns took a harsher turn. Obama’s coverage became negative, but McCain fared far worse than his rival. Negative stories about him outnumbered positive ones by 10:1 (7% positive compared with 70% negative and 23% neutral). If McCain wanted to change the subject away from the economy, he succeeded, but he did not succeed in getting better press in the process.

The subject changed again during the week of Oct. 12-16, when the two candidates met for their third and final presidential debate—which many pundits viewed as perhaps one of McCain’s last opportunities for an election math “game changer.” Instant polls of viewers showed McCain losing the debate to his rival, and even those who thought he performed well did not suggest he had scored major points against Obama.

In the press, the tone of McCain coverage during the week of the last debate was virtually unchanged from the previous week. Only 7% of his stories were positive in contrast to 69% negative. Another 25% were neutral.

Tone of McCain Coverage by Topic and Storyline

Was this falling depiction of McCain simply a reflection of his slipping in the polls? It is clearly tied to them, but in McCain’s case it made little difference if the story was about policy or strategy.

Certainly McCain did not fare well in the so-called horserace stories—which include polls, strategy and momentum, and made up about six out of ten of all McCain stories. Only 14% of his horserace coverage was positive compared with 25% neutral and 62% negative. In a related category that included stories about political ads, fundraising, and endorsements (another 7% of McCain stories), the Republican hopeful even did a little worse, with 10% positive stories, 24% neutral and 66% negative.

But on the policy side, with the economic crisis as the overwhelming campaign issue, the quality of McCain’s coverage was only slightly more favorable—18% of the policy stories featuring him were positive compared with 46% negative and 36% neutral. (These policy stories made up 27% of all the McCain coverage).

An examination of several specific campaign storylines sheds further light on where McCain’s problems in the press narrative emerged. The most negative coverage came late, actually, when McCain tried to turn from the economy and make more pointed attacks on Obama. Nearly three quarters of the coverage of the negative exchanges between the candidates (74%) were unfavorable for McCain, while only three stories studied, 5%, had a clearly positive tone.

That was even more negative for McCain than his troubled efforts that began earlier with his response to the economic crisis, something that seemed to spark the downward spiral of his campaign in the polls. Of the McCain stories about the general economy and financial meltdown, 55% were negative, compared with 15% positive and 30% neutral. (By contrast, Obama stories were 23% negative and 36% positive). McCain, in short, hurt himself here more than Obama helped himself.

McCain’s efforts to suspend his campaign in response to the crisis, which was the most positive moment of the race for Obama, was not McCain’s worst. Coverage of McCain here was more divided between neutral and negative, though little of it came out favorably. The coverage here was 50% negative, 11% positive, and 39% neutral.

In the end, the trajectory of McCain’s coverage during this heart of the general election phase reflects the convergence of three closely related factors—the exploding economic crisis, some missteps in handling it, and the polls showing Obama moving solidly ahead. Once McCain began to fall behind in the polls, his efforts to change that were viewed from a political perspective. And on this ground, he lost footing.

FOOTNOTE
1. “Character and the Primaries of 2008,” May 29, 2008. This analysis identified, for each of the five main candidates at the time, the most prominent narrative themes in the coverage leading up to the Iowa primary. We found between four and seven narratives, depending on the candidate. We then measured how often that narrative was asserted or refuted in news stories during the primary season itself.