Many observers have suggested the 2008 presidential campaign was the first Internet election, in which campaigns and citizens would make extensive use of the Web for organizing, fund-raising, networking, and announcing news. 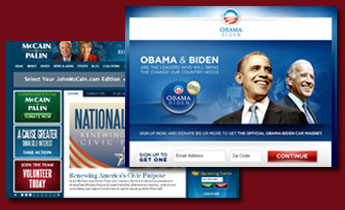 With roughly seven weeks left in the final phase of the campaign, how are the campaigns using the Web? How developed are their Web campaigns? Which candidate has the edge online, and how so?

A new study by the Pew Research Center’s Project for Excellence in Journalism finds both campaigns’ official sites are now quite advanced beyond anything we saw in previous years. For much of the campaign, Obama enjoyed a clear advantage in the new medium. Yet in the last few weeks, much as presidential preference polls have tightened, the McCain campaign has narrowed the gap online, substantially adding features and content since his nomination at the Republican Convention. New features, such as a social networking component, now rivals Obama’s. Nonetheless, entering the last turn in the race, Obama’s online social network of registered users is more than five times larger than McCain’s, according the sites’ own accounting, and his site draws almost three times as many unique visitors each week.

Aside from any differences in design and functionality, the Obama Web site has attracted many more users than McCain’s site. According to Hitwise, an Internet usage research company, the Obama Web site attracted a 72% share of visits to the two presidential Web sites for the week ending August 30, compared to 28% for McCain’s. Those percentages are consistent with the traffic between the two sites since June 28, when Hitwise began measuring usage of the presidential candidate Web sites.

These are among of the findings of a multi-stage study of candidate Web sites in the 2008 presidential campaign. The Project, which is part of the Pew Research Center in Washington, D.C., and is funded by the Pew Charitable Trusts, first audited the campaign Web sites in July 2007 during the early phase of the race. That initial study examined Web sites of the 19 announced presidential candidates. In that analysis, we found highly interactive communities but also some stark differences among the candidate sites, with Democrat Barack Obama’s emerging as one of the most advanced and Republican John McCain’s lagging far behind.

The Project re-examined the McCain and Obama Web sites in August and again September of 2008—before and after the national political conventions—deepening the original examination to include archived speeches, issue position pages, social network activity and new tools of engagement.

Next: Engagement and Participation
← Prev Page
You are reading page1Page2Page3Page4Page5Page6Page7
Next Page →