The media’s coverage of the troubled economy has shifted repeatedly in the last year from a narrative about mortgages to one about recession, a banking crisis and now largely gas prices—a changing storyline and one that differs from medium to medium. 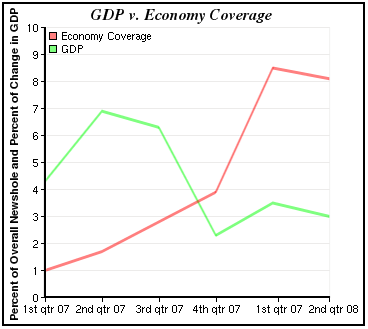 These are some of the findings of a new detailed examination of how the American news media have covered the economic slowdown over the last two years, produced by the Pew Research Center’s Project for Excellence in Journalism.

The economy has been a bigger story in older media—print, the three network evening newscasts and traditional news radio—and a noticeably smaller one in the newer—the more opinion-oriented platforms of cable TV and talk radio.

The relationship between media coverage and public concerns about the economy is a complex one. Going back to late 2007, Americans’ attention to the issue generally outstripped the level of media interest. While the public considers the economy its No. 1 concern, for instance, the media have been far more interested in the presidential campaign—by a factor of nearly 5-to-1 between January 2007 and June 2008. But it’s also true that public attention to the story and pessimism about the state of the economy both grew as the media began to pay more attention in 2008.

The PEJ study is based on an analysis of more than 5,000 economic stories from January 1, 2007, through June 30, 2008, drawn from approximately 1,955 hours of programming on the three major cable news channels, 1369 on network morning and evening TV, 978 on radio, and 469 days’ editions of 21 different newspapers, and the five leading news websites, some 48 different news outlets in all.

Next: The Arc of the Story
← Prev Page
You are reading page1Page2Page3Page4Page5Page6Page7Page8Page9Page10
Next Page →

Tracking the Economic Slowdown
The Arc of the Story How Coverage Tracked with Economic Events The News vs. Public Opinion Media Coverage and Views about the Economy Coverage by Media Sector Conclusion Methodology Topline Topline-Six Months of News Coverage Index Data