Tracking the narratives, one gets a sense of a news industry curious about what is occurring in the economy but with limited handles to grab on to the story. The government data are one handle, though often months behind. Congressional testimony and statements by government officials in press conferences are another. The reaction of the private sector, through the stock market, quarterly earnings reports and the financial health of companies is a third. Yet all of these may tend to leave the media narrative lagging months behind what is going on in people’s lives. To what extent did the press coverage track with what was actually happening in the economy?

The answer to this is complicated. In some instances, the press appears to be months behind economic events. For other kinds of stories, the press is closely sync with what is occurring. The decisive factor appears to relate to how easy a story is to tell.

The broadest metric of the economy is generally Gross Domestic Product (GDP), which is the total market value of all goods and services produced in the country in a given time period. Tracking GDP with press coverage reveals how the media tend to be late in telling the public what is actually occurring in the economy overall.

When the economy began to slow sharply in the fourth quarter of 2007, the press reacted only modestly. The spike in coverage of economic woes came in January, when economists began to anticipate the release of pessimistic GDP data for the quarter. (That report, issued on Jan. 30, found that GDP growth for that period had slowed to 2.3%) By the time coverage of a slowing economy picked up in the first three months of this year, the rate of GDP growth was actually increasing again. That pattern of the coverage lagging behind events—and being largely dependent on official government reports—was manifest again in the second quarter of 2008 when GDP growth slipped again (though the report documenting that would not appear until late July). With the press thinking the economy was picking up again based on the previous GDP report, coverage of the slowing economy subsided as a storyline.
If the press’ relationship to GDP is generally one of being behind events, the pattern of coverage relating to several other key economic indicators—such as the housing market and the Consumer Price Index—is more erratic.

Starting in the second quarter of 2007 the sales of existing homes have been on a steady downturn, an ongoing decrease that has generally continued, with only minor exceptions, through the second quarter of this year. [1] Yet the coverage of the problems plaguing the housing and mortgage markets vacillated wildly in the last year. There were major spikes up in coverage in August 2007, when President Bush unveiled plans to offer federal aid to those defaulting on mortgages, and in December 2007, when Treasury Secretary Henry Paulson introduced the idea of freezing mortgage interest rates to help homeowners. Yet each of those was followed by plunges in the amount of coverage the following month—in September 2007 and January 2008. In September, the overall economy fell in news coverage as the war in Iraq generated greater media attention, and in January, fears of a recession overtook all other economic concerns in the media.

The pattern of up and down coverage of housing was repeated in 2008. In March, coverage of housing picked up again noticeably, the same time that news surfaced of the Bear Stearns buyout after the bank was saddled with so many bad mortgages. It dipped again in May when a cyclone in Myanmar and an earthquake in China generated more coverage than the economy (not including energy prices). Coverage of housing then rose again in June.
The Consumer Price Index, which measures inflation in the economy, has been steadily rising, with one minor downturn, since August 2007. Here, too, coverage has ebbed and flowed—with only one obvious connection to the inflationary trajectory. In March 2008, there was a clear relationship between rising prices and a major spike in coverage. In that month, inflation grew at a rapid rate and rising food prices became a significant concern. Yet on other occasions, the relationship between coverage and rising prices is less clear. A significant jump in inflation during the second quarter of 2008, for example, was met with a general downturn in economic coverage.

The one aspect of the economic crisis in which the media were most in sync with actual events was gas prices. From August 2007 through June 2008, coverage of energy prices almost exactly matched the arc of rising gas costs. And in the rare periods when prices fell, such as December 2007, that was matched with a corresponding drop in coverage of the issue. As the cost of gas soared throughout 2008, the amount of coverage grew at nearly the same rate. 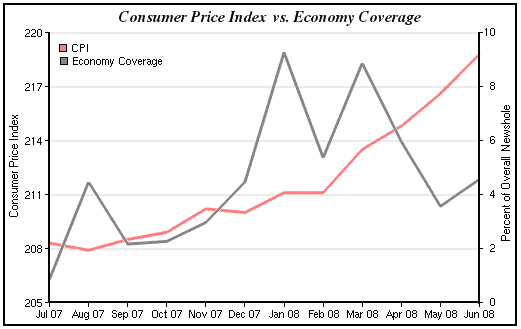 Why was coverage of gas prices so closely tied to actual events? We can only speculate, but some inferences are clear. First, it is easy for the media—or anyone for that matter, even news executives—to be able to monitor gas prices in real time. One need only look at the signs at your local gas station on the way to work. And certain pricing milestones triggered a spike in coverage. That was true in Nov. 2007 when the average cost of a gallon of unleaded regular hit $3 a gallon and again in June 2008 when the price reached the $4 mark.

Not only are gas prices an easy story to spot, they also represent an easy story for the media to tell and perhaps also for the public to understand. There are no confusing sets of conflicting data or complex economic jargon to parse, no indices made up of multiple elements to explain. Instead, “pain at the pump” is easy to illustrate visually and easy to connect to consumers. There are the person-at-the-pump interviews with frustrated drivers and handy visual gimmicks—such as the oil barrel, with its changing price tag, that was a staple of the CNN morning show.

All this, however, suggests that the media tend to cover the economy unevenly. They cover some aspects in real time—gas prices—because they are easy to see and touch consumers in obvious ways. They cover others late, and more abstractly, because those elements are measured in data, and released after the fact. The press, in a sense, is seeing parts of the story, but describing the whole can be elusive.

Next: The News vs. Public Opinion
← Prev Page
Page1Page2You are reading page3Page4Page5Page6Page7Page8Page9Page10
Next Page →

Tracking the Economic Slowdown The Arc of the Story
How Coverage Tracked with Economic Events
The News vs. Public Opinion Media Coverage and Views about the Economy Coverage by Media Sector Conclusion Methodology Topline Topline-Six Months of News Coverage Index Data