The most recent crop of college journalism and communications graduates encountered a flat job market and stagnant salaries, but enjoyed high levels of workplace satisfaction, according to a new report from the University of Georgia. 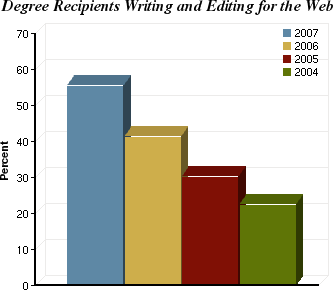 The “Annual Survey of Journalism & Mass Communication Graduates” also provides evidence of the rapidly expanding role of online news. More than half of last year’s graduates working in the communications field say their jobs involve writing or editing for the Web—more than double the percentage back in 2004.

The survey of more than 2,200 students who received either bachelor’s or master’s degrees in journalism and mass communication in 2007 reveals a mixed bag of indicators when it comes to the employment landscape. But given the difficult economic times and uncertainty afflicting much of the news industry, those findings are seen, relatively speaking, as good news.

“The overall picture is, on most indicators, that the market has not changed much from last year. I think that’s kind of surprising,” says report co-author Lee Becker, director of the James M. Cox Center for International Mass Communication Training and Research at the University of Georgia. “At some point, the turmoil at the top [of the media industry] has to affect the graduates…The system is going to become clogged up…The evidence is that it hasn’t happened yet…There are still jobs for them.”

The job picture changed very little from 2006 to 2007. The survey found that by late October, 63.3 % of the 2007 bachelor’s degree recipients had landed full-time work compared with 63.7% the year before. When the field is narrowed to those graduates who looked for work, the 2007 full-time employment number rises to 73.9%, which is virtually the same as the 73.6% figure the previous year. 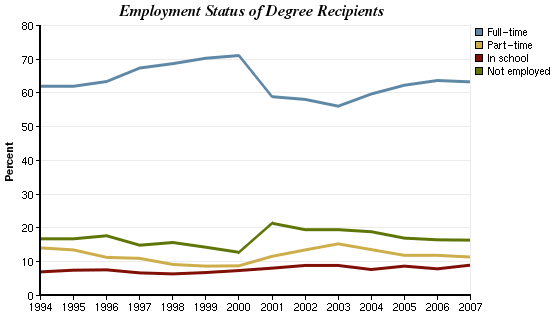 There are, however, some disparities when it comes to who gets the jobs. Continuing a long trend, more female graduates seeking employment (78.5%) found work than male graduates (71.9%). There is a bigger gap between minority and non-minority grads. For 2007, 66.2% of members of racial and ethnic minority groups reported holding full-time jobs compared with 78.7% of non-minority graduates. That gap has grown in the past few years and is the largest in the past two decades.

The survey also found that the median salary for a 2007 bachelor’s degree recipient—$30,000—did not increase over 2006. That’s the first time compensation has remained flat since 2003. Certain media sectors—daily and weekly newspapers, public relations and ad agencies, magazines and especially online publishing—saw salary increases from 2006 to 2007 while paychecks dropped in radio, broadcast television, and cable. Benefit packages, according to the report, “improved just slightly” in 2007. 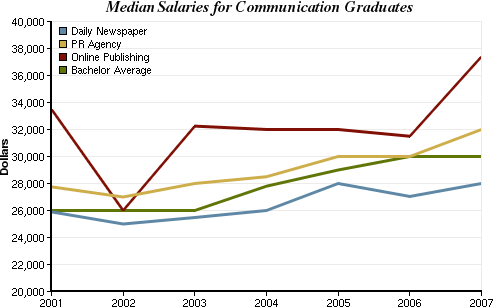 Despite flat wages, workplace satisfaction for 2007 graduates jumped noticeably. The percentage of full-time employees saying they were “very satisfied” with their jobs jumped to 42.1% from 36% in 2006. (That number had been as low as 28.9% in 2001.) That’s the highest level of job satisfaction in 20 years and the report suggests it may reflect some relief at being employed in a “difficult” market.

The report also highlights the increasing emergence of online journalism as part of the job description. More than half—55.6%—of the 2007 bachelor’s degree recipients working in communications say their job has entailed writing or editing for the Web. That reflects a steady and sharp increase, up from 22.6% in 2004.

That trend dovetails with what the survey found out about media usage by the journalism students. Of the 2007 grads, 55% said they had read a newspaper the previous day compared with 60.7% in 2006. (In 1994, that number was as high as 81.7 %.) At the same time, 75.1% of the 2007 students said they went online for news the day before, a number that has grown steadily every year for the past four years. Another 10.3% said they had gotten news via a mobile device in the past 24 hours.

Those numbers seem to reinforce sentiments of one master’s degree recipient in journalism and mass communication who responded to the survey’s request for advice for “those who follow you.”

“Stay on top of technology and embrace it,” he said.