Overall, the coverage of Obama has been far more positive than not. During the height of the primary season, January 1 through March 9, 2008, fully 69% of the prominent personal narratives studied about Obama carried a positive message.

The most prevalent master narrative about the Illinois senator was established early: the idea that he represents hope and change. More than a quarter of all the assertions studied about Obama (28%) projected this idea, What’s more, the attempts by his critics, or skeptical journalists, to suggest that the promise of change was empty or overblown, never got much traction in the press. Only 4% of the assertions studied were rebuttals of the narrative that Obama represented change.

The other most prominent master narrative, though not as strong, was that Obama has a special and rare charisma, someone whose rhetorical skills could move crowds in ways not often seen. In all, 17% of the personal assertions about Obama projected this idea. Here, however, opponents had some luck challenging the message, especially later in the primary season, though not nearly enough to match or neutralize it. Claims that he might have strong rhetoric but with only empty words behind it amounted to 6% of all statements studied about Obama. 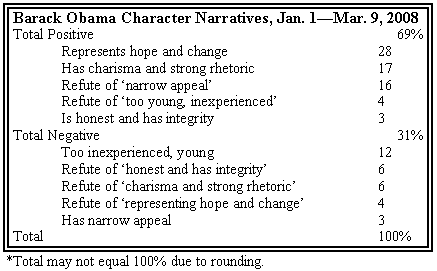 One negative personal narrative that opponents and critics tried to instill about Obama was that he appealed to a narrow range of voters. However, that criticism, which Hillary Clinton has continued to try to press even into May, received only limited coverage. Indeed, to his opponents’ dismay, the rebuttal of that claim—that his appeal is broader than some suggest—more than surpassed the criticism itself, at least until after the Texas and Ohio contests. There were about five times as many assertions refuting the idea that Obama had limited appeal (16%) as making the original accusation (3%).

(This narrative, questioning Obama’s appeal and leadership, may have grown since mid-March, beyond the period studied here. Indeed, a separate examination of campaign topics, detailed below in this report, shows that coverage of issues troubling for Obama gained force in April and May). But during the period when Obama was establishing the record of primary and caucus victories that have made him the apparently prohibitive front-runner, doubts about Obama’s appeal were more than neutralized. They were overwhelmed.

The skeptical narrative that gained the most traction in the press during the period when Obama was racking up his lead in the primaries was about lack of experience. Still, this appeared only half as frequently as the positive trait of representing change and hope, amounting to just 12% of the personal narratives studied.

One positive character thread that the opponents of Obama succeeded in refuting was the idea that Obama was a person of integrity and honesty. That positive trait amounted to just 3% of all assertions, while rebuttals were nearly double that (6%).