Beyond the master narratives about each candidate personally, what was the broader focus of the coverage so far?

To answer this, the study also examined a different set of elements in the campaign coverage, and over a longer period of time. As part of PEJ’s regular Campaign Coverage Index, the study analyzed every campaign story from January through May 18, almost 8,800 stories. Each story was coded for both the topic of the story and which party was the primary subject (Democrats, Republicans, mix of both, or third parties).

The clearest finding is that the coverage has been overwhelmingly about political concerns—tactics, strategy, horse race—as opposed to policy, background or personal issues.

Fully 78% of the stories studied between January 1 and the first week of May 4 have focused on such political matters. By contrast, policy stories made up 7% of the stories, personal matters, 7%, and public record, 2%.

That the horse race focus may be particularly understandable given that there were 84 primaries and caucuses between January 1 and May 4. [1] This might be the time when journalists would most defend horse race coverage. With a contest every few days, the news was the horse race and the voting results.

And indeed this number is higher than during the roughly same period a year earlier, when a PEJ-Shorenstein study from January through May 2007 found that 63% of stories were focused on the politics of the race. During those early days, arguably the horse race was softest, and the polls that helped define it were the least likely to accurately predict actual outcomes.

But 2008 probably also breaks down into two distinct periods, one from January through March, in which the primaries were highly concentrated, and the period after Ohio and Texas, when six weeks went by before the next contest in Pennsylvania. Did the nature of the coverage change along with the pace of the primary schedule? Somewhat, but the difference is not dramatic.

If we break the 2008 race so far into periods, we will see that the horse race coverage was indeed more intense between January 1 and March 9, the end of the week of the Ohio and Texas primaries. During those weeks, fully 83% of all campaign stories studied were about political matters. Policy matters made up 5% of the stories, personal matters 3% and public record 2%.

In the six weeks without a primary leading up to Pennsylvania and the two weeks after that, the coverage did get somewhat less political, but not dramatically so.

Those numbers, incidentally, do not vary by party.

Beyond the focus on politics, however, there were some differences in the way the two parties were covered.

The coverage of the GOP candidates also tended to focus somewhat more on policy differences. Coverage of Democrats focused more on personal differences.

In all, 7% of the stories about the GOP focused on policy, versus 4% for Democrats.

Coverage of personal matters, meanwhile, totaled 5% of the stories studied for Democrats, while such personal coverage amounted to just 2% for the GOP.

The higher level of policy coverage on the GOP side may reflect the fact that the differences among the candidates were more philosophical. The differences between Huckabee and McCain, in other words, were over policy. This reinforces the ideological narrative about McCain, and the extent to which he was or wasn’t really a reliable conservative.

The lack of policy coverage among Democrats, in that sense, may in turn reflect the idea that the main Democratic rivals differ little over policy. Whether Clinton’s health plan would include everyone while Obama’s might not, in many people’s minds, might not be a decisive difference.

But the focus instead on more personal matters may also reflect that the differences between Obama and Clinton often boiled down to matters of personal appeal, background and history.

No Overarching Narrative to the Race

The other major finding beyond the personal narratives of the race comes from looking at what events or themes got the most coverage in the race so far, to see if there is a pattern or basic larger narrative emerging in the coverage.

To do this, the study examined the story-line in each story, the event it was about. If stories about primary and caucus results are eliminated, what we see is that no clear narrative has emerged. The story-line or event that has received the most coverage so far is Obama’s relationship with Rev. Jeremiah Wright, which accounted for 6% of all stories and dwarfed all of the other episodes or storyline of the campaign that didn’t have to do with the horse race itself.

The next biggest story-line is what will happen with superdelegates, which accounted for less than 2% of the stories studied. And that has been followed by Obama’s comments about working-class Americans being bitter about their plight (2% of stories). 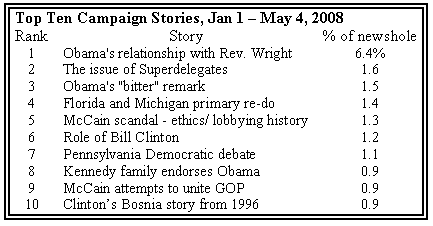 Thus two of the biggest stories of the year have been problems frustrating the Obama camp. This is a much larger percentage of the coverage than anything frustrating either McCain’s or Clinton’s messages.

The biggest problematic story-line for McCain, beyond questions about his conservatism, has been his relationships with lobbyists. This was the fifth-biggest story or event of the year, and it was concentrated largely in one week, when the New York Times tried to focus on concerns among unnamed members of McCain’s staff about a relationship the Senator had with one female lobbyist in particular. The story accounted for 1% of all stories studied.

The biggest story that involved Hillary Clinton in particular concerned the role of former President Bill Clinton in her campaign at 1% of the stories. Next for her was the recollection that she was under sniper fire during a trip to Bosnia in 1996, which made up slightly less than 1% of the stories studied.

Contrary to the idea that Obama’s coverage has been entirely positive, in other words, two of the three biggest story-lines of the year have been negative for him. Perhaps more important is the fact that these stories emerged late in the primary season and the Wright story in particular may not have run its course.