If campaigns for president are in part a battle for control of the master narrative about character, Democrat Barack Obama has not enjoyed a better ride in the press than rival Hillary Clinton, according to a new study of primary coverage by the Pew Research Center’s Project for Excellence in Journalism and the Joan Shorenstein Center on Press, Politics and Public Policy at Harvard University.

From January 1, just before the Iowa caucuses, through March 9, following the Texas and Ohio contests, the height of the primary season, the dominant personal narratives in the media about Obama and Clinton were almost identical in tone, and were both twice as positive as negative, according to the study, which examined the coverage of the candidates’ character, history, leadership and appeal—apart from the electoral results and the tactics of their campaigns. 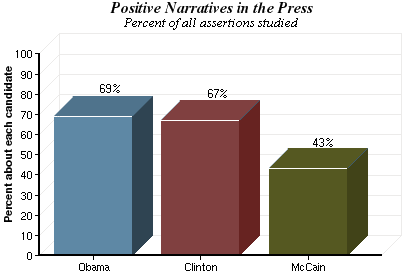 The trajectory of the coverage, however, began to turn against Obama, and did so well before questions surfaced about his pastor Jeremiah Wright. Shortly after Clinton criticized the media for being soft on Obama during a debate, the narrative about him began to turn more skeptical—and indeed became more negative than the coverage of Clinton herself. What’s more, an additional analysis of more general campaign topics suggests the Obama narrative became even more negative later in March, April and May.
On the Republican side, John McCain, the candidate who quickly clinched his party’s nomination, has had a harder time controlling his message in the press. Fully 57% of the narratives studied about him were critical in nature, though a look back through 2007 reveals the storyline about the Republican nominee has steadily improved with time.

Public perceptions of McCain and Obama, a companion survey shows, largely tracked with the tenor of the press coverage’s major narrative themes. With Hillary Clinton, however, the public seemed to have developed opinions about her that ran counter to the media coverage, perhaps based on a pre-existing negative disposition to her that unfolded over the course of the campaign.

These are some of the findings of the study, conducted by PEJ, which is funded by the Pew Charitable Trusts, and the Shorenstein Center, which is part of the Harvard Kennedy School. The study first examined the dominant personal narratives about the candidates in the media during the heat of the primary season. Next, in conjunction with the Pew Research Center for the People & the Press, the study measured how these media portrayals were registering with the public.

The dominant personal narratives for Obama were ones he tried hardest to project, a sign that he largely succeeded in controlling his media message, particularly early on. The most common of all was the notion that he represents hope and change. This was followed by the idea that he is a charismatic leader and powerful communicator. Obama has also succeeded in getting substantial coverage that refutes one of his greatest possible vulnerabilities, the idea that his appeal is too narrow or limited to blacks and elites. These three impressions permeated the coverage of his candidacy.

The most prominent negative theme in the coverage about Obama was the claim that he is inexperienced.

Clinton had just as much success as Obama in projecting one of her most important themes in the media, the idea that she is prepared to lead the country on “Day One.” She has also had substantial success in rebutting the idea that she is difficult to like or is cold or distant, and much of that rebuttal came directly from journalists offering the rebuttal.

The most prominent negative theme about Clinton was the idea that she represents the politics of the past.

For McCain, one master narrative stands out above all in the coverage—that he is not a true or reliable conservative. More than five in 10 of all the assertions studied about McCain conveyed that idea, about six times as many as the number of assertions rebutting it. While this narrative—not conservative enough—might have been a problem for him in the primary race, it is harder to evaluate its implications for the general election. If McCain is seen as a maverick, someone not tied to President Bush, it will likely enhance his standing among independents and moderate swing Democrats. Yet lack of conservative credentials could also dampen turnout among some of the GOP base.

This is the second PEJ-Shorenstein study of candidate coverage in the 2008 presidential campaign and the third presidential election cycle in which a PEJ study has examined what we call the “master narratives” about the candidates’ character: personality, history, leadership, and appeal.

We have found that these master narratives about character, record and personality have a particular influence. The idea that Al Gore tended to lie and exaggerate or that George Bush was a compassionate conservative proved to be enduring messages that shaped how the press covered the 2000 race and possibly influenced the outcome. This does not suggest that journalists are necessarily imposing their own views on the contest. Rather, as they try to decide what is worthy of coverage and give the race coherence, journalists may look for instances that illustrate or validate these master narratives. Events that fit the master narrative become a story. Those that do not may be ignored.

Examining the positive and negative master narratives is also a way to evaluate the tone of media coverage about the candidates, while filtering out judgments that reflect whether a candidate is winning or not. Studying the personal narratives, in other words, rather than the tone of all coverage, gives a better sense of how candidates themselves are being depicted.

In 2000 and 2004, PEJ examined the candidates’ themes driving the general election campaign, after the nominations had been secured. This year, PEJ and the Shorenstein Center began looking earlier, during the first three months of 2007 (and in the case of McCain, throughout 2007) and again in the 2008 primary race. We will continue to follow the narratives of the two nominees into the general election that ensues.

This year’s study identified the most prominent narratives for each of the five main candidates: Barack Obama and Hillary Clinton on the Democratic side and John McCain, Mitt Romney and Mike Huckabee among the Republicans. For each candidate, we identified the most prominent themes in the coverage leading up to the Iowa primary. We found between four and seven narratives, depending on the candidate. We then measured how often that narrative was asserted or refuted in news stories during the primary season itself.

The study captured each personal theme or rebuttal of that theme that appeared in the 46 different news outlets included in PEJ’s Weekly News Index. [1]

We also analyzed the source of each assertion. Was it coming from a voter, the candidate, a campaign surrogate, or the journalist?

The results were then twinned with a companion survey of public attitudes about the candidates by the Pew Research Center for the People and the Press. The survey was conducted twice—February 8-11 and April 18-21—to gauge any shifts in public resonance. The two studies together allow us to explore how much these press messages may be shaping as well as reflecting and reinforcing public opinion of the candidates.

The analysis suggests that both Obama and McCain are heading into the general election battle with less control over their personal messages than they might like. In many ways, the coverage of the campaign has been dominated by a series of small storylines or boomlets of coverage that so far have raised unresolved questions but not yet framed an overall storyline—Obama’s friendships and core ideology, the meaning of his promise of change, McCain’s core ideology, his relationship with lobbyists, and a looming battle, largely quiet during the primaries, over the direction of the conduct of the war in Iraq.

Footnote
1. A total of 5,374 assertions across 23 different themes were identified between January 1 and March 9. For John McCain, the study also examined his major narrative themes throughout all of the 2007, another 199 assertions.

Next: Barack Obama
← Prev Page
You are reading page1Page2Page3Page4Page5Page6Page7Page8Page9Page10
Next Page →