What about the stories that did try to assess the general direction of the war?

The study identified five major narrative threads that related to the conditions in the country or the impact of U.S. policy there: the effectiveness of U.S. policy in action (including the surge); troop morale; the stability of the Iraqi government; the stability of Iraq as a nation; the Iraqi people’s views of the U.S. presence. For each of these, the study also determined whether these stories offered mixed assessments, optimistic or pessimistic.

The thread that generated the most coverage (14% of the all the stories studied) assessed the effectiveness of U.S. policy, and these stories tended to be neither distinctly positive nor negative in their evaluation. Four in ten were mixed or balanced, a third were pessimistic and a quarter were optimistic. This was the only one of the themes where mixed assessments outweighed dour. 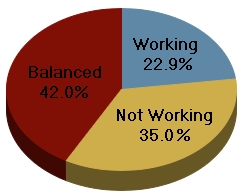 Many of the stories assessing U.S. policy were also longer, more detailed accounts. Indeed, they represented 23% of the overall newshole studied, a much larger percentage than the number of stories they accounted for. This was the only one of the threads where the accounting by newshole differed noticeably from measuring it by story.

Often these assessments could be quite layered and come from multiple sources. A Los Angeles Times story from August 22, for example, noted that “With the district locked down, life has started to return to the streets.” Yet a few sentences later, the piece added,“But U.S. soldiers say they fear progress could quickly be reversed if their numbers are reduced.” And a few paragraphs following, an Iraqi seemed far less sanguine. “He invited journalists into his bullet-pocked home on condition that his name not be published …‘The Americans are trying, but sometimes they are not here,’ he said. ‘It is hopeless.’”

Is Iraq Becoming More Stable?
Percent of Stories Assessing the Stability of Iraq 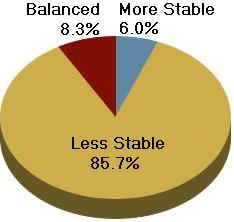 The next biggest group (8% of stories studied or 84 stories in all) assessed the stability of the country generally, and most of them were pessimistic. Nearly nine out of ten of them (86%) conveyed a dour message about the country’s direction. “I’d never go back … It is a city of ghosts. The only people left there are terrorists,” a 26-year-old refugee told the New York Times in an August 24 account. Just five of these 84 stories suggested any movement toward stability, and seven of them offered a mixed assessment.Often these evaluations about the Iraqi national stability came from officials or experts that journalists consulted to put things into context. “Things keep getting worse: you have 4,000 to 5,000 Iraq civilians a month getting killed,” Brookings Institution analyst Michael O’Hanlon, who was doing statistical analysis of the violence, told NPR’s Morning Edition in February.

And Iraqi citizens were another source for the sense that the country was unstable. After a cafeteria in the Iraqi Parliament was bombed, for example, CNN video correspondent Arwa Damon reported that, “Iraqis we spoke to following these attacks simply said that they were frustrated and saddened—one woman saying that this was proof that no one was safe and a clear indication that a government that is powerless to save itself is powerless to save its’ people.” 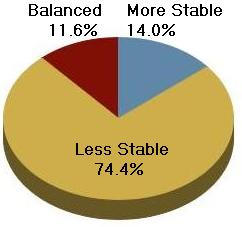 And 4% of the stories studied (43 in all) related to the stability of the Iraqi government led by Prime Minister Nuri Kamal al-Maliki. These tended to be negative as well. About three-quarters of these accounts (32 stories) described an unstable, incapable government while just six of these 43 stories suggested growing stability and five offered a mixed assessment.The last two threads, U.S. troop morale and the Iraqi view of the U.S. presence, each accounted for about 1% of all stories studied. (14 stories on each.) Coverage for both tended to be pessimistic, but the numbers here are too small to reveal much.

Next: Coverage over Time
← Prev Page
Page3Page4You are reading page5Page6Page7Page8Page9Page10Page11Page12Page13
Next Page →

The Portrait from Iraq - How the Press Has Covered Events on the Ground About the Study A Picture of Violence and Chaos Continuing Violence
Themes About Where the Country Was Headed
Coverage over Time Changing Public Opinion November: A Surge for the Surge? The Question of Bias Events Inside Iraq, The News Is Still About Us A Wide Range of Stakeholders Methodology Topline