The coverage of the war from Iraq also changed measurably over the 10 months studied here.To begin with, the amount of coverage of events on the ground in Iraq overall declined in late summer and early fall. From January through June, coverage from Iraq made up 8% of all the stories (and 7% of the newshole) in the Project’s ongoing index of news coverage. [1] From July through September, coverage from Iraq made up 5% of the stories (representing 5% of the newshole). The numbers spiked back up in October to 7% of all stories. 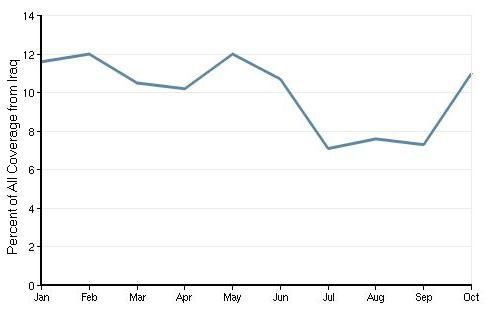 The coverage was highest in February and then again in May. It was lowest during these 10 months in July at 5%. Ground event stories picked up again in October, much of which focused on the controversy involving the role of the private contracting firm Blackwater in the shooting the Iraqi civilians. [2]

A major factor in that drop was a decline in the amount of coverage of daily violence. Through June, 51% of all the stories focused on the issue of continuing violence. From July through October, that number fell to 38%.

Still, as accounts of continuing violence decreased, at least one other theme that suggested problems gained some greater prominence. In September and beyond, for instance, the controversy over the private security firm Blackwater and its involvement in the shooting death of Iraqi civilians became a major subject of the coverage. 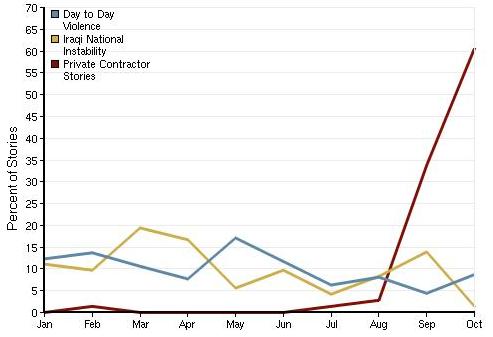 The theme of Iraq’s instability bounced up and down over the ten months. It made up more of the coverage in March and April, declined in the summer, and rose again in August and September as violence decreased. Finally, it all but disappeared in the stories sampled in October.

What about assessments of the U.S. policy? The tenor of the stories examined also fluctuated. The coverage began the year mostly mixed, became more pessimistic in April through June, more positive in July and August, and then dipped again in September.

1. Talk radio and brief radio headlines normally included in PEJ’s News Coverage Index were not part of this study.

2. Data from the full NCI show a similar decline. The Iraq ground war averaged 7% of the entire newshole from January through June. It then fell to an average of 5% for July through September and climbed back up to 7% in October.

The Portrait from Iraq - How the Press Has Covered Events on the Ground About the Study A Picture of Violence and Chaos Continuing Violence Themes About Where the Country Was Headed
Coverage over Time
Changing Public Opinion November: A Surge for the Surge? The Question of Bias Events Inside Iraq, The News Is Still About Us A Wide Range of Stakeholders Methodology Topline