The storylines that dominated discussions of network news so far in 2007 are the rise of the ABC’s World News Tonight led by Charles Gibson to the No. 1 position, overtaking Brian Williams on NBC, and the ratings difficulties of the program led by Katie Couric on CBS. Couric’s CBS Evening News had its lowest ratings in the 20 years since Nielsen Media introduced People Meters.

Despite this changing of the guard in evening news, the Index data show that in terms of the topics they cover the three programs are remarkably similar.

They were identical, for instance, in the top four stories they devoted the most time to in the first quarter of the year—and nearly so in the percent of time dedicated to each. All three, as an example, spent about a quarter of their airtime on the Iraq war (ABC 27%, CBS 24%, and NBC 26%).

Indeed, the only story in the top seven topics this year in which the three programs differ is that NBC Evening News has devoted 3% of its time to the aftermath of Katrina, a subject it has made a special franchise.

The remarkable similarities also extend to the choice of lead stories on each night. All three shows lead more with stories about the Iraq policy debate than any other story, followed by events on the ground in Iraq, severe weather the week of January 14, and the fired U.S. attorney scandal.

Over the 65 weekdays in the first three months of the year, all three programs had the same lead story 45% of the time.

Anchor Charles Gibson has made a point recently in interviews of noting that he has tried not to over-cover the presidential campaign. “I love politics and I’m not engaged,” he told the Washington Post on May 17. By the numbers, however, all three network evening newscasts treated the campaign at the same level—ABC 5%, CBS 4%, and NBC 5%.

If viewers are sensing differences among these three programs, in other words, it is in how these stories or put together, or the tone and style of presentation of the anchor. The differences between these shows are not in their basic news agenda—that is, the topics they choose to cover and how much time they devote to those topics. 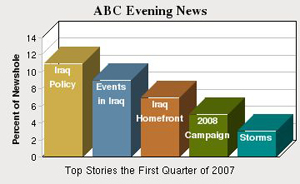 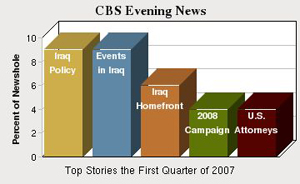 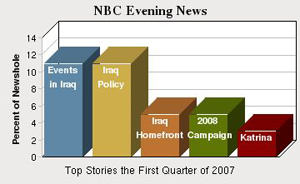 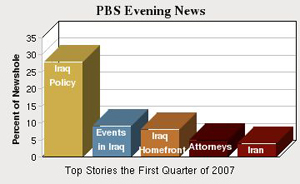 The one evening show that is demonstrably different is on PBS. The first half hour of the News Hour with Jim Lehrer includes a daily news summary as well as a fuller report of the top two or three stories. As an example, the NewsHour devoted more of its newshole to the debate about U.S. policy toward Iraq (28% vs. 10% on the three commercial newscasts) and only 40% as much attention to the 2008 elections (2% and eighth in prominence vs. 5% and fourth). As a result, the coverage also had more of an international focus than did coverage on the commercial newscasts. We do need to note, though, that this is based on the first 30 minutes of the hour-long newscast, a time frame that makes it analogous to the commercial programs but misses what might come in the second half hour.

The bigger difference in commercial network news comes not between networks but in daypart. The network morning newscasts are softer in nature—even in the hard news first 30 minutes studied in our Index.

Another twist is that when the morning shows cover Washington, it is the campaign they are mostly talking about. Campaign and elections, namely the presidential campaign at this point, made up 15% of the time on the morning shows, twice the 7% it made up of the evening.

Domestic social issues, on the other hand, made up 7% of the morning time, compared with 20% on the evening programs on the same networks.

Another finding worth noting suggests some kinship—in format at least—between NBC and its cable sibling, MSNBC. More than 30% of NBC’s airtime was spent on the top two stories—the Iraq policy debate and the campaign.