In the first three months of 2007, the war in Iraq took center stage in the national media with President Bush calling for a troop surge and presidential candidates staking out their positions on the affair. 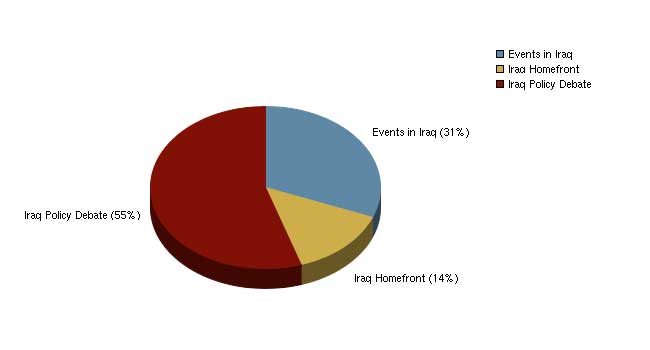 That coverage, despite the time, space and resources devoted to the topic, was rather narrowly focused. Through the first 90 days of the year, indeed, it would be fair to say that this was not coverage of the war in Iraq per se, but the fate of Americans and American policy there.

Overall, more than eight in ten stories were largely focused on Americans—either at home, in combat or through the policy debate. Fewer than one in six—or about 16% of the Iraq coverage—was focused on Iraqis.

Breaking the coverage into three different storylines—the U.S. policy debate, events inside Iraq and war-related issues back home—helps pinpoint the media’s focus. The majority of the Iraq coverage (55%), dealt with the policy debate back in Washington. Thus most of what people are seeing is not about the war itself but the argument about what to do about it.

Less than a third of the Iraq coverage (31%) was about events on the ground in Iraq—which encompasses such subjects as the continuing bloodshed, the insurgents’ development of chlorine bombs, the political situation there, reconstruction efforts, the decision over whether to send England’s Prince Harry to the war zone, and the U.S. security crackdown in Baghdad.

Iraq Events on the Ground
Specific Storylines across All Media

Yet looking more closely at the ground coverage reveals that even most of this focused on Americans—not Iraqis. What constituted that 31%? Half of it (50%) was about American combat and casualties there and roughly 0.5% was about U.S. soldiers committing crimes.

In contrast, just 7% was about Iraqi civilian casualties and 5% concerned Iraq internal affairs—the state of the country itself, the stability of the government, whether the country was in civil war, and other matters that might answer what would happen if Americans pulled out or what other strategy might best serve that nation.

Reconstruction efforts were even harder to learn about, garnering just 1% of all Iraq coverage. Despite what appears to be a mass movement of Iraqis, both exiting from the country and relocating within its borders, less than half of one percent—just 16 stories in all—focused on Iraqi refugees. According to the estimates by the Office of the United Nations High Commissioner for Refugees, as many as 2 million of the country’s population of about 27 million have left for other countries while 1.9 million Iraqis have been displaced within their own country.

One factor that may explain the emphasis on the policy debate is that the political story is easier—and also less expensive—to cover. It is also a domestic story, rather than one about a faraway place, which journalists may think makes it more interesting.

The domestic policy debate is in any case no doubt safer to cover than the war itself. The Committee to Protect Journalists says that since the onset of the war in Iraq in 2003, 102 journalists and 39 media support workers have been killed in the line of duty. That makes it the deadliest conflict for reporters in the organization’s 25-year history.

The third main area of Iraq coverage is the homefront, which includes all aspects of the effects of the war here in the states—military returning home from duty, hospital treatment for wounded soldiers, how families and communities cope as loved ones are sent abroad and economic reverberations, to name a few. More than 1.6 million servicemen and women have served in Iraq and Afghanistan, according to the National Veterans Foundation. And the impact of their tours of duty can be widespread. One study in the New England Journal of Medicine suggested that 15 to 17 percent of Iraq vets were suffering from Post-Traumatic Stress Disorder (PTSD), a serious condition that impacts them and the people around them.

In all, 14% of the Iraq coverage (3% of all media coverage) concerned the homefront. About half of that related to one particular issue—substandard conditions at Walter Reed Hospital or other Veterans Affairs hospitals. The Washington Post initiated the attention in February with a two-day investigative report on the conditions at the hospital. As awareness mounted, everyone from Defense Secretary Robert Gates to President Bush vowed to remedy the situation at the hospital, and several Army officials lost their jobs. Many with direct contact with the hospital, however, said conditions at Walter Reed have been sub-standard for decades. In any case, the attention did little to spark additional investigations into other military institutions or problems soldiers confront back home.

The War Week to Week

The devotion to the war remained fairly consistent across time staying somewhere between 18% and 25% of the newshole most weeks. One week, though, coverage was nearly double the average. The week of January 7-12—when President Bush announced his troop surge—coverage soared to 41%.

From then on, the question of troop strength remained the major subject discussed about the war. Debate surrounding added deployments or withdrawals accounted for 33% of all the Iraq policy debate stories.

That overarching narrative about what American policy should be in Iraq played out through a succession of new events. The confirmation of Lt. General David Petreaus as top Iraqi commander, the announcement that Britain would begin a troop withdrawal, and the continuing legislative skirmishing over the war all shaped the course of the debate and drove media interest in the subject. But the basic story line was the same: Democrats took over Congress with what they believed was a mandate to change Iraq policy and get America out. The president believed it was best to continue on the path of growing, not shrinking, U.S. troop involvement.

In February and March, a related but competing story line emerged: the prospect of war with Iran. The president appeared to threaten possible military action against Tehran in his January 10 surge speech, but the subject did not gain any real press attention until a month later when a U.S. military briefer accused the Iranian government of providing weapons that were killing U.S. troops in Iraq.

The administration later backed off that somewhat, but the press had already focused its radar. In an interview with Iranian President Mahmoud Ahmadinejad, ABC’s Diane Sawyer bluntly asked him: “Do you personally fear an invasion or an attack by the United States?”

By the end of the first 90 days of the year, Iran had become the fifth biggest news story overall in the first quarter of 2007.

Did the attention to Iraq differ from one medium to the next? Not much. Iraq was the top story in every media sector studied.

There were, though, some variations in degree. Network Evening News gave the war the greatest airtime (26% on the three commercial networks and 45% on PBS’s News Hour). Newspapers devoted the least—18% of their front-page reporting—which reflected the fact that papers in the sample tended to cover a wider range of topics on their front pages than network and cable TV did in their entire newscasts.

Some media were also more focused on the policy debate in particular than others. Despite potentially dramatic video of wounded soldiers, the broadcast media placed the heaviest emphasis on the political debates in Washington. Cable, network evening and morning programs and radio news all gave the Washington debates more than twice the percent of airtime of other Iraq stories.

Of the 224 hours of cable news studied over the quarter, about 35 hours, or 16% of the airtime, was spent on the policy debate. This was more than triple that spent on ground events in Iraq (5%) and seven times that of homefront issues (2%).

Next: The 2008 Elections
← Prev Page
Page1You are reading page2Page3Page4Page5Page6Page7Page8Page9Page10
Next Page →