The opening game of the St. Louis Cardinals-Detroit Tiger series, played on the night of Oct. 21, earned only an 8 rating. Sunday’s second game numbers were markedly better at 11.5, but together the two nights averaged only a 9.75 rating. That wouldn’t even rank it in the top 10 broadcast shows for the week of October 9 -15 (the latest available). By comparison the ratings leader for that week, Grey’s Anatomy, scored a 14 rating. (Each ratings point is worth approximately 1.1 million households.) 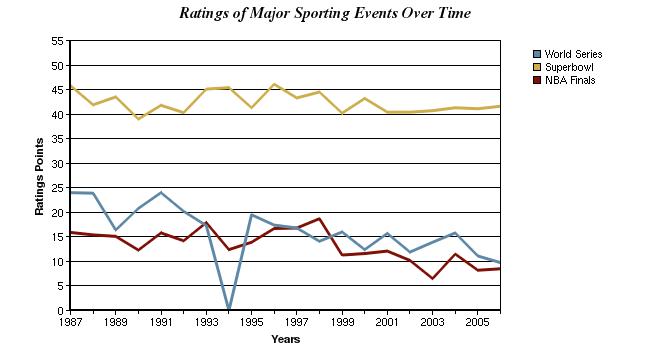 Source: Nielsen Ratings culled from online sources Note: There was no World Series in 1994 due to a players strike.

If that 9.75 figure holds or drops further, it would mark the first time the World Series registered an average rating in the single digits. It would also be more than a point below last year’s average of 11.1, which set the record for the lowest rated series to date. On the other hand, there are a few reasons to believe that the rest of this matchup may attract more eyeballs.

The split of games one and two between the Cardinals and Tigers, with each team winning one, means that for the first time in three years the World Series won’t be a sweep for one team. TV analysts believe that the longer the series goes, the higher the ratings climb as fans increasingly tune in to a competitive event. The debate over whether Tigers pitcher Kenny Rogers used a foreign substance on his hand in Game 2 has also generated considerable buzz. And it’s possible those opening game ratings woes had something to do with the contest coming on a Saturday night and featuring two teams without large national followings.

Whatever happens from here on out, however, the decline of the World Series TV audience is impossible to discount. Two decades ago the Fall Classic averaged about half the Super bowl’s ratings, now it registers about a quarter. If there is a bright spot for baseball it is that the World Series still regularly averages more viewers than the NBA Finals — an event that has also seen a ratings decline in recent years as the league struggles to regain the luster of the Larry Bird-Magic Johnson and then Michael Jordan eras.