It has the makings of one heck of a high-stakes legal donnybrook, featuring a world famous Harvard professor as the plaintiff, the prestigious New Yorker magazine as the defendant, and an esoteric branch of mathematics as the core issue.

Exhibit A is a 10,000-word Aug. 28 New Yorker piece, co-written by Sylvia Nasar and David Gruber, that described the skirmish in math circles over assigning credit for solving the mind-boggling “Poincare Conjecture” problem. On Sept. 18, Boston attorney Howard Cooper wrote to the magazine warning that the article included “false and defamatory content” about his client, renowned Harvard mathematics professor Dr. Shing-Tung Yau.

Cooper has become a much sought-after plaintiffs’ attorney following his long shot $2 million libel victory over the Boston Herald in 2005. His letter to the New Yorker contended that the article improperly portrayed Yau as seeking undeserved credit for the Poincare achievement. In an interview, Cooper described it as “a tabloid-esque story about the mathematics community that does not match with reality.”

For its part, the New Yorker characterized the story as “the product of more than four months of thorough, careful reporting and meticulous fact-checking,” adding that “contrary to Dr. Yau’s assertions, the article is nuanced and fair, and was prepared using ethical standards of journalism.” At this point, Yau is demanding a prominently placed apology and a retraction from the New Yorker. If agreement cannot be reached, Cooper says a libel suit is definitely an option.

If this dispute does result in a libel action against the magazine, it would fit the basic pattern of litigation involving media. A new report issued last month by the Media Law Resource Center found that libel remains the most likely legal challenge to the media defendants.The study, which examined 397 complaints filed against the media in 2005 found that a solid majority (61%) were libel claims. Another roughly one-third involved invasion of privacy charges. About one in five (18.4%) involved contractual claims. (More than a third of the cases included libel and other claims in the same suit.)

Print publishers were the most common defendants, according to the study, cited in 53.7% of the complaints. They were followed by radio and television broadcasters at 43.1%. Internet publishers lagged far behind, named only .8 % of the time.

Most Common Defendants in Complaints Filed against the Media 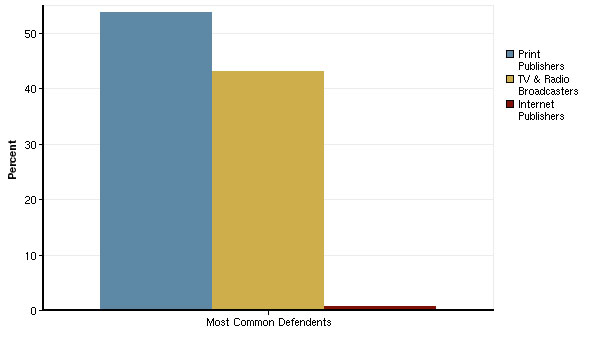 Who was bringing all these lawsuits? Corporations were the most likely source, filing as plaintiffs in 19.6 % of the media related litigation, followed closely by government officials at 18.6%. Lawyers and criminal defendants were next, 15.1%

Most Common Plaintiffs in Complaints Filed against the Media 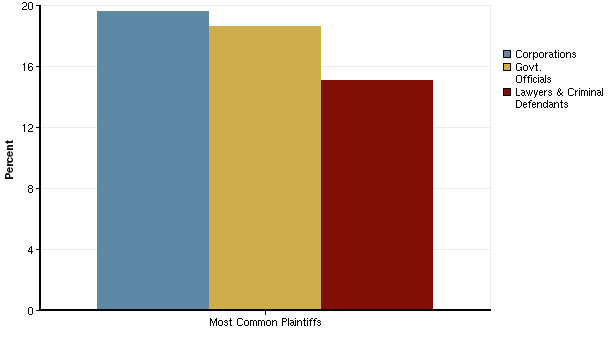 Sandra Baron, executive director of the Media Law Resource Center, says libel suits have traditionally accounted for more than 60% of all the civil claims filed against the media. But in this era when other legal issues such as reporters’ privilege and copyright infringement have also come to the fore, she is somewhat surprised at libel’s continuing dominance of the litigation landscape.

“The thing that has been the most interesting is the degree to which the complaints allege libel, “she says. Even though lawyers often complain that libel laws favor the media, “Libel is the one that [emerges] time and time again as the winner.” So what do the numbers suggest about whether the Harvard professor might prevail, if he were to file a lawsuit against the New Yorker? The vast majority don’t finish the trial phase. But among those that did, for those keeping score at home, media defendants batted .500 in the courtroom last year. The center reported that they won seven and lost seven civil trials in 2005.