The advent of new communications and information media – the book, the printing press, the telegraph, the radio, the television, the computer – are reliably accompanied by apprehensions about how to handle the flow of information. The ancients worried that the book would supplant the oral tradition of exchanging information and ideas among the elite. The printing press brought worry over the quality of written materials as more were produced more easily – and perhaps by those with less important things to say.

In a mid-twentieth century world more connected by mass media, the proliferation of knowledge, it was feared, would overwhelm experts trying to keep up with developments in their fields. One proposed solution to organize all this information was the “memex” or, to use the term that caught on, the connected computer.

New digital tools seem only to have exacerbated worries about information overload, not soothe them. By the early 2000s, experts were already bemoaning how the volume of digitally driven information could undercut personal productivity, undermine social ties and foster distraction. The anxious social critic feared that constant flow of digital messages would result in shallow connections among people but not meaningful conversations. It might also create anxiety among people who fear they cannot keep up with information demands. In the workplace, these demands would create stress for workers and also inhibit creativity.

Notwithstanding these worries, there is a potential upside to the vast and rapid flow of information in society. The optimists noted that people’s abilities to access information online can open new doors to knowledge, facilitate connections with friends and make all sorts of transactions more convenient. Those hoping for the best argued that in conjunction with effective use of filters, new tools to access information – smartphones, tablets and other computing devices – may help navigate the information landscape in ways that are satisfying and empowering. 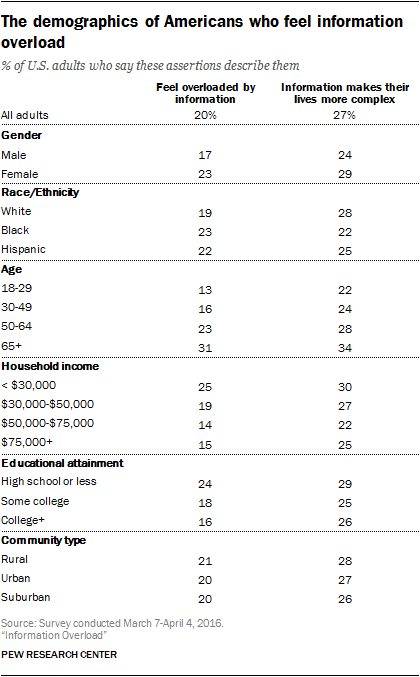 There are clear patterns in the types of Americans who feel overloaded by information, but in no major demographic group do more than a third say they are overwhelmed. Those whose annual household incomes are $30,000 or less are somewhat more likely to say they feel overloaded by information: 25% do, compared to 15% of those living in households whose annual incomes exceed $75,000. There are small differences, too, when it comes to educational attainment: 24% of those with high school diplomas or less feel information overload, compared with 16% of college graduates. The sentiment is also most prominent among senior citizens: 31% of those ages 65 and older feel information overload, while just 13% of those ages 18 to 29 report that.

Next: 2. People generally feel good about their abilities to deal with information, but stresses are real for some Americans
← Prev Page
Page1You are reading page2Page3Page4Page5Page6
Next Page →

Information Overload
1. Worries about information overload are not widespread
2. People generally feel good about their abilities to deal with information, but stresses are real for some Americans 3. The ‘gadget poor’ feel the stresses of information more than the ‘gadget rich’ Acknowledgments Methodology