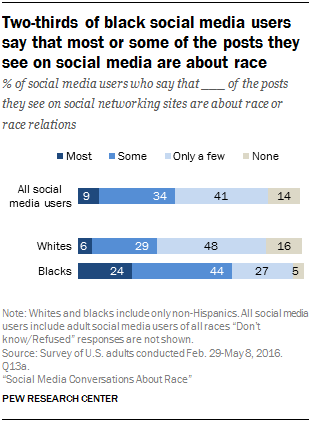 Americans are increasingly turning to social media for news and political information and to encourage others to get involved with a cause or movement. Social media also can serve as an important venue where groups with common interests come together to share ideas and information. And at times, Twitter, Facebook and other social media sites can help users bring greater attention to issues through their collective voice.

In recent years, these platforms have provided new arenas for national conversations about race and racial inequality. Some researchers and activists credit social media – in particular, Black Twitter – with propelling racially focused issues to greater national attention. In fact, two of the most used hashtags around social causes in Twitter history focus on race and criminal justice: #Ferguson and #BlackLivesMatter. In addition to social and political issues, social media also serve as places where conversations about race intersect with a number of issues, including pop culture, sports and everyday personal experiences.

A new Pew Research Center survey finds significant differences in the way black and white adults use social media to share and interact with race-related content1 And a Pew Research Center analysis of tweets reveals that key news events – from Baltimore, to Charleston, South Carolina, to Dallas – often serve as a catalyst for social media conversations about race.

Black social media users (68%) are roughly twice as likely as whites (35%) to say that at least some of the posts they see on social networking sites are about race or race relations. When it comes to their own postings, a similar racial gap exists. Among black social media users, 28% say most or some of what they post is about race or race relations; 8% of whites say the same. On the other hand, roughly two-thirds (67%) of whites who use social media say that none of things they post or share pertain to race. 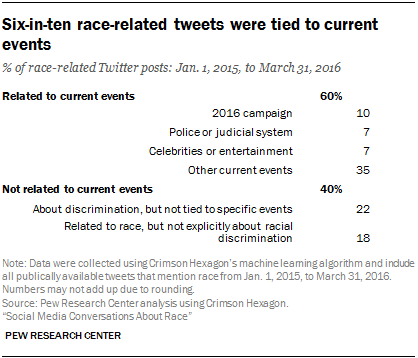 In addition to the survey data, Pew Research Center conducted three content analysis case studies using publically available tweets. The first analysis found that over a 15-month period (from Jan. 1, 2015, through March 31, 2016) there were about 995 million tweets about race – or, on average, 2.1 million tweets per day on the subject. By contrast, about 500 million tweets in total were posted on Twitter each day in 2015, meaning that tweets mentioning race made up about 0.04% of all tweets posted.

Of the tweets about race, a majority (60%) were directly related to news events, like the church shooting in Charleston, South Carolina, or the Grammy performance of rapper Kendrick Lamar2

The second case study focuses on the use of the hashtag #BlackLivesMatter – which predated the Black Lives Matter organization. The hashtag has been used approximately 12 million times from July 12, 2013, through March 31, 2016, and during this period, it was used more often in support of the movement than in opposition to it. Roughly 40% of the times #BlackLivesMatter was used, it was to display solidarity with the social movement, compared with 11% of the time when it was used to criticize the same movement.3

The third case study examines the Twitter conversation following the deaths of two black men at the hands of police and the shootings of police officers in Dallas and Baton Rouge, Louisiana. This time period – July 5-17, 2016 – had the hashtags of #BlackLivesMatter, #AllLivesMatter and #BlueLivesMatter used more often than any other time since the hashtags began appearing on Twitter in July 2013. And almost overnight, the tone of the online conversation around #BlackLivesMatter shifted following the attacks on law enforcement. There was a dramatic rise in the share of tweets criticizing the Black Lives Matter movement using that hashtag in our July analysis and a drop in the share of tweets that supported the movement. The rise in critical tweets was especially notable after the killing of police officers in Dallas.

The analysis of public tweets, which was conducted using computer coding software from Crimson Hexagon, also found that the volume of race-related tweets tended to peak in the immediate aftermath of high-profile events and reflected more of a synthesis of ideas and reactions than an account of the details of those events.4

Next: 1. Blacks more likely than whites to see – and post – race-related content on social media
← Prev Page
You are reading page1Page2Page3Page4Page5Page6Page7
Next Page →