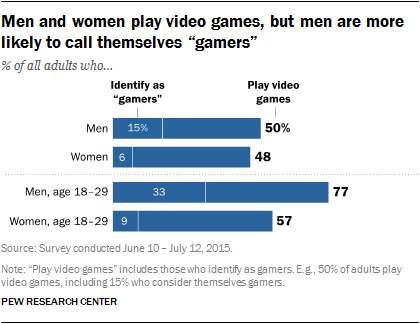 Young adults are particularly likely to play video games, as well as to identify as “gamers.” Two-thirds (67%) of those ages 18 to 29 say they play video games, while 22% say the term “gamer” describes them well.

Young men in particular play games and identify as “gamers.” Fully 77% of men ages 18 to 29 play video games (more than any other demographic group), compared with 57% of young women – a 20-point difference. Additionally, one-third of young men agree that the term “gamer” describes them well, more than three times the proportion of young women (9%) who describe themselves as gamers.

The relationship between gaming and gender is also much different among older adults than it is among younger age groups. In stark contrast to young adults, women ages 50 or older are actually more likely to play video games than men of the same age. Among adults ages 50 and older, 38% of women play video games compared with 29% of men.

Although a notable number of older adults play video games, very few identify as gamers. For instance, just 4% of Americans ages 50 or older feel that this term describes them well. The gender gap in gamer identification also decreases substantially for older age cohorts. As noted above, men ages 18 to 29 are more than three times as likely as their female counterparts to identify as gamers (33% vs. 9%). Among 30- to 49-year-olds, men are twice as likely to identify as gamers (15% vs. 7%). However, among those 50 and older, gamer identification is all but identical between men and women (4% vs. 3%).

While there are no differences by race or ethnicity in who plays video games, Hispanics are more likely than whites or blacks to say the term “gamer” describers them well. Some 19% of Hispanics self-identify as a gamer, compared with 11% of blacks and 7% of whites.

For detailed demographic data on who plays video games and gamer identification, see Appendix B.

Next: 2. Public debates about gaming and gamers
← Prev Page
Page1You are reading page2Page3Page4Page5Page6
Next Page →

Gaming and Gamers
Adults and Video Games
So far, Trump has granted clemency less frequently than any president in modern history
Biden Begins Presidency With Positive Ratings; Trump Departs With Lowest-Ever Job Mark
Almost all U.S. presidents, including Trump, have been Christians
How we know the drop in Trump’s approval rating in January reflected a real shift in public opinion
What Biden and Trump voters say they want the other candidate’s supporters to know about them